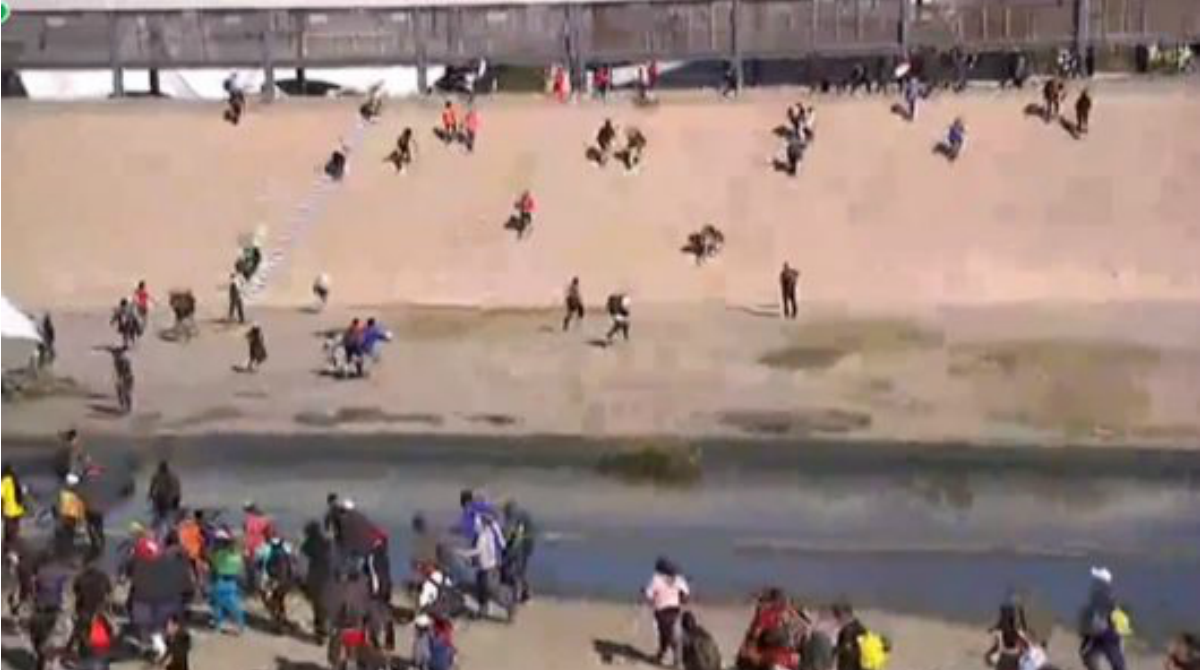 When President Trump called the Central American migrant “caravan” an “invasion”, this was promptly denounced as yet more evidence of his racism.

But of course it was an invasion, as is now plain. Yesterday, US Customs and Border Protection agents shut down the San Ysidro port of entry, among the largest border crossings between San Diego and Tijuana, after hundreds of migrants tried to breach the US-Mexico border fence and threw rocks and other projectiles at border police.

Trump ordered up thousands of troops to repel them. Tear gas and smoke pellets did so. Yet for some people, defending a nation’s borders against thousands of people setting out to overcome border controls by sheer force of numbers is further proof of… well, that nation’s racism and inhumanity.

What’s more, by some ideological alchemy defence becomes attack. One tweet I saw yesterday screamed hysterically that the US was “invading Mexico”. But the US was firing tear gas from inside the US border in order to defend itself against invasion.

The claim that these are asylum seekers was contradicted on CNN by Rodney Scott, the chief Border Patrol agent of San Diego.

“I do not believe that is true. I believe there are definitely people in that group that are trying — that are going to try to claim asylum. The vast majority of those, from what we call the northern triangle are economic migrants, though,” Scott answered.

“What I saw at the border yesterday was not people walking up to Border Agents and asking to claim asylum. Matter of fact, one of the groups that I watched … they passed 10 or 15 marked Border Patrol agents walking … west to east, numerous uniformed personnel, as they were chanting, waving a Honduran flag and throwing rocks at the agents. If they were truly asylum seekers, they would’ve just walked up with their hands up and surrendered, and that did not take place,” he said.

“These folks are apparently going to put babies or toddlers in them and try to surge across the international border with the small children in tow. This isn’t “human desperation”; this is political manipulation, using children as tiny human shields.  The later behavior of the border-rushers clarifies what’s going on.  They laugh, high-five, run around like youthful fools, try to get the best video they can.  Some of them wave Honduran flags and shout as they approach a weak area in the fence (apparently a gate on hinges), where they’ve broken through.  They pile up at the aperture, eagerly watching to see what happens on the other side.  They throw rocks – always a thoughtful approach when seeking asylum in someone else’s country.

“It does mean that what’s happening right now is not spontaneous, it’s not about overriding human need, and that it is false and even vicious to depict it as such”.

Vicious –– and perhaps missing the broader point too. For does anything here ring a few bells? Using a fake narrative of desperate need to camouflage a violent invasion? Using children as “human shields” to facilitate that camouflage? Employing violence against border authorities to produce a reaction that will cause the west’s useful idiots to blame the target country rather than the violent perpetrators?

You got it. Last month I wrote this:

This central American onslaught on the US border looks rather similar to the Gazan onslaught on the Israeli border. Similar optics: poor, downtrodden “refugees” using force of numbers and their own “defenceless” bodies to pit themselves against the firepower of the army of an “oppressive” state in order to storm illegally and (in Gaza) murderously into someone else’s country.

… During his confirmation hearings as Secretary of State, Mike Pompeo also noted that the “toxic crime-terror nexus” in Latin America, largely driven by the Lebanese Hezbollah group, “is fueling both the rising threat of global jihadism and the collapse of law and order across Latin America that is helping drive drugs and people northward into the United States.”

Vice-President Mike Pence told Fox News: “What the president of Honduras told me is that the caravan was organized by leftist organizations, political activists within Honduras, and he said it was being funded by outside groups, and even from Venezuela”.

Hamas runs Gaza. Hamas is trying to storm the Israel border. Hamas is supported by Iran. Hamas has its own deep ties with Latin America.

Join up the dots, folks.