The mainstream media is continuing to betray journalism by framing President Trump’s utterances and policies in a jaw-dropping way.

Two days ago, Trump told a rally he was a nationalist. Pass the smelling salts!

He made it quite clear what he meant by this: that he loved America. He was using it as a synonym for patriotism. Good luck with that one! What he meant was irrelevant. He had apparently damned himself irrevocably as an anti-human. The New York Times reported:

“Asked in the Oval Office on Tuesday why he used that word given its association with racist movements, Mr. Trump professed ignorance of its history but did not back off. ‘I never heard that theory about being a nationalist,’ he said. ‘I’ve heard them all. But I’m somebody who loves our country.” Undaunted, he added: ‘I am a nationalist. It’s a word that hasn’t been used too much. Some people use it, but I’m very proud. I think it should be brought back.’”

What happened then was no less disgraceful for being entirely predictable. Elements of the media claimed he had sent out a racist dog-whistle by using the n-word and had thus revealed himself to be a Nazi. As the Daily Caller reported:

Then there’s the central American caravan. Caravan? A caravan looks like this. 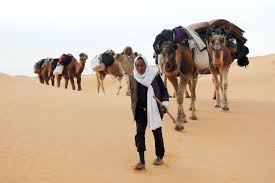 The march of thousands of mainly male would-be migrants marching through Guatemala, Honduras, and El Salvador with the aim of crossing the US border looks like this.

That’s not a caravan. It’s an invasion force.

If Trump doesn’t admit all these people into America, that will apparently prove that his policy of enforcing border controls and stopping illegal immigration is racist. Yet who said this in 2005:

“We all agree on the need to better secure the border and to punish employers who choose to hire illegal immigrants. We are a generous and welcoming people, here in the United States, but those who enter the country illegally, and those who employ them, disrespect the rule of law and they are showing disregard for those who are following the law.

“We simply cannot allow people to pour into the United States, undetected, undocumented, unchecked and circumventing the line of people who are waiting patiently, diligently and lawfully to become immigrants in this country.”

You guessed it: then Senator Barack Obama.