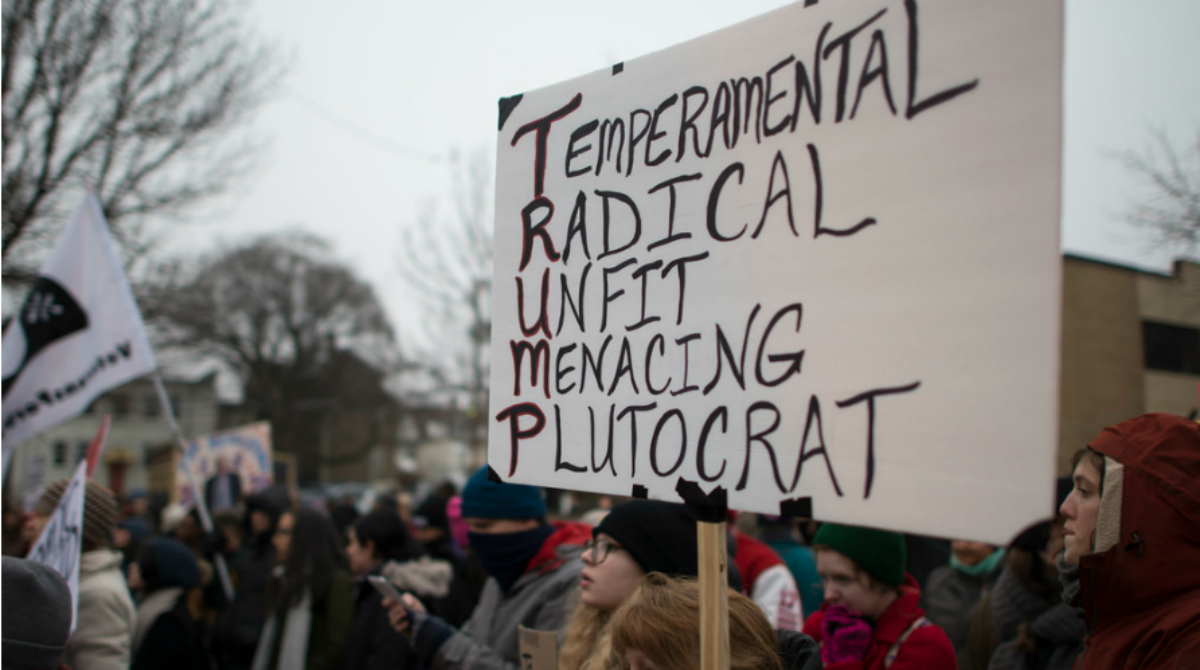 President Donald Trump was brought to power by a cultural counter-revolution: a revolt by millions of Americans against a liberal progressive consensus and the establishment that embodied it.

Those who voted for him want him to overturn that consensus. He promised to do so. In his inaugural address he told them he would keep his word; he would take power away from that establishment and give it back to the people. What we are now seeing, on the streets of America and in its media, is an all-out attempt to stop him.

There are many anxieties to be had about President Trump. There are legitimate concerns about his character and temperament, his volatility and inconsistencies. Nevertheless, the opposition to him being mounted should alarm us more.

For in deeming Donald Trump to be unfit to hold public office, in twisting and distorting what he says and does and then turning him into a vile monster on the basis of those distortions and in accusing him of fascism and Nazism and racism and every other form of evil, his opponents are setting themselves against the very democratic system they supposedly want to defend and are themselves unleashing the hatred and violence they affect to despise.

The reason for such disproportionate, indeed almost pathological behaviour is obvious. Left-wing “progressives” regard themselves as the elect who alone are entitled to wield power. This is because they alone know how society must be refashioned to bring about the transformation of human nature and the utopia of universal equality. The fact that they have now lost power is not just a set back. It simply cannot be allowed to happen.

The extent to which the enormous anti-Trump demonstrations are indeed spontaneous is open to question. There is ample evidence on video of some degree of organisation, at least, by various revolutionary or insurrectionary groups.

A similar aim animates certain Democratic supporters; these have poured big money into creating the grievance culture to bring about the cultural revolution and are now pouring yet more money into protecting their agenda.

Last year, the Politico website revealed that George Soros and other rich liberals, who had wasted tens of millions of dollars trying to elect Hillary Clinton, gathered in Washington under the umbrella of the Democracy Alliance donor club for a three-day, closed door meeting to direct yet more millions to fighting back against Donald Trump. Politico reported:

“If the agenda is any indication, liberals plan full-on trench warfare against Trump from day one. Some sessions deal with gearing up for 2017 and 2018 elections, while others focus on thwarting President-elect Trump’s 100-day plan, which the agenda calls ‘a terrifying assault on President Obama’s achievements — and our progressive vision for an equitable and just nation’.”

All this anti-democratic, subversive or insurrectionary activity is justified on the basis that Donald Trump poses an unconscionable threat to America. The charge that he is a Nazi bigot has been fuelled by the fact that he is supported by white supremacists such as David Duke, the former leader of the Ku Klux Klan. On his website Duke does indeed rave about President Trump; that is to say, what he produces are ravings.

He declares that President Trump has declared war on American Jewish “neocons”, on the “Jewish-elite tribalist establishment” that hates him (well, some of them do indeed hate him but there is no evidence the feeling is mutual), and that he will stop the “insanity” of the Jews’ “treason” against America through their support of Israel.

All of this takes President Trump’s disapproval of foreign military adventures or the depredations of the corporate world and ascribes them entirely falsely to Duke’s own paranoid loathing of Jews. Quite how ludicrous this is can be seen in this priceless passage:

“Is Trump following the dictum of keeping your friends close but your enemies closer?  Is this the strategy when he hangs around Jared Kushner..?”

But he “hangs around” Jared Kushner because Kushner is, of course, the President’s son-in-law as well as his most trusted adviser.

Moreover, those who point to Duke’s endorsement are in effect accepting the deranged ravings of a white supremacist as statements to be treated seriously. Such liberals are thus actually building him up by giving him a status he in no way deserves.

Those who accuse Donald Trump of fascism are not only guilty of what might be called “fascism-denial” by diminishing what fascism actually is and the terrible things it entails. They are also projecting onto the President behaviour which they themselves are guilty of inciting.

The anti-Trump demonstrations in Washington DC, although largely peaceful, were nevertheless marked by thuggery and violence, with masked hooligans hurling bricks and rocks through the windows of shops and offices.

Rabbi Marvin Hier, who blessed the new President at his inauguration, became the target of hundreds of antisemitic messages, including Nazi imagery, from US viewers watching the inaugural events online.

During violent protests at the University of Washington where the defiantly politically incorrect Breitbart News satirist Milo Yiannopoulos was speaking on inauguration day, a demonstrator shot and critically wounded a man. According to a police official, the shooter said the man he shot was “some type of white supremacist.” The previous day, videos showed black-hooded protesters sparking assaults on campus after police had seized wooden dowels, homemade shields, flares, hammers and other items from masked people in the crowd.

We don’t yet know what kind of President Donald Trump will be. But those accusing him of anti-democratic, hate-fuelled and fascist attitudes are themselves displaying and inciting these very qualities.

And with every single thing they do or say, they are proving over and over again just why he was elected.