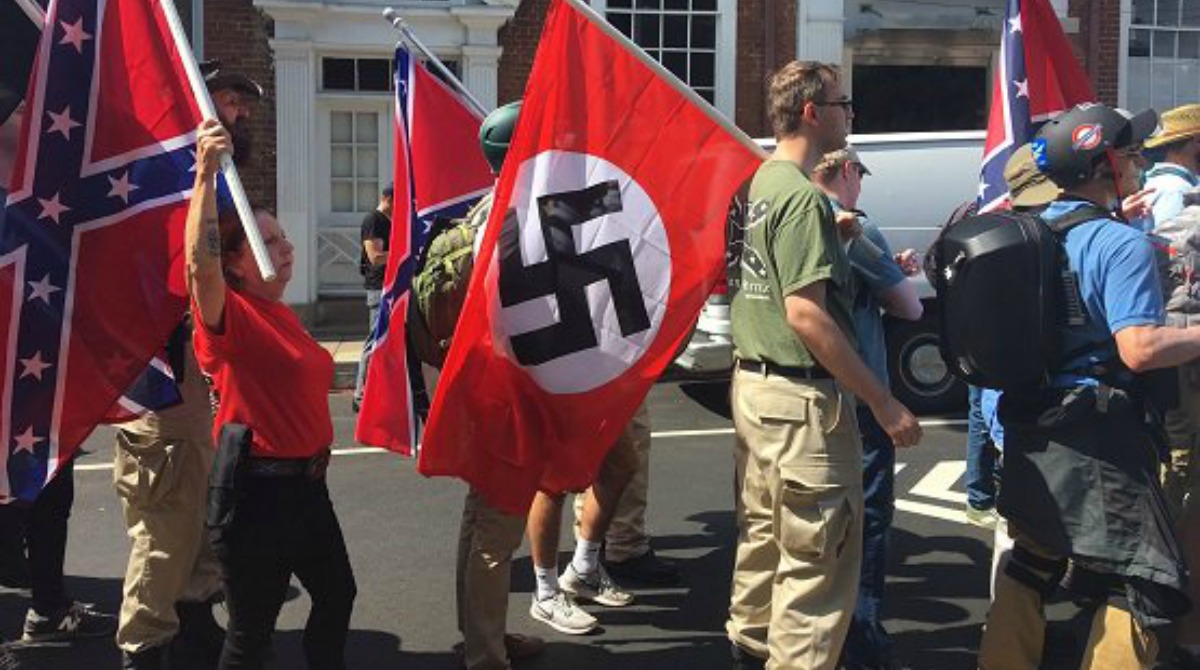 What happened yesterday in Charlottesville, Virginia was dreadful and frightening on several levels.

The first shocking thing was just the very sight of neo-Nazis and white supremacists openly parading with swastika flags, demonstrating their bigoted, hateful and violent ideology.

The next horrible thing was the violence that broke out between the neo-Nazis and counter-demonstrators. It’s unclear who started it, but there is evidence that at least some of it was unprovoked on both sides.

There was then a shocking car-ramming terrorist attack against anti-Nazi demonstrators which killed one person and left several others injured. The driver is widely assumed to have been a white supremacist supporter; although a man has been arrested and charged with second degree murder, at time of writing it has not been confirmed that he was the driver.

All of this was absolutely terrible.

What’s even more frightening is the violence increasingly erupting in America, as it did in Charlottesville, between two types of people who perpetrate hatred and intolerance, stand against freedom and reason and seek to impose their view of society and human nature by force.

For this battleground does not set fascists against anti-fascists. It is a clash between two armies of demagogues, each worshipping power and violence and smashing anyone who stands in their way. “Antifa” are not, as their name declares them to be, anti-fascists. They are fascists of the left – and in their Black Lives Matter incarnation, anti-white racists too.

What’s yet more appalling still is the double standard being used and the way in which the alt-left have seized upon these events in order to smear Donald Trump by association.

The fact that the former Ku Klux Klan “grand wizard” David Duke – who was at the Charlottesville demonstration – claims to support Trump’s agenda is being used by the alt-left to smear Trump himself as a white supremacist. In other words, Trump is being defined by these particular supporters.

The hypocrisy here is breathtaking. Under President Obama, America was repeatedly subjected to race riots with demonstrators running amok, inciting violence against the police and trashing and looting stores. Since these violent demonstrators were overwhelmingly likely to have been Obama supporters, did the alt-left conclude that Obama himself – who consistently blamed the police – was responsible for black thuggery? Of course not. They blamed the police too.

Since Trump’s ascendancy began, there has been repeated violence against Republicans at Trump rallies by anti-Trump demonstrators. Does the alt-left conclude that, because these demonstrators are Democratic party supporters, the Democrats are thugs themselves?

Last June, the House Republican whip Steve Scalise was shot and almost killed by a left-wing terrorist with a history of extreme anti-GOP views, who opened fire on a group of Republicans at a baseball practice. Did alt-left demonstrators take to the streets after this to declare “Not in my name”?

Er, not quite. A Union County Democratic party operative, James Devine, posted on his Facebook page: “I have little sympathy for the Republican congressman who got shot today because he viciously opposed President Obama’s effort to reduce gun violence and instead, he accepted more gun lobby money than all but 15 other members of the House of Representatives” (clearly, that guy needs an irony transplant). Another Democratic party official in Nebraska was fired after saying he was “glad” Scalise was shot.

So why are people like these regarded as one-off mavericks with no significance for the left-wing causes they support, while Trump is repeatedly tarred with the “white supremacist” brush?

After Charlottesville, Trump condemned “in the strongest possible terms” what he called an “egregious display of hatred, bigotry and violence on many sides”. He was immediately and severely criticised, including by several Republicans, for not having specifically singled out the white supremacists for condemnation.

Why didn’t he do so? Well, maybe he doesn’t care for being bullied into stating what he considers should be perfectly obvious: that they are utterly beyond the pale and that he does not in any way support them. Maybe he thinks that to make that kind of statement inescapably acknowledges there might be some doubt that he thinks this. Maybe he feels strongly that, as stated above, both warring sides at Charlottesville had unconscionable agendas.

Nevertheless, he was wrong not to have been more specific. He is not a private citizen being defamed by a “when did you stop beating your wife” kind of character assassination (bad as that would be). He is the President of the United States, and as such he has responsibility to use his high office to delineate the contours of what is socially acceptable and what is beyond the pale.

Accordingly, it wasn’t enough to condemn violence and hatred on all sides. That vague formulation just doesn’t get to the points that needs to be made. He should have specifically condemned white supremacism, spelling out that this has absolutely nothing to do with the American patriotism animating the vast majority of his 63 million voters. At the same time, he should have specifically condemned the hateful ideology of left-wing identity politics.

So he didn’t say what a president should have said. Nevertheless, smearing him with the racist and fascist attitudes of the few thousand (maximum) with those views who say they support him is grotesque.

A person is not defined by those who support him. There are people with all kinds of agendas who support folk for one perverse reason or another. Indeed, in last year’s presidential campaign Hillary Clinton was endorsed by none other than Will Quigg, “grand dragon” of the Ku Klux Klan’s California chapter.

“We want Hillary Clinton to win. She is telling everybody one thing, but she has a hidden agenda. She’s telling everybody what they want to hear so she can get elected, because she’s Bill Clinton’s wife, she’s close to the Bushes. [But] once she’s in the presidency, she’s going to come out and her true colours are going to show.

‘“Border policies are going to be put in place. Our second amendment rights [favouring gun ownership] that she’s saying she’s against now, she’s not against. She’s just our choice for the presidency.”

Off the wall? Of course. Just like David Duke’s tweet during Trump’s inaugural presidential speech in which Duke celebrated Trump (a notably pro-Jewish president) declaring “war” on a perceived Jewish agenda. Yet on another occasion he claimed “Trump has made it very clear that he’s 1,000 percent dedicated to Israel, so how much is left over for America?” (since that’s a view with which the anti-Zionist left would fervently agree, does that make them by their own lights David Duke promoters?) And now Duke has also criticised Trump’s Charlottesville remarks – for condemning white supremacists as well as the left.

The point is that, whether such remarks by the likes of Duke are political mischief-making or just plain crazy, they are not be be taken seriously for one moment. Yet the alt-left is doing precisely that, thus hugely inflating the importance and status of a few thousand cranks who should be consigned to the oblivion on the fringes of society that they richly deserve.

The useful idiots of the alt-left are now carrying out both parts of that neo-Nazi agenda to the letter. Charlottesville was the latest such sortie. It won’t be the last.