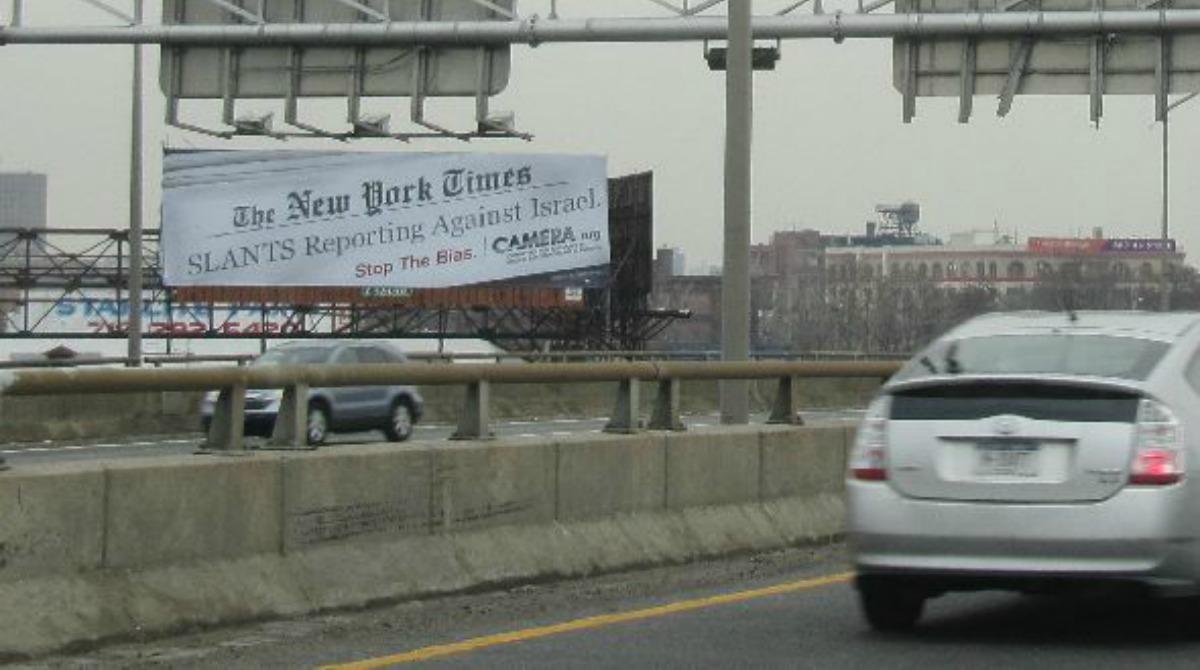 A recent column by Bret Stephens in The New York Times was headlined “Donald Trump is bad for Israel.”

Others may think a more appropriate headline would be: “The New York Times is bad for Israel.”

The paper is regarded as the bible of America’s intellectual classes. Yet for years, its coverage of Israel has been a disgrace.

Of course, it’s entitled to criticize Israel as it would any other country. But it doesn’t treat Israel like any other country. It singles it out for demonization based on falsehoods, distortion and selective reporting which makes no attempt at objectivity, fairness or truth.

Last weekend, it published a 4700-word story on the life and death of Rouzan al-Najjar, a young Gazan female doctor who was killed during the riots on the southern border last June.

The story, by its Jerusalem correspondent David Halbfinger, oozed sympathy for al-Najjar and her cause. It described the rioters as “protesters”, obscuring their leaders’ aim of storming the border to murder Israelis.

It presented Al-Najjar’s death with studied but false equivalence as part of a “cycle of violence” with simplistic “narratives” on either side.

Israelis were then portrayed as trigger-happy killers who “obliged” Hamas’s aim of using bloodshed to win international sympathy and whose snipers – despite the IDF’s stated tactic of aiming at rioters’ legs unless they presented an immediate danger – deliberately shot Gazan civilians in the back.

This included al-Najjar. It was only towards the end that the story revealed she was in fact killed accidentally, when an Israeli bullet struck the ground away from her and ricocheted into her body.

This epic account resulted from a six-month investigation by Halbfinger and six others. They collected 30 testimonies and more than 1,000 pictures and videos. That’s a tremendous financial and human investment for just one story.

Yet one week after al-Najjar’s death, the IDF had said it was accidental. Despite all their time and effort, The New York Times couldn’t shift from the fact that it was an accident. But they still dressed it up improbably as a likely war crime.

Yet they didn’t suggest that Hamas was guilty of war crimes thousands of times by setting out to murder innocent Israelis. They skated over the missile attacks from Gaza, the terror tunnels, the fact that Israelis were forced to live in bomb shelters.

Instead, the paper produced a radically decontextualized and tendentiously slanted version to obscure the fact that Israel was defending itself against a genocidal onslaught, and wickedly depicted it instead as a criminal aggressor.

The malicious distortion of Israel by the Times has been doggedly chronicled by CAMERA, the Committee for Accuracy in Middle East Reporting in America.

Its 2018 timeline for the paper’s biased reporting of Israel includes describing a deadly Palestinian attack on Israelis waiting at a bus stop as “bold,” a word later removed from the story; quoting twice as many critics of Israel as supporters in its Oslo accords 25th anniversary coverage – which obscured Palestinian rejectionism and falsely presented Israel as the aggressor; portraying campaigners against antisemitism as “squelching” Palestinian rights; describing Palestinian arson attacks as “ingenious”; characterizing the well-documented fact that the Palestinian Authority pays hundreds of millions of dollars to terrorists’ families as a “far Right conspiracy”; and on and on.

Moreover, the paper goes to quite extraordinary lengths to smear Israel. When the Saudi dissident Jamal Khashoggi was reportedly murdered in the Saudi consulate in Istanbul last year, the Saudi crown prince was (rightly or wrongly) held responsible.

But in its online edition, The New York Times headlined its story: “Israeli Software Helped Saudis Spy on Khashoggi, Lawsuit Says”. It said that a Saudi dissident close to Khashoggi filed a lawsuit claiming that an Israeli software company helped the Saudi royals take over his smartphone and spy on his communications with Khashoggi.

The paper said the lawsuit was filed by an Israeli lawyer, Alaa Mahajna, in cooperation with a lecturer at London’s City University, Mazen Masri. Although it identified Mahajna as an Israeli, it failed to mention Masri’s work as a legal adviser to the Negotiations Affairs Department of the Palestine Liberation Organization.

The paper’s troubling problem with Israel seems to have deeper roots. In its book review pages recently, novelist Alice Walker recommended the book And the Truth Shall Set You Free by the virulent antisemite and conspiracy theorist David Icke.

Along with suggesting that the world is run by a cabal of giant shape-sifting lizards – many of whom happen to be Jews – his book endorses as genuine the 19th century antisemitic hoax The Protocols of the Elders of Zion.

Walker herself has form in this regard. In 2017, she posted on her blog an antisemitic poem, “It is Our (Frightful) Duty to Study the Talmud”. In this, she asks: “Are Goyim (us) meant to be slaves of Jews?” “Are three year old (and a day) girls eligible for marriage and intercourse? Are young boys fair game for rape?”

When asked why the paper hadn’t questioned Walker over her choice of book, the paper’s literary editor, Pamela Paul replied: “The people’s answers are a reflection of their opinions, tastes and judgment.”

So for The New York Times, antisemitism is just a matter of taste or judgment.

Last weekend, the paper published a fawning profile of Representative-elect Ilhan Omar, skating over her deeply disturbing record of promoting anti-Israel falsehoods and antisemitic conspiracy theories and depicted her critics as bigots.

These appalling attitudes towards Israel and the Jews take on an even more disturbing character given that the paper has long been owned by Jews, the Ochs-Sulzberger family.

This clan has been characterized over the generations by distinctly equivocal attitudes towards Judaism and Jewish identity.

Notoriously, it failed to give adequate coverage to the Holocaust. Arthur Hays Sulzberger, the publisher during that era, was said to have experienced antisemitism and was worried about his paper being perceived as too Jewish.

In a 2001 article on its 150th anniversary, former Executive Editor Max Frankel wrote that Sulzberger “believed strongly and publicly that Judaism was a religion, not a race or nationality – that Jews should be separate only in the way they worshiped.

“He went to great lengths to avoid having the Times branded a ‘Jewish newspaper.’” As a result, his editorial page “was cool to all measures that might have singled [Jews] out for rescue or even special attention.”

It would seem that not much has changed. To fend off antisemitism, the paper’s owners allow it to buy into antisemitism itself.

The paper might merely be thought to display hostility to Israel generally exhibited in progressive intellectual circles. But its obsession with bashing Israel, together with its reluctance to acknowledge Jew-hatred, suggests something more pathological is in play at The New York Times.