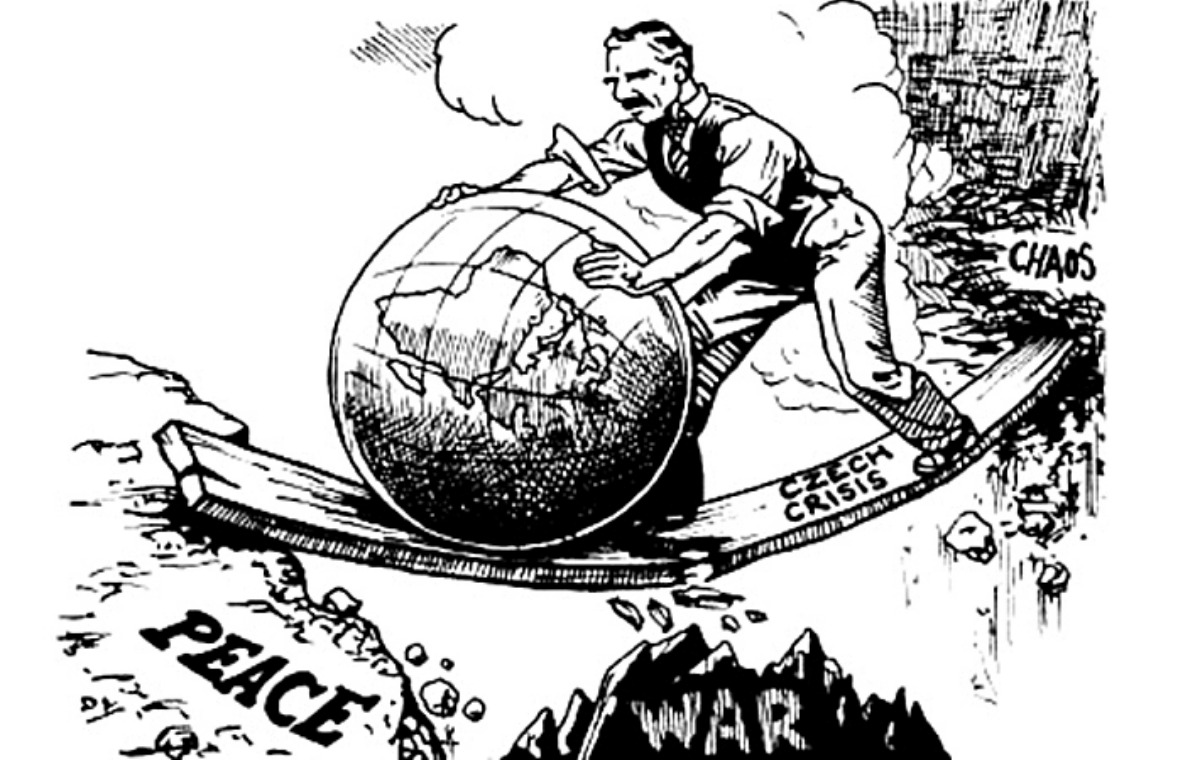 There have been extraordinary scenes in cinemas throughout the United Kingdom. People have leapt to their feet in standing ovations, and grown men have been weeping. The source of the emotion? The wartime speeches of Winston Churchill in the movie “The Darkest Hour.”

It’s not just because of Gary Oldman’s tremendous performance as the former prime minister. The movie has touched something very deep in the British psyche: the call to summon all one’s courage and resolution to defend their nation.

Showing how the nation’s previous prime minister, Neville Chamberlain, vainly tried to appease Adolf Hitler, the movie illustrates the catastrophic error of trying to compromise with a regime whose agenda brooks no compromise.

Hitler’s invasion of Czechoslovakia in March 1939 demonstrated the vacuity of Chamberlain’s declaration in 1938 after Munich of “peace in our time.” Only when Hitler invaded Poland in September of that year did Britain finally go to war.

Victory over fascism was accordingly a close-run thing. But the point is that Britain launched a pre-emptive strike. It realized that the attack on Poland showed Hitler posed a direct threat to its own nation and needed to destroy that threat before the Nazis got any closer.

So let’s have a little thought experiment. Suppose Britain hadn’t gone to war after the invasion of Poland because it was more than 1,000 miles away. Suppose it had sat on its hands while Hitler invaded France and reached the French coast. Suppose he then sent a bomber from France on an exploratory raid across the English Channel, all the while declaring his intention to wipe the United Kingdom off the map.

Suppose he had also taken effective control of the government of Ireland, where he embedded upwards of 150,000 missiles all pointing at England. And suppose, at the same time, he infiltrated his forces into Scotland, from where he was helping the hostile Scots fire rockets at England and tunnel underneath the border in order to ambush and murder English men, women and children.

Absurd? Preposterous? Of course. If England had allowed Hitler to encircle it like that, it would almost certainly have become a Nazi-occupied state in Nazi-occupied Europe. At best, it would have seen countless more British citizens killed before it won the war it so belatedly joined. Even in the appeasement-minded ’30s, it would never have allowed itself to be put in such a situation.

This is precisely the position in which Israel finds itself. Iran’s proxy army, Hezbollah, has 150,000 missiles pointing at it from Lebanon; Iranian militias are staked out in Syria and Gaza. The Iranian regime regularly declares its genocidal intention to wipe Israel out altogether.

Yet when Iran, which has threatened to destroy Israel, sent a military drone into Israel and shot down an Israeli warplane, Europe tut-tutted when Israel wiped out half of Syria’s air defenses in retaliation.

These remarks elicited no more than a yawn from the Western media, which sneered that Netanyahu was merely trying to deflect attention from his own internal legal difficulties. His analogy, however, is frighteningly correct. And once again, the United Kingdom is in full appeasement mode.

It was and still is a principal enthusiast for the nuclear deal. It believes the policy will help the regime’s “reformers” against the extremists, ignoring the fact that the only person who matters in Iran is the Supreme Leader, who is an unconscionable fanatic.

And it has also ignored the fact that Iran has been at war with the West for a quarter of a century, and that it killed British and other coalition forces in Iraq with its roadside bombs.

Astoundingly, the United Kingdom tells itself instead that the deal—which has allowed money to pour into Iran to strengthen its war machine and increase its power throughout the region, and which will give it the power to make nuclear weapons in a few years’ time, if not earlier—has neutralized the Iranian threat.

Unfortunately, we are where we are, and the deal itself is difficult to undo. Still, sanctions should be imposed upon Iran for its human-rights violations, support for terrorism and ballistic-missile activities.

Britain still wants to appease Iran. Perhaps this isn’t surprising. For the alarming fact is that while the British have voted to reassert the independence of their nation by leaving the European Union, their nation no longer has the capacity to defend itself.

From 2010, its military capacity has been cut by between a third and a half—and by two-thirds since 1997.

Former U.K. service chiefs have launched a devastating critique of the state of British forces, saying they are no longer fit for purpose, and that the army is 20 years out of date.

Britain believes that it can avert war not through maintaining its capacity to defend itself but, laughably, through soft power and international aid. Even if such aid actually reached the vulnerable for whom it is intended, rather than disappear into the pockets of corrupt regimes, it’s clearly no substitute for the capacity to defend the nation with battleships and warplanes.

This shocking weakness is part and parcel of the deep demoralization of Britain, which in the past half-century lost faith in itself as a nation—a demoralization that the Brexit vote offers the first hope of reversing.

There are ominous signs that a terrible war is looming in the Middle East, and the West cannot be a bystander. It looks as if history is about to repeat itself, with Britain once again being catastrophically unprepared. And this time, there is no Churchill to prevent national disaster by the force of his own character and use of the English language that he weaponized and sent into battle for the cause of freedom.

If Churchill were alive today, he would surely be doing two things: supporting Israel in its fight against the genocidal fanatics of the Iranian regime and, true to his nature, leading the call to battle himself.