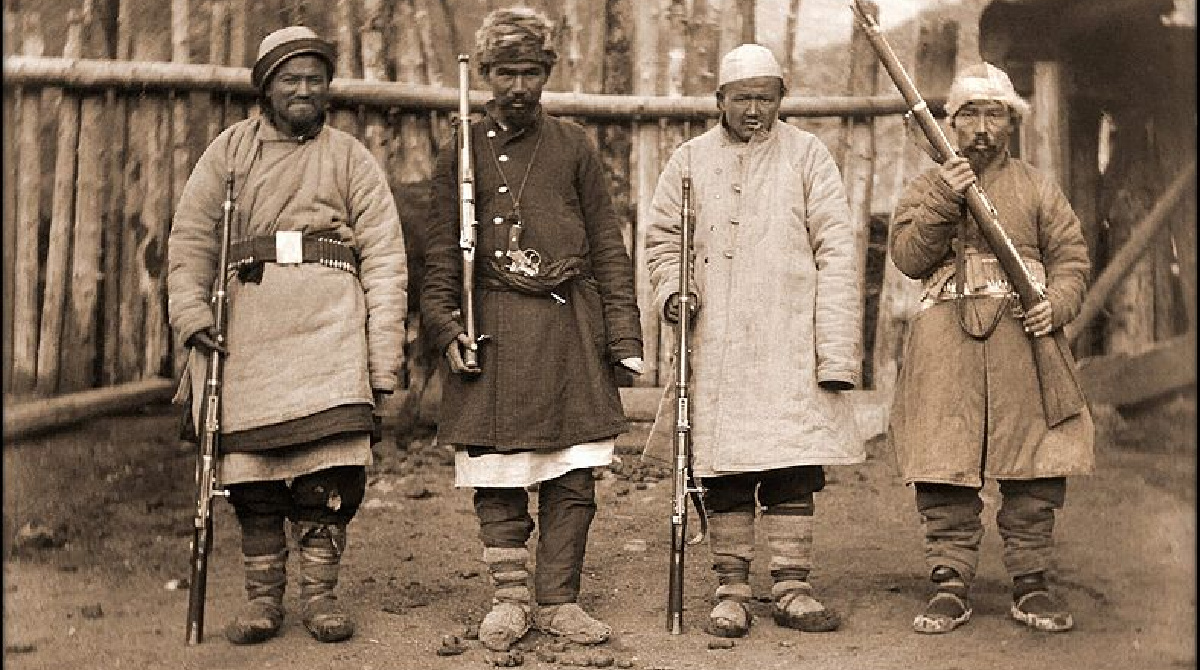 I am pleased to see that the plight of the Chinese Uighurs, which I noted last year here and again here, is now finally on the public agenda having been ignored for so long.

On Sunday’s BBC Andrew Marr Show, China’s ambassador to the UK, Liu Xiaoming, tried to claim the Uighurs were not being abused, even as he was shown video footage of shackled members of that community being herded onto trains.

It is astonishing (or at least would be in any sane universe) that so-called progressives, who denounce “Islamophobes” at every opportunity and who obsessively single out Israel for false demonisation while ignoring – let alone threatening to boycott – China and other global tyrannies, have remained silent until now about the persecution of the Muslim Uighurs at the hands of the Chinese Communist Party.

It’s as if the current volte-face by Britain’s political establishment, which as a result of China’s role in the coronavirus pandemic has suddenly decided that it has been posing an unconscionable security threat to the west for years, has given those whose default position is to bash the west permission to start telling the truth about the depravities of a regime within the developing world.

The CCP’s treatment of the Uighurs and other Muslims is horrifying. Documents smuggled out of China and leaked to the New York Times last year revealed Chinese President Xi Jinping’s directives to round up and incarcerate the country’s million or so Muslims in detention camps.

President Xi claims that the purpose of these camps is to protect the country from Islamic radicalism. There is such a history, but the repression goes much further.

It has been most extreme in the province of Xinjiang. This enjoyed two brief periods of independence from China, 1931-1934 and 1944-1949. From 2008, terrorist attacks in the area were carried out against the Han Chinese by the East Turkestan Islamic Movement (ETIM) and other insurgent groups, such as such as the East Turkistan Liberation Organisation, in their campaign to establish an independent Uighur Republic.

As the former Pentagon expert on Chinese and Islamic affairs Dr Harold Rhode has explained:

“Uyghur irredentism, coupled with increasing Muslim extremism, found support from Bin Laden’s Al Qaeda in Afghanistan and the Taliban in Pakistan and Central Asian republics after the fall of the Soviet Union in 1991.

“That led to armed Uyghur separatist attacks under the banner of the East Turkistan Islamic Movement. This Muslim extremist separatist group, recognised as a foreign terrorist organisation by the US State Department seeks to establish a supra-national Turkic-state composed of ‘sections of Turkey, Kazakhstan, Kyrgyzstan, Uzbekistan, Pakistan, Afghanistan, and the Xinjiang Uyghur Autonomous Region (XUAR)’. According to a US State Department study, Uyghurs have received ‘training and funding’ and joined the ranks of Al Qaeda fighting US and coalition forces in Afghanistan”.

These groups carried out numerous deadly terrorist attacks against Han Chinese from 2008 onwards and have been involved in other violent episodes.

President Xi’s response, which started with draconian bans on beards and headscarves, then escalated. The documents smuggled out of China have revealed a horrifying strategy of repression. And although in these documents President Xi stated he did not want to wipe out Islam in China altogether, the measures themselves look like an attempt to turn these Muslims from religious believers into indoctrinated supporters of the CCP.

“Within months, indoctrination sites began opening across Xinjiang — mostly small facilities at first, which held dozens or hundreds of Uighurs at a time for sessions intended to pressure them into disavowing devotion to Islam and professing gratitude for the party.

“Then in August 2016, a hard-liner named Chen Quanguo was transferred from Tibet to govern Xinjiang. Within weeks, he called on local officials to ‘remobilize’ around Mr. Xi’s goals and declared that Mr. Xi’s speeches ‘set the direction for making a success of Xinjiang’. New security controls and a drastic expansion of the indoctrination camps followed.”

Detainees have been subjected to a “re-education” program that includes what one escapee described as horrific physical abuse, including forced organ removal, abortions and medical “experiments”.

Another smuggled document has revealed more about the scale and purpose of these abuses. As the BBC reported in February:

“In early 2017, when the internment campaign began in earnest, groups of loyal Communist Party workers, known as ‘village-based work teams’, began to rake through Uighur society with a massive dragnet.

“With each member assigned a number of households, they visited, befriended and took detailed notes about the ‘religious atmosphere’ in the homes; for example, how many Korans they had or whether religious rites were observed.

“The document detailed how China has used the concept of ‘guilt by association’ to incriminate and detain whole extended family networks in Xinjiang… In fact, the title of the document makes clear that the main individuals listed all have a relative currently living overseas – a category long seen as a key indicator of potential disloyalty, leading to almost certain internment”.

The document gives many reasons for internment. “The most frequently listed is for violating China’s strict family planning laws. In the eyes of the Chinese authorities it seems, having too many children is the clearest sign that Uighurs put their loyalty to culture and tradition above obedience to the secular state.”

Nor is such repression confined to the Uighurs of Xinjiang. Last year, Emily Feng reported that the regime was cracking down on the Hui Muslims, China’s third largest minority, who are concentrated in the Ningxia region and who do not share the radical profile of the Xinjiang Muslims.

“…since April 2018, Hui mosques have been forcibly renovated or shuttered, schools demolished, and religious community leaders imprisoned. Hui who have traveled internationally are increasingly detained or sent to re-education facilities in Xinjiang.

“…Imams in Henan and Ningxia must now attend monthly training sessions that can last for days. There, imams told NPR, they are taught Communist ideology and state ethnic policy and discuss Xi Jinping’s speeches. Imams must then pass an exam testing their ideological knowledge in order to renew their license each year, mirroring how the government issues licenses to imams in the Xinjiang region”.

Appalling. But that’s what the Chinese Communist Party does. Who can be surprised?