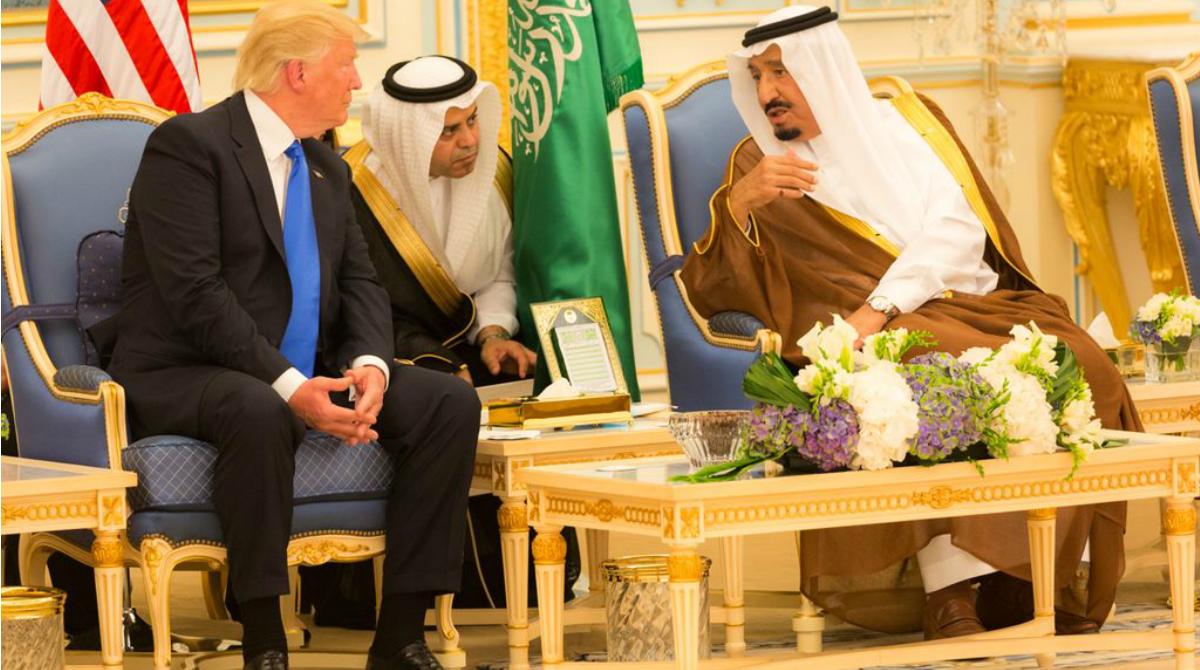 Now it becomes clear why President Trump selected as the destinations of his current tour Riyadh, Jerusalem and Rome. He is re-setting the foreign policy debate around the factor which is both fundamental and at the same time systematically ignored. He is reframing it as a conflict over religion.

Not that he is describing it in Samuel Huntington’s terms as a war between civilisations. He reportedly told his son-in-law and key strategist Jared Kushner to construct a tour around the theme of reconciliation and world peace.

Nevertheless, he’s doing something which no previous president has done: making religion the central issue in promoting that goal of reconciliation and peace. And that means he sees the conflicts roiling the world as being over precisely that issue of religion; and more specifically, the clash between Islam and the rest.

That’s why in his Riyadh speech he invoked the name of God on multiple occasions. That’s why he made a visit today to the Church of the Holy Sepulchre and the western wall of the ancient Jewish Temple in Jerusalem – where he was unaccompanied by Israeli dignitaries, presumably to emphasise he was making no political point but rather performing an act of piety and respect and thus pointing out the centrality of these sites to Christianity and Judaism. And that’s why he is to visit the Pope in the Vatican.

He’s saying that in order to end the political conflict between east and west, the three faiths of Islam, Judaism and Christianity must first broker peace between themselves.

And that means he’s doing something no US president has yet dared to do: naming the Islamic jihad for what it is – a war of religion. And he went into the very belly of the beast, Saudi Arabia, to say it.

For he not only excoriated the Saudis’ arch-enemy Iran, but put the Kingdom on notice that it needs to reject the violent extremism it itself has spawned.

Well, that could hardly have been a clearer demand of his hosts.

He used language that is correct but virtually no western leader will use, calling on the Kingdom to confront “the crisis of Islamist extremism and the Islamist terror groups it inspires. And it means standing together against the murder of innocent Muslims, the oppression of women, the persecution of Jews, and the slaughter of Christians.”

Even more strikingly, he couched the failure to abandon religious violence in terms of eternal damnation:

“Religious leaders must make this absolutely clear: Barbarism will deliver you no glory – piety to evil will bring you no dignity. If you choose the path of terror, your life will be empty, your life will be brief, and YOUR SOUL WILL BE CONDEMNED.”

On Israel and the Arabs, it’s a pity he has not said what needs to be said: that the idea of a Palestine state is a red herring to mask the real goal of exterminating Israel. But at the same time, he hasn’t said there needs to be a Palestine state; so far he has stuck instead to platitudes about children living free from violence and so forth.

Moreover, he observed that Saudi Arabia was the “custodian of the two holiest sites in the Islamic Faith.” That’s Mecca and Medina. Not, of course, Jerusalem. The claim that Jerusalem is Islam’s sacred site, made repeatedly by proponents of Palestinian mythology, is a lie. Trump’s pointed omission will have been noted by those who need to note it.

What Saudi King Salman did and said on this visit was itself highly significant. Yes, he claimed in Orwellian fashion that Islam was a religion of “mercy, tolerance and co-existence”. But he also said that achieving peace between the Palestinians and the Israelis was “a just and necessary quest that requires joint sacrifices” [my emphasis], and he also spoke of the Kingdom’s keenness to invest in the “empowering of women”.

There were several other signals on this visit of a more pragmatic approach. The president’s wife and daughter wore no head coverings, and neither did women who attended the various functions; the King nevertheless even shook Melania’s hand. And Trump made the first direct flight from Riyadh to Israel’s Ben Gurion airport.

These things may sound small beer but their symbolism is important. It’s also unlikely that the King would have been unaware in advance of the more sensitive parts of Trump’s speech; the King’s response endorsing this call to arms against his own co-religionists was remarkable.

True, Trump hasn’t called out the Palestinians on their big lie that they have legal and historical rights to the land.

As of yesterday, however, the so-called Israel-Palestine conflict has been reframed in the context of the need to achieve peace between religions. In other words, the conflict has been tacitly reframed as fundamentally an Islamic religious war. As such, it follows that a) it cannot be a dispute over land boundaries and b) it puts Israel on the same side as the west.

Trump’s tour is not yet over and his position may change. Maybe he will come out with some pro-Palestinian statement. His Riyadh speech wasn’t perfect: several things he said grated. The King may have been speaking in turn with forked tongue. And there are great dangers in this huge US arms deal with the Kingdom: those weapons weaken Israel’s defences; and if the fragile Saudi monarchy should fall to Isis, al Qaeda or Iranian proxies, this US-manufactured armoury might be turned against America itself.

For the moment, though, President Trump has joined up the dots in the Middle East to create a picture which has never been drawn before but is long overdue.

UPDATE: Israelly Cool points out that, when he delivered his Riyadh speech, President Trump deviated from the printed text in the following way:

“That means honestly confronting the crisis of Islamic extremism and the Islamists and Islamic terror of all kinds. We must stop what they’re doing to inspire because they do nothing to inspire but kill and we are having a very profound effect if you look at what’s happened recently. And it means standing together against the murder of innocent Muslims, the oppression of women, the persecution of Jews, and the slaughter of Christians.”