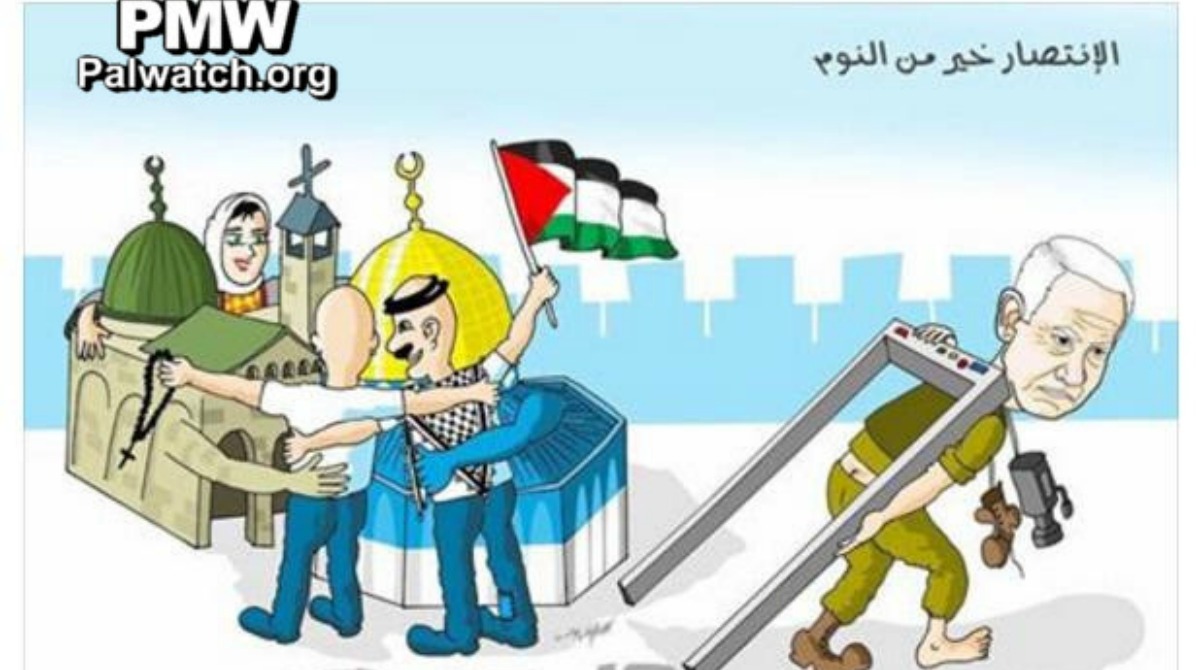 I wrote here that Israel’s removal of the metal detectors from Temple Mount was a mistake, and that those in the west approving of the move merely showed how badly they failed to understand the Arab Muslim religious war against the Jews.

On the day the metal detectors were removed I attended a meeting in Jerusalem where Israel’s minister for housing, Yoav Galant, said erecting the barriers had been “a mistake”.

Staggered by this language which played directly into the Arab and Muslim “strong horse” mindset in which any retreat is viewed as a signal to redouble the attack, I asked Galant whether such a move wasn’t going to be taken as a sign of weakness which would merely incentivise more violence. “No!” he snapped before stalking off.

It was subsequently reported that Galant had been the prime mover inside the Israeli security cabinet to get the metal detectors removed.

What has followed, however, has been as predictable as it is alarming. The Palestinian Arabs have been crowing that they have Israel on the run. That has accordingly galvanised them to further violence, rioting on Temple Mount and attacking from this supposedly sacred Islamic space Jewish worshippers praying at the Western Wall. (It was a attack from al Aqsa upon Israeli police officers, two of whom were murdered, which led to the metal detectors being installed in the first place).

Palestinian Authority leaders then endorsed two weeks of Arab rioting at Temple Mount, calling on Palestinians to “rage” and “come to the defence of al Aqsa” against the entirely fictional threat from Israel.

Palestinian Media Watch published the cartoon reproduced here which Fatah (the party of the “moderate” Mahmoud Abbas) posted on its Facebook page and whose text PMW translates as “Victory is better than sleep”. It also published another showing metal detectors running away from cheering Arabs at the Dome of the Rock on Temple Mount.

The message is that Israel gave in to terror. That is the worst possible message Israel could have given.

Bassam Tawil underscores here the implications of this debacle.

“We have reached a new level in this discourse: Palestinian Authority (PA) officials are now openly admitting that it is not the metal detectors or security cameras that are at issue.

“Instead, they admit, this is a battle over sovereignty on the Temple Mount and Jerusalem. For the Palestinians, the real battle is over who controls Jerusalem and its holy sites. The real battle, in their eyes, is over the Jews’ right to live in their own state in the Middle East. Many Palestinians have still not come to terms with Israel’s right to exist, and that is what this battle is really about.

“The Palestinians, feeling triumphant now that Israel has complied with their demand to remove the metal detectors and security cameras, have been clarifying that it is only the first step in their fight to eradicate any Israeli presence in the Old City of Jerusalem and the Temple Mount.”

In other words, Israel was trapped into a series of events which would galvanise another escalation of the Arabs’ war of extermination being waged against it. So how could the Israelis have been trapped like this?

Many cite incompetence. Others, though, spy the footprint of another malevolent and highly manipulative actor: the Islamic Republic of Iran. Israel Hayom reports that the violence in and around Temple Mount was at least partly fuelled by Iran – to the displeasure of the PA leadership. It quotes an unnamed PA official saying:

“It is plainly obvious that the government in Tehran, by way of its long tentacles, was behind these efforts,” the official said. “This involves millions of shekels, and it appears that the Iranians have found a way to cash in on this and to make it clear to the Palestinians that Iran is taking care of them.”

Another PA official is quoted claiming that the Israelis have allowed Iranian influence to develop amongst Israeli Arabs.

“This would have not taken place in areas under Palestinian control. We would have never let Iran establish such a foothold because this would have hit us like a boomerang, by prompting action from Arab states,” the official said. “Perhaps the Iranians understood they could undertake this effort without Israeli authorities asking too many questions.”

Really? Is that last claim likely?

For Liel Liebowitz in Tablet, the trail leads from the northern Israel branch of the Islamic Movement, whose leader was recently jailed by Israel in large part for having links with an Iranian agent, to the Iranian regime whose proxy army Hezbollah is poised to move right up to Israel’s Syrian border as a result of Russia’s US-approved deal to monitor two Syrian “safe zones”.

Liebowitz writes: “How did Iranian cash and intel find its way to Umm al-Fahm and Jerusalem and beyond? That’s a question for Israel’s capable intelligence services. But Netanyahu, a supremely gifted political operative, didn’t need to stick around and wait for an answer. He understood two things: first, that he was witnessing a finely orchestrated play unfurling at his doorstep; and second, that if he hit back hard, Donald Trump wouldn’t be there to back him up (my emphasis). And so he played the only card available to him—backing down and thanking both Trump and the Jordanians for their part in de-escalating the conflict, which is all the proof you need that neither the Jordanians nor Trump had any real role to play.”

These theories merely add to the swirling fog of conjecture about these troubling developments. What is clear, however, is that the Palestinian Arabs are jubilant. And far from the despair which the west assumes motivates them to “resist”, it is the exultation that they are advancing towards their infernal goal of exterminating Israel and driving out the Jews from their rightful home in Jerusalem which is, alas, likely to result in another twist to their spiral of west-financed hatred, incitement and murder.