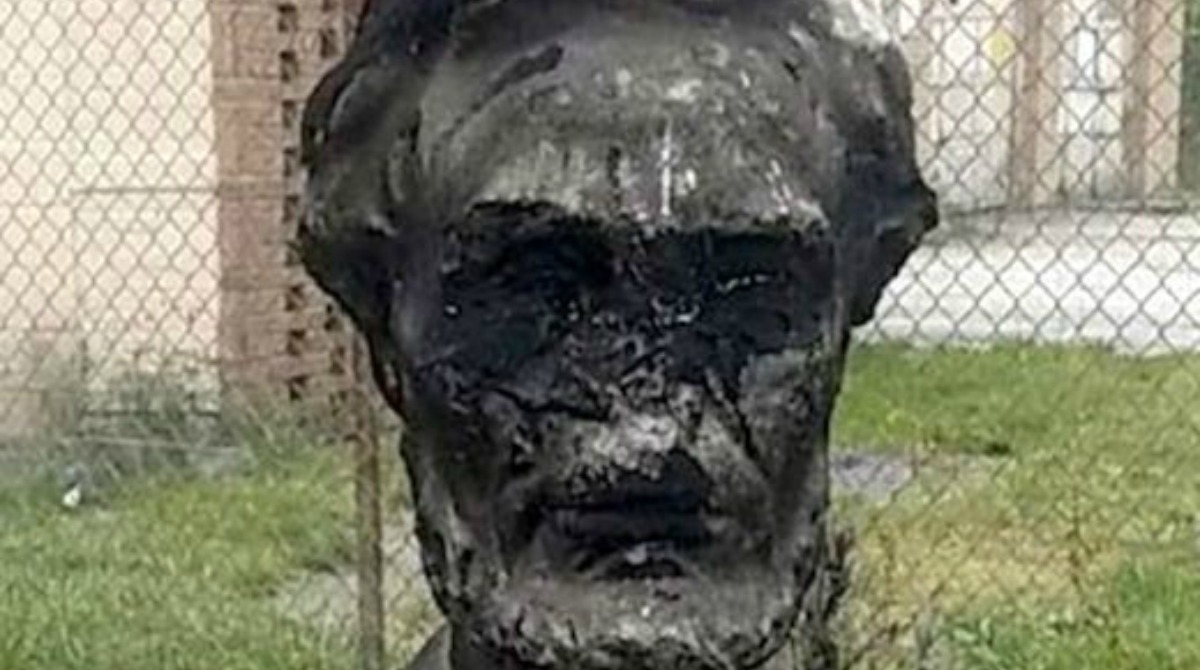 The cultural civil war that has now exploded in America is an immensely dangerous moment for the west. It is also perilous for the State of Israel and the Jewish people. Yet in both Israel and the diaspora, too many Jews just don’t get it. They are parroting instead the double-dealing and hypocritical pieties of their mortal enemies.

After Charlottesville, Israel’s President Reuven Rivlin wrote a letter expressing “support and solidarity” with the American Jewish community “at this difficult time”.

Jewish students in America run a permanent gauntlet of left-wing hate over Israel. Has Rivlin ever expressed his “support and solidarity” with the American Jewish community over antisemitism on campus?

When President Obama denied that the slaughter of Jews in the Hyper-Cacher Paris supermarket in 2015 was antisemitic, did Rivlin express his “support and solidarity” with the American Jewish community then? Hardly, since more than 70 per cent were Obama voters.

When the Democratic National Committee appointed as its deputy chairman Keith Ellison, a man with former close ties to the profoundly Jew-hating, black racist organisation Nation of Islam and who has a history of troubling remarks about Jews, did Rivlin express his support and solidarity with the Jews of America? Of course not – because the overwhelmingly Democrat-voting Jews of America are not only silent about Ellison but doubtless will themselves have nodded along with his nauseating double-speak in claiming that the Trump administration is riddled with white supremacists.

At Charlottesville, the former Ku Klux Klan leader David Duke ranted in deranged fashion about alleged Jewish power over the media and banking system and about the ”Zionist ethno-state of Israel”. But this vile outpouring is indistinguishable from the antisemitic tropes spewed out by “antifa” groups, of the kind that clashed at Charlottesville, and beyond them the left in general and beyond then too; indeed the trope of Jewish power controlling the world was institutionalised by Mearsheimer and Walt in their book The Israel Lobby, and yet they remain esteemed and even lionised in academia.

In a startling and all-too telling coda to the departure from the White House of Trump’s now ex-chief strategist Steve Bannon, the left-wing HuffPost published a picture of Bannon under the headline “Goy, bye!”

“Goy” is a Hebrew word meaning nation; colloquially, however, it is associated with a contemptuous attitude towards gentiles – and in a further linguistic twist has now been adopted by neo-Nazis to heap further hatred upon Jews.

The implication of the HuffPost headline, therefore, was that the Christian Bannon had been removed by a Jewish cabal. Although HuffPost replaced this headline after eyebrows shot up across social media Jon Cooper, an Obama campaign staffer and chairman of the Democratic Coalition, enthusiastically retweeted it. So it would seem that a ripe piece of antisemitism was manufactured and disseminated by the very people who scream “white racist” at both Bannon and Trump.

There is a simplistic view that because fascism and white supremacism are evil, anyone who opposes them must be virtuous. This utterly false deduction is assiduously promoted by the left to mask its own vicious prejudices and behaviour. Too many Jews fell for this with Soviet communism in the early decades of the last century. Now they’re falling for it again.

“The very idea that in our time we see a Nazi flag – perhaps the most vicious symbol of antisemitism – paraded in the streets of the world’s greatest democracy, and Israel’s most cherished and greatest ally, is almost beyond belief,” said Israel’s President Rivlin.

Well yes, it was indeed dreadful and sickening to see it. And one has to wonder why the Charlottesville authorities apparently allowed the neo-Nazis to parade near the town’s synagogue and shout anti-Jewish insults; not to mention the fact that the police appear to have done nothing to route the two sets of protesters away from each other. But isn’t the way in which antisemitism has become mainstream on the left and is nodded along without protest by respectable opinion the thing that’s really beyond belief?

Aren’t the repeated mass demonstrations, uniting on the streets Islamo-fascists and the left marching behind slogans calling for Israel’s destruction and death to Jews, the thing that’s really beyond belief?

Black Lives Matter, a core antifa group which was at Charlottesville, is said by Alan Dershowitz to have “declared war against the nation state of the Jewish people”. Isn’t the support for BLM by so many American Jewish liberals the thing that’s really beyond belief?

Neo-Nazism has become the trigger for a kind of Jewish blindfold. Such Jews cannot see that the greater danger today comes not from a few thousand Nazi wannabes without political power but from the massed ranks of the left. This danger is far greater because left-wing antisemitism is being given a free pass by those in positions of cultural power and who vilify and smear any who call them out.

As I wrote here, Trump’s initial remarks after Charlottesville were lamentably vague. He said:

However inadequate his response, however, it has been distorted to suggest that he refused to criticise white supremacists at all, or even that he supports them. It is also said that he drew an equivalence between the neo-Nazis and the antifa. That’s also untrue. He said merely there was violence and bad people on both sides. Indeed, the antifa arrived at Charlottesville equipped for violence with baseball bats and sticks.

Those who point this out have found themselves the butt of claims that they would have similarly condemned those resisting fascist marches in the 1930s. This is not just offensive but morally obtuse. In the 1930s, fascists posed an all-too real threat in Europe. Today’s neo-Nazis, by contrast, are a rag-tag bunch of thugs who are not in any position of power (although unforgivably they are being bigged-up by the left who are inflating their importance almost daily; who previously would even have heard of white supremacist Richard Spencer, or relayed every word David Duke uttered as if he was someone to be taken at all seriously?)

Moreover, would those who imply that violence against fascists is justified say violence against an Islamist demonstration would be justified? On the contrary – these people start screaming Islamophobia and racism at anyone who dares utter any criticism of Muslims, let alone take any action against them.

Trump’s real crime was not to defend white supremacists, which clearly he did not do, but to utter the inconvenient truth that elements on the left are also motivated by a violent lust for power.

The antifa have a history of violence, and not just against neo-Nazis. They deem any conservative to be a fascist and therefore deserving of intimidation and suppression. They are also viciously anti-Zionist which serves as flimsy cover for hatred of Jews.

Powerline has noted: “As one prominent antifa thug said of those on the other side of the political spectrum, ‘their existence itself is violent and dangerous, so I don’t think using force or violence to oppose them is unethical.’”

Noting that the casus belli at Charlottesville was the proposal to remove a confederate statue, Trump wondered where all this would end.

“This week it’s Robert E. Lee, I noticed that Stonewall Jackson is coming down. I wonder, is it George Washington next week, and is it Thomas Jefferson the week after? You have to ask yourself, where does it stop?”

Well, that’s already developed just as he predicted. A frenzy has taken hold as confederate statuses and monuments are being defaced or torn down across America.

Bishop James E. Dukes of Chicago’s Liberation Christian Centre called on Mayor Rahm Emanuel to rename Washington Park and remove a statue of the first U.S. president over his ties to slavery.

A confederate statue was toppled in Durham, north Carolina, with chants of “We, we are the revolution!” and “No Trump, no KKK, no fascist USA!” Then the vandals took turns kicking it and spitting on it.

Georgian Democratic gubernatorial candidate Stacey Abrams has called for the destruction of the Stone Mountain carving of three Confederate leaders.

In this madness, Trump is even being blamed for unleashing the left as well as the far right.

Chicago Alderman Ray Lopez blamed Trump for the vandals who torched a bust of Abraham Lincoln.

“When you have a president who, from his point of moral authority as leader of the free world, condones the actions of white supremacists, neo-Nazis, people who believe in a segregated society – when he refuses to refute what their actions are – you embolden people to continue,” said Lopez.

So by allegedly emboldening neo-Nazis Trump has emboldened… their leftwing opponents. How crazy is this thinking??

What has erupted in America is a madness. It’s not just against Trump. It’s against American history and identity, and it’s a repudiation of reason itself. For sure, white supremacists and their ilk are evil; but they don’t threaten the very fabric of America and the west. The violent, power-crazed, nihilistic, totalitarian left do just that.

This madness explains the related derangement of anti-Zionism and Jew-baiting on the left. Too many Jews can’t put this in its necessary context to see what’s happening for the danger that it is. Instead, they are transfixed by a few thousand aggressive far-right misfits. If even Jews cannot recognise the true threat to society, what hope is there for anyone else?