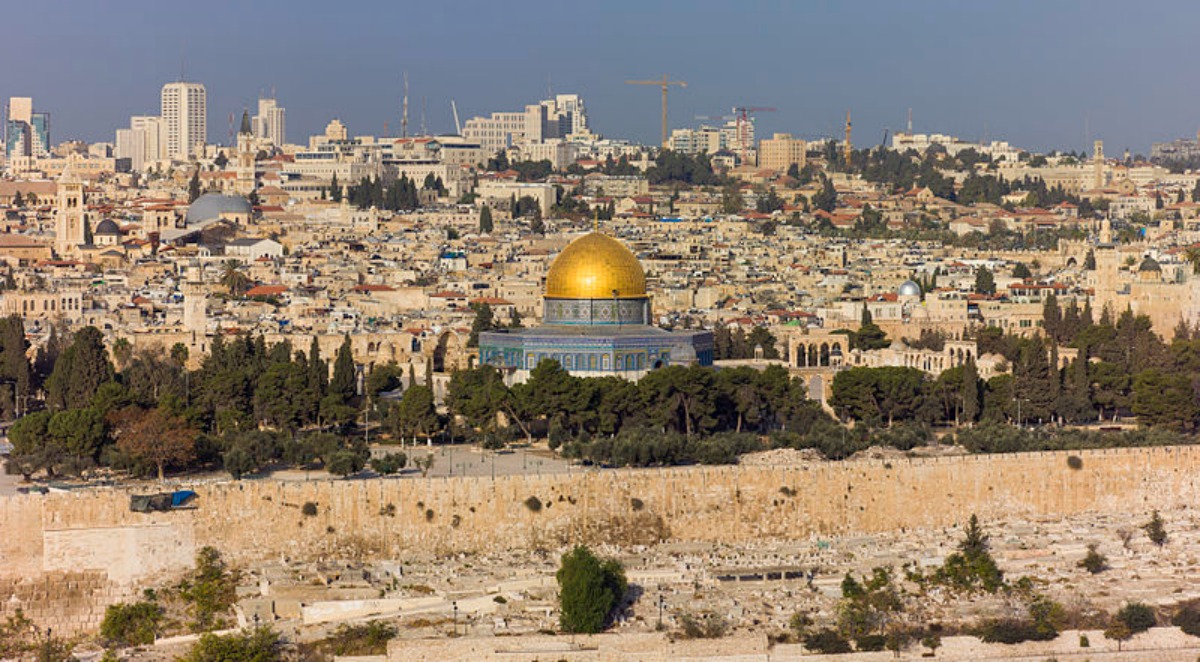 In the wake of the recent violence over Temple Mount, a reader wrote to tell me something I hadn’t realised.

This raised a question in my mind. As we all know, the Arab and Muslim world incites murderous violence against Israel by claiming (entirely falsely) that al Aqsa is “in danger” from the Israelis. They use the term al Aqsa as a synonym for the whole area of Temple Mount and not just the mosque of that name.

But since the Dome of the Rock is a religious shrine, a site of private prayer and pilgrimage; and since it was deliberately built on top of the Jewish Temple in order to bury it both literally and figuratively; and since the Dome of the Rock is a more magnificent edifice and older than al Aqsa, why is it barely mentioned other than in passing? Why is al Aqsa classified as the third holiest Islamic place after Mecca and Medina? Why is it only al Aqsa for which the Arab and Muslim world goes to war against the Jews?

To shed some light on this, I consulted two excellent and authoritative pieces of work: an article in Middle East Quarterly by Daniel Pipes entitled The Muslim Claim to Jerusalem, and a book-length paper by Nadav Shragai for the Jerusalem Centre for Public Affairs entitled The “Al Aksa is in Danger” Libel: The History of a Lie.

These two essays contain much riveting detail showing how the claim that Temple Mount is sacred to Islam is a lie built on a series of lies, of which the claim that “al Aqsa is in danger” is the apogee – and which have all been used to incite war against the Jewish people and write them out of their own history.

Both the Dome of the Rock and al Aqsa, which had been neglected for decades, were renovated in the 1920s by the Islamic extremist and Hitler ally, the Grand Mufti of Jersualem Haj-Amin al Husseini, for whom the project was a means of boosting his power and authority.

It was al Husseini who first incited the Muslims with the cry that al Aqsa was “in danger” from the Jews who he falsely claimed were plotting to build the Temple there. In the resulting pogroms 133 Jews, mostly in Safed and Hebron, were butchered and 339 were injured.

Both Pipes and Shragai show, moreover, that over the centuries both Temple Mount and Jerusalem itself were regarded with indifference by the Islamic world until they took on political significance because other cultures laid claim to them. Then and only then were they elevated to the status of holy shrines. And that was done on the basis of lies.

The claim that al Aqsa was a sacred Islamic shrine was a fiction created to serve temporal political ends. In order to de-Judaise Temple Mount and Jerusalem – the most sacred places in Judaism – the Islamic world changed the age and status of al Aqsa.

Shragai writes: “The process of Islamisation and Arabisation stemmed from the need to claim an Arab and Islamic historical right to the sacred land, before the Israelites were there – the ancient Jews, and the Christians. The new Muslim narrative determined, for example, that the al Aksa mosque was not built around 1300 years ago – which is what modern research finds – but rather by the first man, forty years after the mosque in Mecca was built.”

However, the fact remains that the Dome of the Rock was built before al Aqsa, and on the site of the Temple itself. So why was al Aqsa given special significance?

As Pipes writes, the creation of the Dome of the Rock resulted from a revolt against the Damascus-based Umayyad dynasty in the seventh and eighth centuries by a dissident leader in Arabia.To fight him, the Umayyad rulers chose to exalt and glorify Jerusalem in order to undermine the status of Mecca. Accordingly the Umayyad ruler, Mu‘awiya, went to great lengths to build religious edifices, a palace and roads in the city.

The Umayyads understood that ascribing an Islamic aura to their stronghold would cement their regime in power. “Toward this end (as well as to assert Islam’s presence in its competition with Christianity), the Umayyad caliph built Islam’s first grand structure, the Dome of the Rock, right on the spot of the Jewish Temple, in 688-91. This remarkable building is not just the first monumental sacred building of Islam but also the only one that still stands today in roughly its original form.”

The Dome of the Rock was therefore an act of political supersessionism: built on top of the Jewish Temple in order to assert the dominance of the Umayyads over the city. But they realised that an Islamic aura wasn’t enough. They needed to harness the power of the sacred itself.

In the Qur’an there is a mention of Mohammed’s journey to “the furthest mosque”, a reference understood by some early Muslims as metaphorical or a place in heaven. It was never held to be in Jerusalem or on Temple Mount. Indeed, there is no mention of Jerusalem in the Qur’an.

Cynically – and brilliantly – seizing upon this reference, the Umayyads built a second sacred Islamic edifice in Jerusalem, also on Temple Mount, and called this one the “Furthest Mosque”. This was al Aqsa.

Pipes observes: “With this, the Umayyads retroactively gave the city a role in Muhammad’s life. This association of Jerusalem with al-masjid al-aqsa fit into a wider Muslim tendency to identify place names found in the Qur’an: wherever the Qur’an mentions a name of an event, stories were invented to give the impression that somehow, somewhere, someone, knew what they were about.

“Despite all logic (how can a mosque built nearly a century after the Qur’an was received establish what the Qur’an meant?), building an actual al Aqsa Mosque, the Palestinian historian A. L. Tibawi writes, ‘gave reality to the figurative name used in the Koran.’It also had the hugely important effect of inserting Jerusalem post hoc into the Qur’an and making it more central to Islam.

“Also, other changes resulted. Several Qur’anic passages were re-interpreted to refer to this city. Jerusalem came to be seen as the site of the Last Judgment. The Umayyads cast aside the non-religious Roman name for the city, Aelia Capitolina (in Arabic, Iliya) and replaced it with Jewish-style names, either Al Quds (The Holy) or Bayt al Maqdis (The Temple).”

It’s clear from this that, while the Dome of the Rock is an Islamic shrine it was a political construction built to make a statement of conquest and domination – yet that was not enough. For the real power of that conquest resided in the religion of Islam. So al Aqss was built with the spurious claim that it represented a place mentioned the Qur’an – which Muslim scholars never agreed even existed as an actual place at all but which was said nevertheless to be, by a remarkable coincidence, on the very same site as the Dome of the Rock, that statement of temporal power and conquest.

That is why the cry that the Muslims are under attack, the incitement against the Jews, the claim that they intend to rob the Islamic world of its holy of holies – this is always about al Aqsa. It shows that this battle cry actually has nothing to do with preserving sacred Islamic shrines. It omits the Dome of the Rock because the intention today behind that cry remains unchanged from the seventh and eighth centuries. This is to use a spurious claim of religious sanctity to render untouchable the war to destroy the Jewish claim to Temple Mount and to Jerusalem – the only legitimate claim – which is being waged today, as it has been over the centuries, through violence, incitement and lies.

Update: it has been pointed out that the Dome of the Rock was not built as a mosque but as a religious shrine. I have amended the text here accordingly.