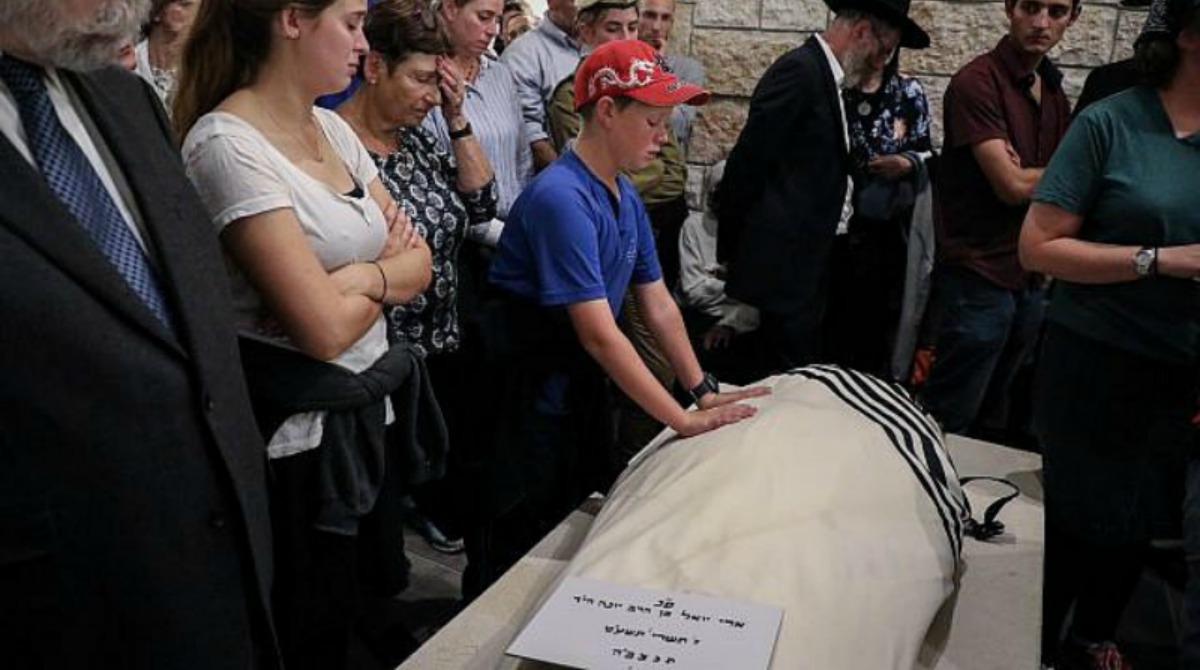 On Sunday, a man who devoted his existence to fighting hatred and genocidal mass murder lost his life to the very evil that he fought.

Ari Fuld, a 45 year old father of four from the Israeli town of Efrat, was stabbed in the back outside a supermarket by an Arab teenager. Despite his wounds, Fuld chased and shot his attacker, thus preventing any more casualties. He was rushed to hospital where he was pronounced dead.

This murder has hit Israelis hard. Ari Fuld was but the latest in the unending procession of Jews who have been murdered in the Arab war of extermination against Israel. Each of these murders is an unspeakable tragedy.

But the murder of Ari Fuld has caused particular grief because he was a fighter for his people – a selfless, tenacious Israel patriot who worked tirelessly and put his life on the line to stand up for the rights of the Jews in their historic land and to protect them from harm. And now he is fallen, a victim himself of that very harm.

Fuld worked at Standing Together, an NGO that supports Israeli soldiers. He was committed to fighting the lies and demonisation about Israel that pour daily out of the western media.

The Times of Israel reports: “He was mourned in an outpouring of social media tributes throughout the day, with friends and ideological opponents alike eulogizing the Israel advocate and former karate instructor as an unflinching champion of the Jewish state and fearless fighter to the end”.

Ari Fuld’s work, in common with that of many other activists, was necessitated by the baseless hatred and ceaseless attacks directed against Israel and the Jewish people from the Arab world – sanitised, supported and incentivised by the indifference or active incitement by those in the west who hate Israel and want it gone.

The kind of people who claim that Israelis living in the disputed territories, such as in the town of Efrat, are “illegal settlers” who have colonised Palestinian land – a lie, since there never was any “Palestinian” land, while law, truth and history entitle the Jews alone to live there. The kind of people who, shamefully and disgustingly, shrug aside the murder of Ari Fuld simply because he lived in Efrat.

His murderer was Khalil Jabarin, a 17 year-old Arab boy. He was but the latest in a string of teenage Arab terrorists who are attacking Israeli Jews. The reason isn’t hard to find: as Palestinian Media Watch observes, they are being incited to hatred and murder of Jews by the Palestinian Authority education system and mass media which tell them that “all Israelis deserve to be killed and that dying while committing a terror attack is ‘the path to excellence and greatness… the great victory’.”

The Arab writer Bassam Tawil links Jabarin’s attack directly to incitement by PA president Mahmoud Abbas who he says has Ari Fuld’s blood on his hands.

“In a speech before the PLO Executive Committee in Ramallah on September 15, Palestinian Authority (PA) President Mahmoud Abbas repeated the old libel that Israel was planning to establish special Jewish prayer zones inside the Al-Aqsa Mosque.

“…Abbas’s allegation was quickly picked up by several media outlets in the Arab world, the West Bank and Gaza Strip…According to Palestinian terrorist groups, Jabarin decided to murder a Jew in response to Israeli “crimes” against the al Aqsa Mosque in particular and other Islamic holy sites. In other words, the terrorist was influenced by Abbas’s incitement, and this is why he decided to set out on his deadly mission.”

The Palestinian Authority is funded by Britain and other western governments. These governments are therefore indirectly responsible for the incitement to hatred and murder of Jews which is poisoning Arab children’s minds. If Abbas has the blood of murdered Israelis on his hands, Britain and the west have helped dip them in it.

This evening sees the beginning of Yom Kippur when Jews fast to repent and seek forgiveness for their sins. It is a day when, as we pray to be sealed in the book of life, we recall those who were martyred on account of their defence of Judaism. We do so in order to reaffirm, in the face of those who rise in every generation against the Jewish people, the faith that has never wavered despite the savage attempts to destroy us.

To this list of those who were brutally murdered for no other reason than the hatred of Jews by a barbaric world, we will add the name of Ari Fuld. May his memory be for a blessing.