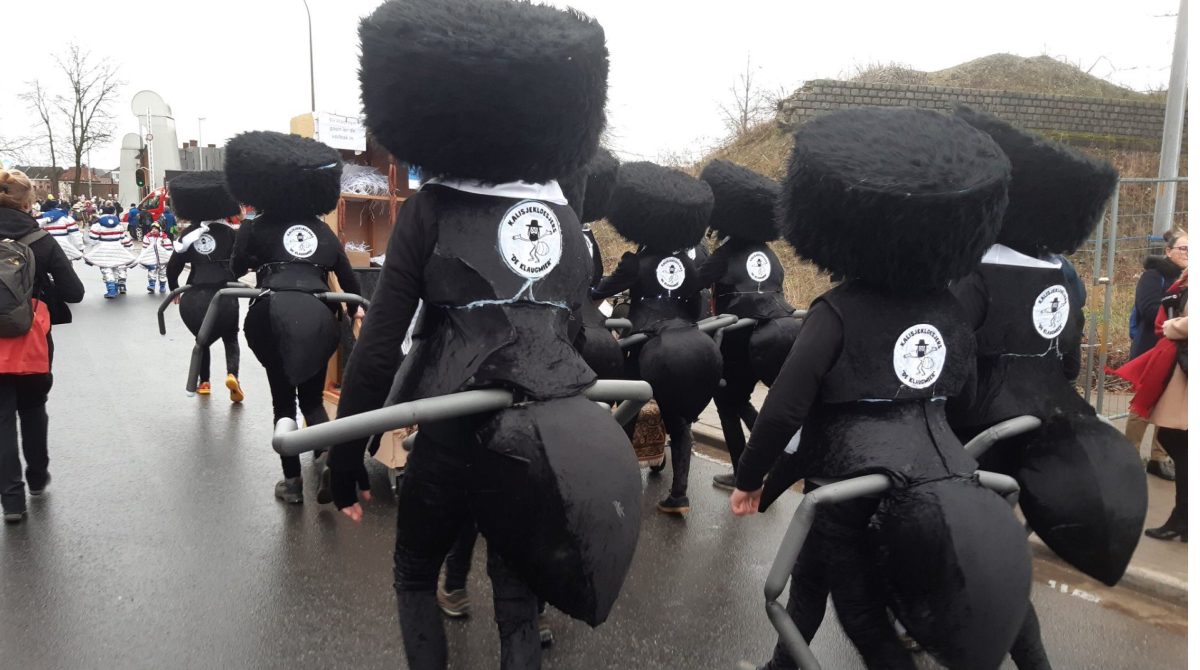 Others were dressed in Nazi uniforms, among other vicious Jewish caricatures, libels and insults.

The mayor of Aalst defended the carnival on the basis that it mocked Christians and Asians, too. He thus showed no understanding of the difference between vulgar mockery and the murderously dehumanizing, historical phenomenon of antisemitism.

This was followed by a carnival parade in the Spanish village of Campo de Criptana. Supposedly intended to commemorate the Holocaust, it featured dancing Nazis, concentration-camp prisoners in sequined tights and Israeli flags, and a “gas chamber” float with a giant Hebrew menorah between two chimneys.

On Monday, the European Jewish Association revealed the results of a survey of 16,000 Europeans from 16 countries. One-fifth of them believed that a secret network of Jews influences global political and economic affairs. The same number agreed that “Jews exploit Holocaust victimhood for their own needs,” and one-quarter agreed that Israel’s policies make them understand why some people hate Jews.

In the United States, more than 50 Jewish community centers in 23 states have received emailed bomb threats within the past week.

There have been repeated attacks on ultra-Orthodox Jews in Brooklyn. There have been synagogue murders in Pittsburgh and Poway, and widespread bullying of Jewish students on college campuses. Members of “the Squad” of freshman congresswomen have made venomously anti-Israel or anti-Jewish statements.

Bernie Sanders, who is currently the frontrunner to secure the Democratic presidential nomination, is purposely not attending next month’s AIPAC conference because he claims it provides a platform for leaders expressing “bigotry” and opposition to “basic Palestinian rights.”

In Britain, antisemitic incidents rose last year to an unprecedented high, marking the fourth successive year of record-breaking figures. In France, 12 Jews have been murdered since 2003 just because they were Jews, while antisemitic attacks soared by more than 75 percent last year and the year before. In Germany, antisemitic incidents are similarly rising with a murderous attack last Yom Kippur on the synagogue in Halle.

While anti-Jewish attacks are coming from the far-right, the left and the Muslim community, the greatest threat comes from the progressive side of politics.

This is because its world-view overwhelmingly dominates western cultural and political institutions; it harbors profound anti-Jewish views within its own ranks; and its cultural reach means that its own anti-Jewish incitement legitimizes and encourages far-right antisemitic attitudes that were once treated as beyond the pale.

And this is all inextricably tied up with hatred of Israel, and the entirely false but widespread belief that the Jews have displaced the indigenous people of the land and behave illegally and with wanton cruelty towards the Palestinian remnant.

From these lies and libels flows the surreal irrationality of the anti-Israel discourse that has so shockingly become the signature cause of the western progressive.

The obvious reasons for this include the takeover of progressivism by Marxism, the collapse of education into anti-western propaganda, and the rise of identity politics and intersectionality. This has created an ignorant and brainwashed cohort of young people who have provided the groundswell for Sanders or Britain’s (now defeated) Jeremy Corbyn.

This week, the Jerusalem Centre for Public Affairs published a book of essays called Israelophobia and the West: the Hijacking of Civil Discourse on Israel and How to Rescue It. The book provides a thoughtful analysis of the nexus between antisemitism and anti-Zionism, where legitimate criticism of Israel stops and demonization starts, and the fundamental challenge to Israel from the left.

All this, though, has already been exhaustively discussed. Moreover, much of it merely produces the same old agonized discussion about how more effectively to challenge the lies and delegitimization. It thus assumes that the lies can and should be countered by a better application of reason.

This, though, misses the critical point: that both anti-Zionism and antisemitism constitute an irrational belief, akin to a cult, and are therefore impervious to facts and argument.

This is understood by French sociology professor Shmuel Trigano. In the most astute essay in the JCPA’s book, he correctly says we are “entering a new age of Jew-hatred,” which cannot be argued with but must instead be fought.

The onslaught against Israel and Zionism, he points out, is part of the left’s broader reconfiguration of the west. Anti-Zionism, he says, is the creature of post-modernism and its satellite orthodoxies: post-colonialism, multiculturalism and gender doctrine, all of which are involved in “deconstructing” western society.

As he writes, criminalizing the identity of the Jews as a people in the State of Israel is part of the European postmodernists’ war against their own cultures and nation-states.

But even that still doesn’t explain this eruption of obsessive, primitive Jew-hatred.

For it’s not just that anti-Zionism is the contemporary mutation of antisemitism. The old, un-mutated antisemitism is still there: the open hatred of Jews as Jews. The question is why this has been allowed to roar once again into a cultural conflagration.

Contrary to what Harvard Law School professor emeritus Alan Dershowitz said in a discussion about the JCPA book on Wednesday evening, the cause is not the polarization into political extremism on both sides.

This eruption hasn’t been created by Bernie Sanders or Jeremy Corbyn; nor, as some believe, by the populism of Donald Trump or Hungary’s nationalist prime minister, Victor Orbán.

Populism is not in itself an extremist movement (although some bits undoubtedly are). It is rather a response to the extremism that has overtaken the entire progressive movement, and which represents the idea of the west as intrinsically evil and sinful.

Sanders and Corbyn, who are both undoubtedly extreme, are not the cause of the phenomenon, but the product of a broad cultural shift. When Bernie Sanders called Israeli Prime Minister Benjamin Netanyahu “a reactionary racist” in Tuesday’s Democratic presidential candidates’ debate, the audience broke into applause.

The real cause of the descent into anti-Jewish and anti-Zionist hatred is secular liberalism, and the cultural fissure that has opened up along fault lines stretching back to the 18th-century Enlightenment.

This proclaimed the death of God and the enthronement instead of the autonomous individual freed from biblical moral codes. This led to the destruction of hierarchies of values without which there can be no morality, the replacement of duty by man-made and highly contingent human rights, and the collapse of truth and reason.

The result is the moral and philosophical carnage we see all around us. There’s the psycho-pathological unmooring of individuals caused by the undermining of the family. There’s the abolition of objectivity in the universities by moral and cultural relativism.

And there’s the apocalyptic environmental movement, which mirrors the belief by medieval, Jew-massacring Christians that fallen humanity must be punished for its sins to bring about the perfection of the world — and which has sanctified as its prophet a psychologically damaged child.

Better advocacy for Israel, necessary as that is, will not address this anti-Jewish derangement. That’s because what’s driving it is the repudiation of the Jewish precepts at the heart of the Christian West. And the problem — and tragedy — for the Jewish people is that so many of those subscribing to this liberal onslaught are themselves Jews.