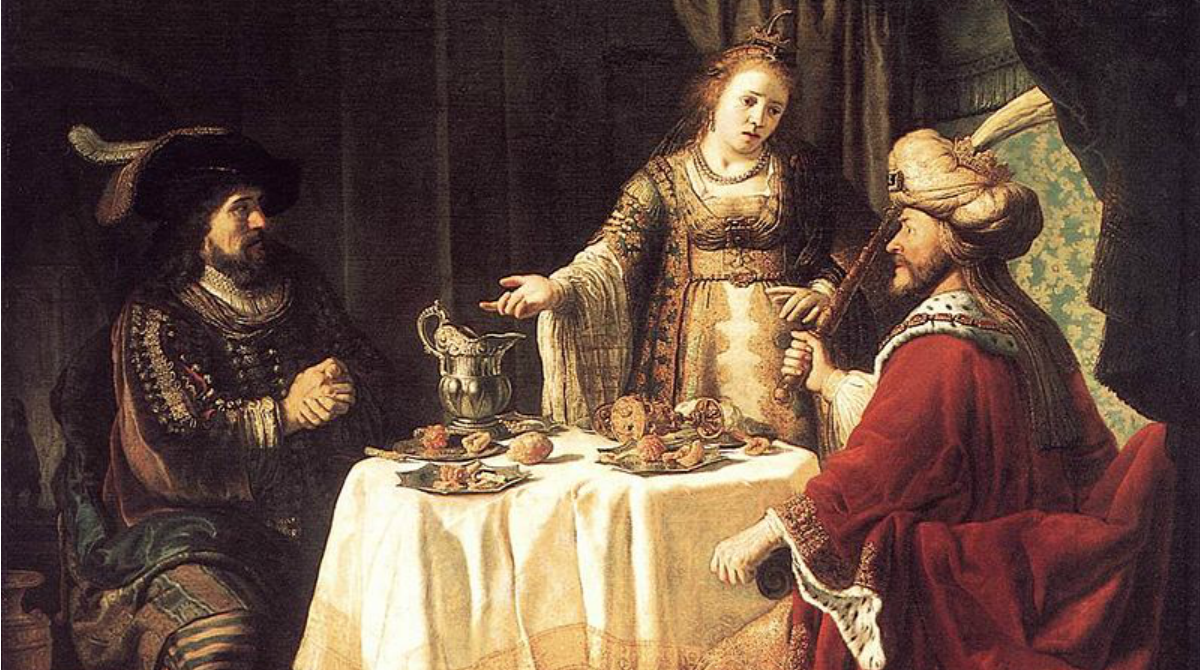 Today and yesterday (depending on where you are in the world) observant Jews have been celebrating the festival of Purim by reading the megillah of Esther. This is the story of the Persian king Ahasuerus, commonly identified as Xerxes I, who went along with the plan hatched by his vizier Haman to exterminate the Jews. Ahasuerus was then persuaded out of this by his Jewish queen Esther, who was urged on by her brother Mordecai, and hanged Haman instead.

Witty folk have been comparing Ahasuerus to Donald Trump. This is because Ahasuerus was a man whose vulgarity was exceeded only by his vast wealth, who displayed a primitive attitude to women and who was a clownish figure whose attitudes and policies changed according to the last person who spoke to him.

The story lends itself to other contemporary allusions. President Trump’s close advisers, his son-in law Jared Kushner and his daughter Ivanka, might be compared to Mordecai and Esther. These were the Jews in the Purim story who saved their people from annihilation through their combination of heroic courage, Mordecai’s strategic insight and Esther’s skill in using her favoured place at court as Ahasuerus’s beloved queen to open the king’s eyes not just to the danger facing the Jews but the threat posed to himself.

As for Haman, the evil courtier who wanted to wipe out the Jews and who was the embodiment of the existential Agagite enemy who observant Jews believe arises in every generation to try to exterminate them, the same wits have nominated as his present-day successor Britain’s Labour party leader Jeremy Corbyn and the recently departed American President Barack Obama.

A ho-ho moment or grossly unfair, depending on your point of view. But there is a real present-day Haman, an actual regime that intends to exterminate the Jews and is busily devising ever more fiendish ways to do so, and that is modern-day Persia or the Islamic Republic of Iran.

Israel’s Prime Minster Benjamin Netanyahu told a group of Israeli schoolchildren celebrating Purim that the Persians still wanted to kill the Jews but, just as under Ahasuerus, it wouldn’t work this time either. Cue faux-outrage from Iran’s foreign minister Javad Zarif, who tweeted: “To sell bigoted lies against a nation which has saved Jews 3 times, Netanyahu resorting to fake history & falsifying Torah. Force of habit.”

In an attachment Zarif wrote further: “The Book of Esther tells of how Xerxes I saved Jews from a plot hatched by Haman the Agagite, which is marked on this very day; again during the time of Cyrus the Great, an Iranian king saved the Jews — this time from captivity in Babylon; and during the Second World War, when Jews were being slaughtered in Europe, Iran gladly took them in”.

Netanyahu was correct and the protestations by Jarif are, in several respects, jaw-dropping. Today’s Agagite equivalent is the Iranian Supreme Leader, Ayatollah Khamenei and his predecessors in the Iranian regime. Hardly a month passes without members of that regime declaring their intention to wipe out the State of Israel. Its missiles are inscribed with reference to their intention to slaughter the Jews. They fund, train and deploy terrorists across the globe to slaughter Jewish people along with waging associated proxy wars against western interests.

The Iranian regime is hell-bent upon genocide. The comparison with Haman if anything understates the gravity of this current threat.

To be sure, the Persians were not the Jews’ historic enemies. Modern Iranians are in general civilised, cultured people benignly disposed towards Jews and others in the world. They are themselves being oppressed and terrorised by the fanatical Islamic regime which has ruled Iran so cruelly since 1979.

But Jarif’s outburst contains a remarkable admission. As an amazed Professor Eugene Kontorovich noted in another tweet, Jarif appears to have acknowledged the Nazi Holocaust of the Jews. Considering that his regime constantly pumps out the most deranged expressions of Holocaust denial, one is tempted to conclude that the lesson of Purim about turning the tables on an evil intention is pertinent even today.

No less pertinent is the enduring lesson of what Mordecai says to Esther in order to encourage her to plead for the Jews before the king. When Esther demurs on the grounds that the king will kill her if she approaches him, Mordecai says: “Do not think in your heart that you will escape in the king’s house any more than all the other Jews. For if you remain silent at all at this time, relief and deliverance will come to the Jews from elsewhere; but you and your father’s house will perish; and who knows whether you haven’t come to royal estate for such a time as this?”

Today the world is in a state of denial about the threat from the Iranian regime. Too many, including too many Jews, prefer to take the path of least resistance, to pretend that the threat isn’t as great as it really is, that the Iranians are all talk but don’t really mean it when they threaten the Jews with genocide.

It is surely not President Trump who most resembles Ahasuerus but the western world in general, which is weak and venal and ignorant and all too prepared to believe the falsehoods of its enemies while disregarding the real threats, not only to its friends but to itself. Who is the present-day Esther or Mordecai who will open its eyes to reality?