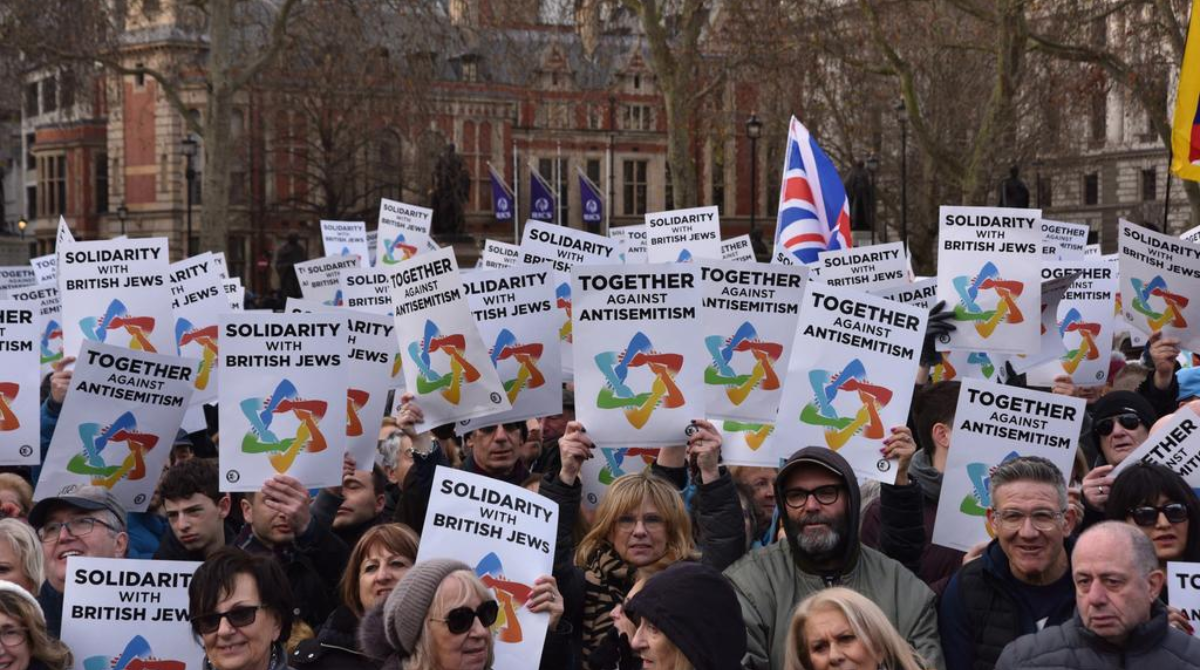 At last Sunday’s rally against antisemitism in Westminster, more than 3,000 people listened to a range of speakers denounce anti-Jewish bigotry.

Beyond that rally, however, reaction among the general public to the hatred in the Labour party directed at Israel and the Jewish people does not seem to reflect its eye-watering scale and viciousness.

Leaked evidence collected by the Jewish Labour Movement exposed a virtual tsunami of crazed venom, with statements that Jews were “subhuman” and should “be grateful we don’t make them eat bacon for breakfast every day”, that they were connected to Isis or 9/11, or they were traitors and “bent-nosed manipulative liars”.

Despite all this, there’s still a failure to grasp the full dimensions of this horror. For there are two issues over which widespread moral confusion is hampering proper acknowledgment of this onslaught against the Jews.

The first is support for the Palestinian cause and the related belief that, while antisemitism is a loathsome prejudice against Jews as people, anti-Zionism and Israel-bashing are legitimate attacks on a political project. This distinction is bogus.

Anti-Zionism is the modern mutation of antisemitism with which it shares the same, unique characteristics of deranged and obsessive falsehoods, demonic conspiracy theory and double standards. It is furthermore an attack on Judaism itself, in which the land of Israel is an inseparable element.

The Palestinians constantly spew out medieval and Nazi-themed hatred of Jews, presenting them as the source of all evil in the world. They claim that the Jews were behind 9/11, that they are current-day Nazis and that they control US foreign policy and the world’s finances and media.

So why should anyone be surprised when Labour party members who make the Palestinian cause their litmus test of conscience regurgitate the same deranged claims?

This week, a startling further linkage was revealed. The Jerusalem Post reported that Hamas officials in Gaza and London had been working in support of Labour’s leader Jeremy Corbyn.

According to the Tazpit Press Service, the “We Support Jeremy Corbyn” Facebook page was managed for more than two years by Walid Abu Rouk, a resident of Khan Yunis, after Labour party members declared him “our man in Gaza”.

Yet the revelation that a genocidal terrorist group abroad had been interfering in British politics was all but ignored.

That’s because Palestinian misdeeds, including Jew-hatred, can’t be acknowledged. Nor can the Jew-hatred coursing through Muslim society in general.

And that’s because the Islamic world is given a free pass on the grounds that it is the historic victim of the west. So any such criticism is silenced by the claim it is “Islamophobic”.

Shockingly, some Jewish leaders have gone along with this travesty, even equating “Islamophobia” with antisemitism.

But the taunt of Islamophobia is used to silence any criticism of the Islamic world, including Islamic extremism. This is the second issue which ties people up in knots over antisemitism.

“Islamophobia” was invented by the Muslim Brotherhood to mimic antisemitism, the concept which these Islamists falsely believe immunises Jews from criticism — itself an antisemitic belief.

So “Islamophobia” appropriates to itself the unique attribute of antisemitism — that it is deranged — in order falsely to label any adverse comment about the Islamic world as a form of mental disorder.

The concept of “Islamophobia” is thus profoundly anti-Jew. To equate it with the dehumanising, insane and essentially murderous outpourings of Jew-hatred is obscene.

Those who call out Islamic extremism or Muslim/ Jew-hatred for what it is find themselves defamed as “Islamophobes” in order to silence them. There have recently been events at which such smear campaigns have been mounted against proposed speakers whose record in fighting Islamic extremism and defending Israel and the Jewish people is little short of heroic.

Yet in response to such false allegations, other participants have not treated these with the contempt they deserve. Instead, they have threatened to withdraw and wreck the event if the victim of these smears is allowed to take part.

There’s something even worse than the cultural thuggery behind such smears, That’s the craven response of those who thus tacitly endorse the silencing of people whose sole offence is to tell the truth.

“Islamophobia” is not equivalent to antisemitism. It facilitates it.