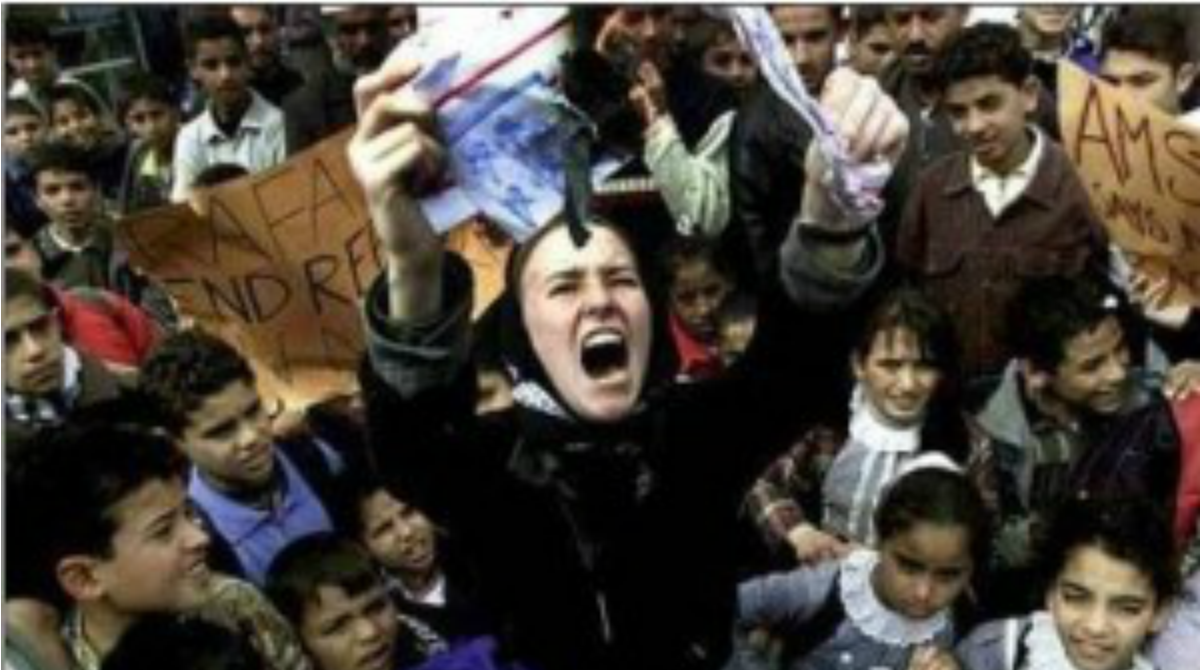 London’s Young Vic theatre is staging a revival of the hate-inciting, Israel-phobic agit-prop called My Name is Rachel Corrie which was first put on in 2005. With exquisitely horrible timing, its previews started last Friday evening which was Kol Nidrei, or the beginning of Yom Kippur which is the most holy day in the Jewish religious calendar. A protest is being staged outside the theatre every night; with enormous decency and commitment, a group of Christians leafleted the theatre during the Yom Kippur performances.

Last July Jonathan Hoffman, who is involved in the protests, wrote an excellent piece on Harry’s Place about this malevolent travesty in which he revealed the truth about Rachel Corrie, her poisonous organisation and what happened to her.

People who never knew or who have forgotten this 12 year-old story need to understand quite how vicious is this staged event and what enduring shame it brings to the Young Vic theatre. I therefore reproduce Jonathan’s blog post with permission below.

London’s Young Vic theatre is reviving ‘My Name is Rachel Corrie’. There will be 27 performances, starting with previews on Kol Nidre (29 September); press night is 4 October.  The theatre holds 70, so 1890 people will have the chance to see this play which incites hatred against Israel and therefore against its supporters, at a theatre which is supported by the taxpayer.

The Facts
Rachel Corrie was a young American (age 23). The play is extracts from her emails and diaries, selected by Alan Rickman and Katharine Viner. She was idealistic but very naïve. She volunteered for the International Solidarity Movement (ISM), a group that opposes Israel’s existence and whose members seek to prevent the Israeli army from acting against terrorists in Gaza and Judea/Samaria. The IDF’s ability to operate effectively in these areas against terrorists has been systematically and intentionally obstructed by groups of foreign volunteers for the ISM, used by the Palestinian Authority as “human shields”. By interfering with Israeli counter-terrorism operations, the ISM directly endangers the lives of Israeli civilians.

In April 2003, Israel’s Ministry of Foreign Affairs reported: “ISM members take an active part in illegal and violent actions against IDF soldiers. At times, their activity in Judea, Samaria and the Gaza Strip is under the auspices of Palestinian terrorist organisations.” In the past, ISM members have been arrested vandalising and destroying Israeli security fences and equipment. In March 2003, fugitive Islamic Jihad terrorist, Shadi Sukiya, was arrested in a house in Jenin rented by the ISM.

Rachel Corrie was one of the “internationals” planted in Rafah, a town on the Egypt/Gaza border, in March 2003. There the IDF was demolishing tunnels used by the Palestinians to bring arms and explosives into Gaza to use against targets in Israel. The area of the IDF’s operation was clearly a military area and Corrie should not have entered it.  But she did and in the course of one such Israeli attempt to knock down a structure shielding one of the tunnels (16 March 2003), Corrie stood in front of an Israeli bulldozer. She slipped on a mound of dirt and was tragically killed.

The Omissions, Lies and Demonisations

The play is full of unsubstantiated, context-free allegations about supposed Israeli brutality. Thus the IDF is alleged to have stopped the ISM retrieving a corpse; the IDF destroys wells and is engaged in a ‘constant attempt to remove you from your home’; IDF tank drivers are ‘many just aggressive, anonymously shooting into the houses as we wander away’. In an entry in her diary for 9 March 2003 headed ‘Today’s demo’ Corrie says ‘at least ten greenhouses destroyed .. Quiet area …300 people dependent on farms to live ….. 150-200 men arrested … Shot around them. Beat them. Six people in hospital.’

The two most important omissions are (i) the second intifada and (ii) the true nature of the ISM (and indeed of Corrie). The second intifada – a period of heightened militancy against Israel – began in 2000 and lasted through to 2005. Just weeks before Corrie’s March 2003 diary entries, 23 Israeli civilians were killed in Tel Aviv’s central bus station – killed by a Palestinian suicide bomber – and on 5 March 37 were killed in a suicide bombing in Haifa. So of course Israel was engaged in operations in Gaza to stop explosives being used against its citizens. The fallacy that the ISM is a ‘peace’ organisation has already been exposed. Leaders of the ISM movement have repeatedly made statements in support of violence and it was they who were most culpable in Corrie’s death – NOT the Israeli bulldozer driver.

Lee Kaplan started an organisation called Stop the ISM after he attended undercover some ISM national conferences. Kaplan says “In doing so, I and many volunteers all began exposing the ISM for what it really is: a terrorist protection movement bent on first the destruction of Israel and then the United States and a propaganda arm of terrorist groups on US college campuses. To date our activities have managed to get over 200 ISM troublemakers deported from the West Bank, and just recently the main money laundering arm of the ISM came under scrutiny of the IRS so they had to stop collecting donations tax free that were costing the US government a fortune in lost tax revenue and ultimately went to organisations associated with Hamas.”

There is no mention in the play that the ISM met with the British suicide bombers Omar Khan Sharif and Asif Muhammad Hanif who, a few days later (30 April 2003), blew up Mike’s Place, a Tel Aviv pub, killing three and injuring dozens (see this piece by Tom Gross).  Or of the fact that in its mission statement the ISM said ‘armed struggle’ is a Palestinian ‘right’. Nor of the statement of the ISM ‘media co-ordinator’, Flo Rosovski, that “Israel is an illegal entity that should not exist!” Indeed Rachel Corrie did not think that the ‘terrorist’ word was appropriate for Palestinians. She suggests to her mother that she should update the local paper with her news and says ‘I think it’s smart that you’re wary of using the word ‘terrorism’ … you could be perpetuating the idea that the Israel-Palestinian conflict is a balanced conflict.’ Try telling that to the widow and children of Elad Salomon, murdered in Halamish while having Shabbat dinner last week, along with his father and sister.

As for Corrie herself, inconveniently for those who have sought to portray her as a peaceful protester, photos of her burning a mock American flag and stirring up crowds in Gaza at a pro-Hamas rally were published by the Associated Press and on Yahoo News on 15 February 2003, a month before she died. Yet just three weeks earlier (on 25 January – the day she arrived in Israel) she wrote “I’m really new to talking about Israel-Palestine, so I don’t always know the political implications of my words”.

Then there is yet more demonisation of Israel.  Maybe Rickman and Viner failed to realise the inconsistency – but in a message to her mother, Corrie speaks of the ‘legitimate armed struggle’ of the Palestinians, but then in the same message praises their ‘Gandhian non-violent resistance’ …. Whoops! And she completely misinterprets the Fourth Geneva Convention.  Israel has never carried out ‘collective punishment’ and there is nothing in the Convention which forbids the voluntary movement of population into territory won in war (a war – in 1967 – that Israel did not start).

The worst aspect of the demonisation in the play is the libellous allegation that the Israeli bulldozer driver murdered Corrie. Here is how the play closes:

‘From the TV set, a recording of the transcript of an eyewitness account by Tom Dale.
Rachel walked to place herself in between the home and the bulldozer. As the bulldozer turned towards them, it had about 20m or 10 seconds clear time directly with her in its view to see where she was. It continued toward her at some pace with a mound of earth building up in front of it. And as the mound of earth reached Rachel, she obviously felt that in order to keep her balance , to keep her footing she had to climb onto this mound of earth to prevent being overwhelmed by it.  When she did this, it put her head and shoulders clearly above the top of the bulldozer blade and therefore clearly in view of the bulldozer driver, so he knew absolutely that she was there. She falls down the mound of earth and out of sight of the drivers. So he has essentially pushed her forward down the mound of earth.  And then she starts to slide and then you see one then both of her feet disappear and he simply continued until she was, or the place where she had been, was directly beneath the cockpit of the bulldozer. They waited a few seconds then withdrew leaving his scoop on the ground. Only later when it was much clear of her body did it raise its scoop. I ran for an ambulance, she was gasping and her face was covered in blood from a gash cutting her face from lip to cheek. She was showing signs of brain haemorrhaging. She died in the ambulance a few minutes later.’

But the IDF’s own investigation concluded that the driver of the bulldozer could not see her and that her death was an unfortunate accident to someone who had trespassed in a forbidden military area:

“The driver at no point saw or heard Corrie. She was standing behind debris which obstructed the view of the driver and the driver had a very limited field of vision due to the protective cage he was working in.”

After Tom Dale’s account in the play, the audience is treated to a maudlin home video of the 10-year-old Corrie affirming her opposition to world hunger … then the lights go out.

My Name Is Rachel Corrie is a sad play about a naïve young woman who is irresponsibly exploited by the ISM and tragically dies a painful and premature death.  But it fails to show the terrorism which was killing hundreds in Israel at that time and which Israel was combatting by its operations in Gaza; it whitewashes the ISM; and worst of all, Rickman and Viner falsely accuse the Israeli bulldozer driver of murdering Corrie. Under oath, he insisted that he had not seen her.

At a time of heightened antisemitism, this season will foment hatred of Israel and thus of Jews in the UK who support Israel (which is the vast majority). That the Young Vic should stage it, is thoroughly irresponsible.  Presumably its decision-makers would not stage a play which demonises Muslims or blacks to the extent that this play demonises Israeli Jews – how, then, do they defend their decision?

Update: Here is the text of the judgement in the case of Rachel Corrie (Haifa District Court)