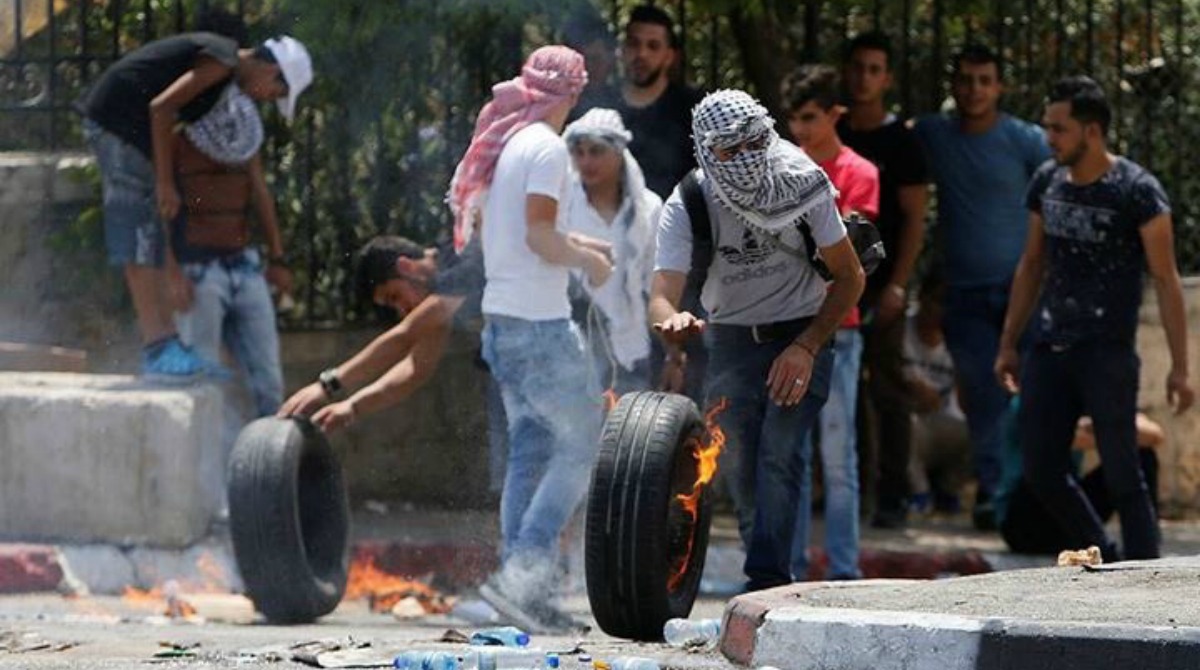 As had been feared, today has seen violent demonstrations in Jerusalem and the disputed neighbouring territories as a result of Arab incitement over the metal detectors installed at Temple Mount a few days ago.

At least two Arabs have been shot dead in as yet unclear circumstances and dozens have been injured, while hundreds of Arab rioters have been hurling rocks and burning tyres at Israeli police. Protests have also taken place across the Middle East.

Israel erected the metal detectors after the terrorist attack a week ago when three Israeli Arabs burst out of the al Aqsa compound fully armed and murdered two Israeli police officers (who happened to be Israeli Druze) stationed just outside, wounding a third.

Israel police yesterday released video footage from the attack showing how the terrorists were helped by a fourth man to smuggling the guns into the al Aqsa Mosque on the morning of the shooting. You can watch the video here.

While searching the Temple Mount compound after the attack, the authorities say they found a stockpile of weapons. So much for al Aqsa being a holy Islamic site: the mosque was in fact being used here as an arms storage depot in a theatre of war.

Israel and Jordan are currently discussing further security arrangements for Temple Mount. Jordan has been characteristically and irresponsibly unhelpful: failing to condemn the attack itself, criticising Israel instead for temporarily shutting it while it searched it for weapons and insisting that the metal detectors be removed.

The Waqf has told Muslim worshippers not to go through them to al Aqsa but instead to pray in the street outside the compound. This has the clear dual intention of staging a spectacle for the cameras and fomenting a climate of protest.

The Israel government has stressed it has no intention of changing the uneasy (and to Jews, profoundly discriminatory) arrangements on Temple Mount. Indeed, there have been reports that Jews taking advantage of the Waqf’s walkout to go up onto the Mount to pray have been stopped by the Israeli police, prompting protests (although quite where they want to pray isn’t clear, since religious Jews do not consider it permissible to do so on the actual site of the destroyed Temple).

Over the years, moreover, Palestinian officials and preachers have repeatedly incited violence against Israel on the transparently false pretext that Israel intends to take over al Aqsa. What is notable about this incitement is that it vilifies Jews and Judaism, using classic antisemitic and Islamic tropes.

Thus Abbas promised not to allow the Jews’ “filthy feet” on Temple Mount.

A preacher outside al Aqsa implored followers to “slaughter” Jews.

Another teacher on the Waqf payroll told followers that the Nazis burned the Jews of Europe during the Holocaust because the Jews had been kidnapping children to use their blood to bake Passover bread.

Last February a PA official claimed the Israelis were planning to “Judaise” Jerusalem and “defile” al Aqsa. “‘If the settlers [ie the Israelis] and the extremist groups do not stop this, they will find their deaths at the hands of the Muslims there, who will not allow the enemy to harm the al Aqsa Mosque and to defile it, even if it costs them their lives.”

Israel has no intention to harm al Aqsa nor touch it in any way. Jerusalem cannot be “Judaised” because it is, was and always will be central to Judaism and a Jewish city by right.

And so, having provoked and perpetrated the murder of Israelis yet again, the Arabs’ response to the modest practical measures taken to prevent them from murdering more Israelis is to incite their followers to yet more attacks by howling that such Israeli defence is actually aggression.

They are doing so because they know they have a massive audience in the west all too eager to accept this psychopathic reasoning. And that, perhaps, is the most terrible thing of all.