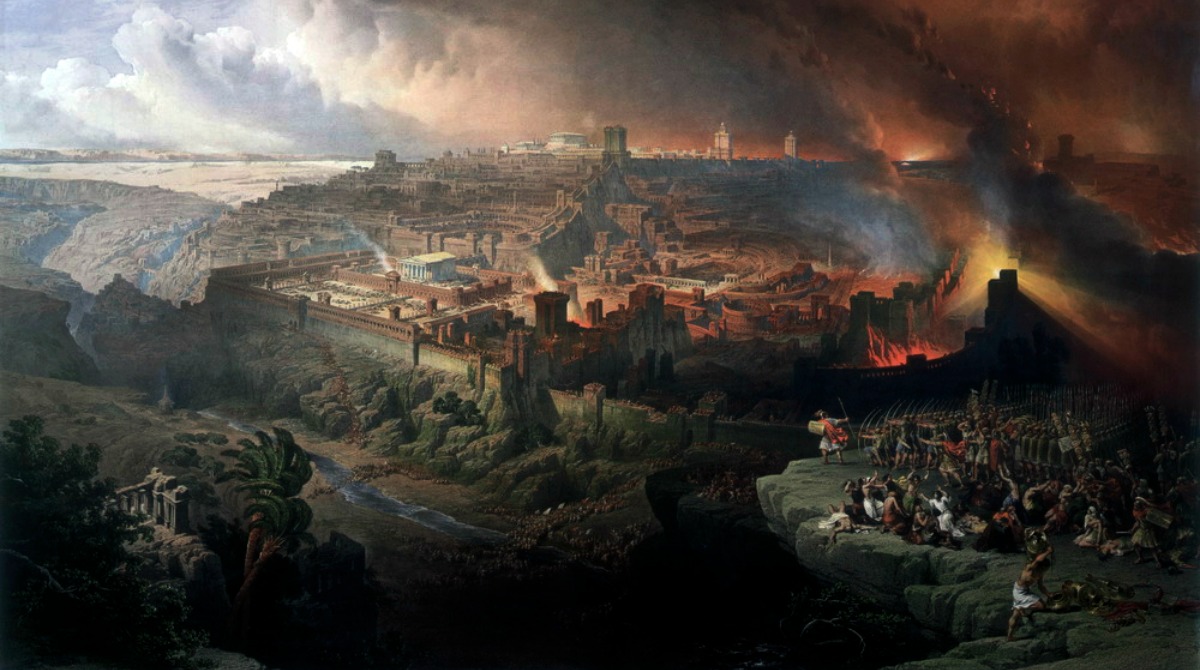 Tonight Jews start the fast of Tisha b’Av, or the ninth of the month of Av. I cannot recall a year when this fast has been so freighted with anxiety, poignancy and the full weight of Jewish history.

The Temple, that is, that stood in Jerusalem on what is now called Temple Mount; the one to whose remaining stones Jews turn their faces when they pray as the site of their ancient holy of holies; the one that is the cynosure of their faith and whose existence and meaning are threaded through their prayers.

The one that the Arab Muslims deny ever existed. The one on whose ancient site on Temple Mount Jews are barred from praying in case this is used as a pretext by the Arab and Muslim world to start World War Three. The one which the Arab Muslims claim is their third holiest place but which they have turned into a theatre of war from which to attack and murder Jews and other Israelis.

This year Tisha b’Av is taking place in the shadow of the murderous violence being perpetrated by the Arabs from Temple Mount, incited by the false claim that Israel is trying to destroy the al Aqsa mosque and bar Muslims from praying there. Israel, of all places – the only country in the Middle East where all Muslims along with worshippers from every other faith can pray in safety.

The Arab Muslims claim there never was a Jewish Temple there. Mahmoud Abbas, whose “doctorate” was in denying the Holocaust, denies there was ever a Jewish Temple there. He and the rest of the Arab Muslim world say it is a place that has only ever been sacred to Muslims. Their denial that the land of Israel was ever the Jewish homeland is centred on their claim that there never was a Temple in Jerusalem, only the al Aqsa mosque.

But al Aqsa was built on top of the ruins of the Temple, in order to bury and conceal it and thus bury and conceal the national history of the Jews – the only people for whom Israel was ever their national kingdom, thousands of years before Islam was even invented and the Arabs invaded as colonialist conquerers.

They want to bury and conceal it because their war of extermination against Israel is based on the lie that the Muslims are the original inhabitants of the land. But they have not succeeded.

And that’s what so many in the west also don’t grasp – that the Jews alone are the indigenous people of the land, and that Judaism is based on an actual nation which practised its religion in the actual historic kingdom of Judea.

But because Islam holds that any territory ever occupied by Muslims remains Muslim for ever and can be ruled by no-one else, the Muslim world will not accept this. That’s why the war over Temple Mount is not being waged in the name of the Palestinians or even the Arabs but – according to Mahmoud Abbas amongst others – all Muslims.

It is an Islamic holy war – not just against the State of Israel but against Judaism itself. For both the Temple and the land of Israel are central to Jewish religious belief. Not all Jews are Zionists, for sure. Neither are all Jews religiously observant. But Judaism is inextricably composed of the people, the religion and the land. Those who want to strip away the land from the Jewish people are attacking Judaism itself.

Some Jews question why Tisha b’Av remains a day of mourning when Israel has been so triumphantly reborn from the ashes of history. But today it’s surely more important than ever to mourn. For the destroyers are still with us, the Temple Mount is still occupied and the stones are still being hurled down from it. The only difference is that the murderous destroyers hurling the rocks today are not the Romans but the Arab Muslims.

Well, the enemies of the Jewish people didn’t destroy us before; against impossible odds the land of Israel was restored to its indigenous people, the Jews; and they won’t succeed in destroying us now, or ever.