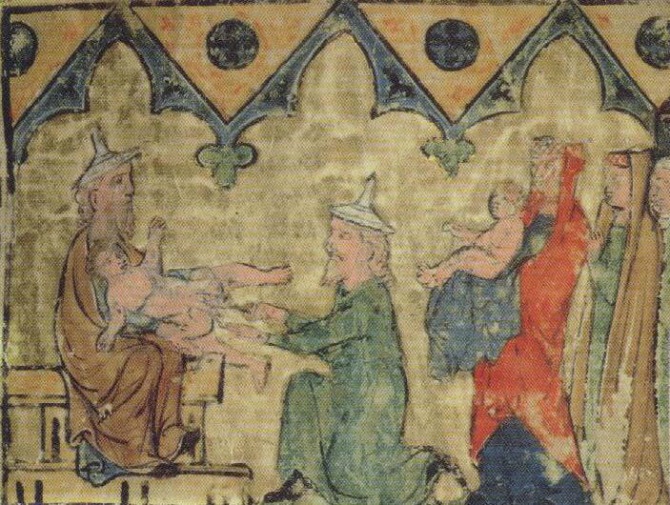 The chill winds of secular intolerance are blowing ever more strongly across Europe, with Jews now struggling against the blast.

A bill is being considered by Iceland’s parliament to ban circumcision for children under 18 years old. So here we go again.

Back in 2012, a court in the German town of Cologne ruled that the circumcision of a four-year-old Muslim boy constituted “bodily harm.” After an uproar, Germany hastily legalized ritual circumcisions if performed according to medical practice.

German objections to circumcision nevertheless did not die down. The Icelandic bill is drawing on increasing hostility within Europe to the practice. In Britain, a survey by the National Secular Society indicates that some 62% want Britain to follow Iceland’s example.

This is not the only attack on religious rites. There are bans on ritual slaughter in Denmark, New Zealand, Switzerland and other European countries and jurisdictions.

Although these are attacks on Islam as well as Judaism, they threaten Jewish religious life most of all.

Muslims are more flexible over ritual slaughter by allowing a measure of animal stunning which Jews cannot permit.

Circumcision bans are most threatening of all to Jewish life because the circumcision of eight-day old boys, or brit mila, is absolutely fundamental to Judaism.

In Genesis, God tells Abraham all his male heirs must be circumcised and any Jew who breaks this covenant will be cut off from his people.

Brit mila is the non-negotiable marker of Jewish identity. More than any other practice, it can be said to have kept the Jewish people together throughout the centuries.

A country than bans brit mila is a country that effectively bans Judaism.

Rabbi Pinchas Goldschmidt, president of the Conference of European Rabbis, has said the Icelandic ban is one of a series of “covert initiatives” to rid countries of their Jewish population.

Such protests cut no ice whatever with secularists. Banning circumcision, they say, has nothing to do with hostility to religion.

Their concern is solely to prevent harm to children. These arguments are specious and ignorant.

Far from harming a child, circumcision is considered by many as beneficial to health. Some 60% of Americans are circumcised, the vast majority of such procedures having nothing to do with religious belief.

Both the US Centers for Disease Control and Prevention and the American Academy of Pediatrics claim the benefits of circumcision outweigh the downside, citing evidence that it lowers a man’s risk for HIV, urinary-tract infections and penile cancer. The World Health Organization has also said it might slow the spread of HIV.

Secularists, however, define harm as an involuntary and irreversible alteration to the body which they view as an assault on personal autonomy.

Yet they mount no such campaign against the common practice of piercing the ears of baby girls or young children.

Instead, they liken the circumcision of boys to female genital mutilation. The comparison is grotesque. FGM, which is a cultural rather than religious practice, is barbaric because it causes lifelong pain and suffering with the aim of curbing a woman’s sexuality. Brit mila causes the baby negligible pain or distress.

The secularists deny that their campaign against circumcision is anti-Jew. Yet as one British commentator has observed, “some of the most virulent antisemitism on Twitter is obsessed with foreskins and pictures of demonic rabbis holding knives.”

The self-delusion of such campaigners is remarkable. In 2013, the leading Norwegian daily Dagbladet published a caricature of what appeared to be Jews torturing a baby during a circumcision. The cartoonist, Tomas Drefvelin, said he meant no criticism of either a specific religion or a nation but a general criticism of religions.

BBC Radio’s The Moral Maze discussed all this last week (although I am a regular Maze panelist, I wasn’t on that particular program).

On the show, those calling for circumcision to be banned in Britain hotly denied they were anti-Judaism or anti-religion.

On the panel the Anglican priest Giles Fraser – the son of a Jewish father and himself the father of an infant Jewish boy who Fraser ensured had a brit mila – declared emotionally that just below the surface of such calls to ban the practice lay blood-libel images of Jews and knives. His remarks provoked a Twitterstorm accusing Fraser of child abuse and mutilation.

Resistance to Islamist extremism in Britain and Europe has fueled a general climate of intolerance toward religion in general. There is now a widespread and growing view that distinctive practices marking out religious ways of life are equally divisive, threatening or abhorrent. Yet at the same time such critics deny their target is religion.

In Iceland, the campaign to ban circumcision is led by a Progressive Party member of parliament, Silja Dögg Gunnarsdottir. She said she didn’t think it was necessary to consult Jewish and Muslim groups on this issue, because she “didn’t see it as a religious matter.”

On The Moral Maze Stephen Evans, chief executive of the National Secular Society, scorned the argument that brit mila was fundamental to Judaism. It wasn’t a theological issue at all, he claimed, merely a “tradition” from which Jews could move on.

His ignorance was exceeded only by his arrogance.

The attempt to ban circumcision also shows that secularism does not, as its proponents believe, occupy a neutral space in the public sphere. It has become instead a movement to impose its dogma on the whole of society.

And the hypocrisy is epic. While claiming they want to protect children’s autonomy, secularists are going all out to promote euthanasia. So much for human rights.

In 167 BCE, Antiochus ordered all Jews to leave their sons uncircumcised or else face death. In the Middle Ages, Jews were accused of using the blood of ritually murdered Christians to heal the wounds of circumcision. In the last century, Stalin banned ritual circumcision along with other Jewish religious practices.

Now we are being told that practicing the Jewish religion is a violation of human rights. Echoing the bigotry of centuries, secularism has become the tyranny of the modern age.