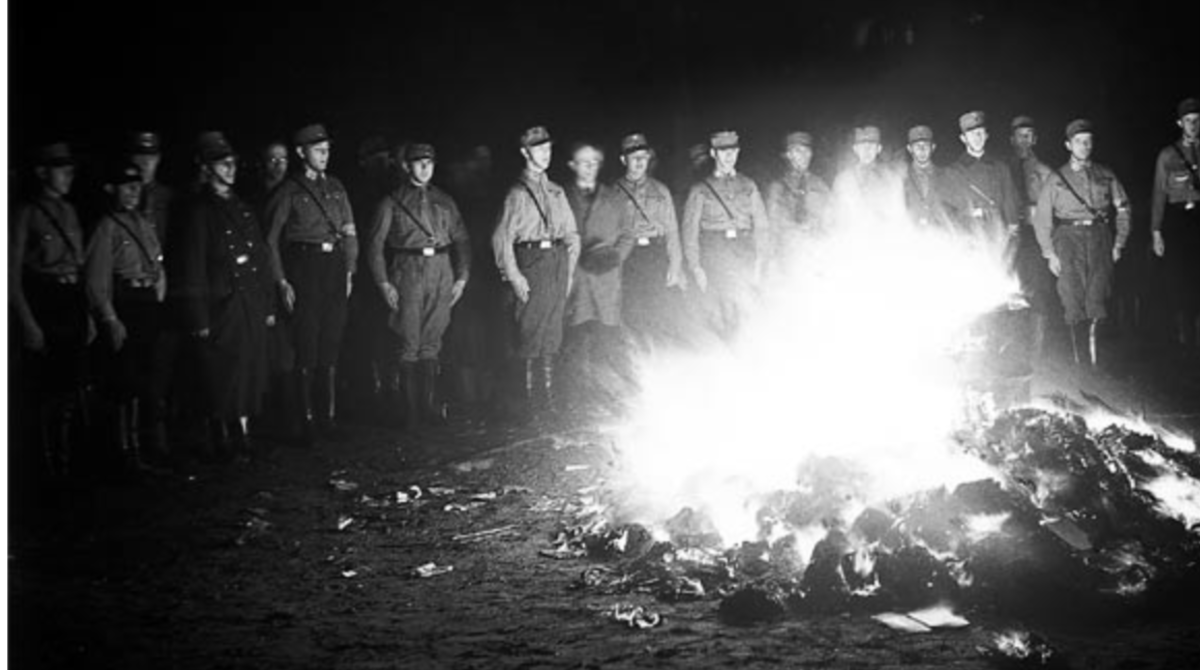 In Britain, statues of historical figures associated with colonialism or slavery are being pulled down or slated for removal.

This is to appease the Black Lives Matters activists and their supporters, both black and white, who have seized upon the appalling death of George Floyd in Minneapolis police custody to claim that western society is fundamentally racist.

The destruction of these statues and other similar artifacts, which are part of the cultural memory of a civilization, inescapably calls to mind another act of cultural extermination — the Nazi regime’s burning of books in the 1930s.

They threw into the fire books by Jewish, Socialist, liberal or any other authors they deemed to be inimical to Nazi ideology. They did this to erase a western culture they wanted to destroy and replace by their own horrific ideas.

The removal of Britain’s statues is not just a protest against racism. It’s an attempt to destroy an entire culture and replace it by a society organized according to certain unchallengeable dogma.

Of course, there’s anti-black, racial prejudice in America and Britain. There’s also vicious black antisemitism, just as there are black people who are deeply sympathetic to the Jewish people and Jews who are prejudiced against black people.

The point is that racial prejudice exists in every single society — in the developing world, as well as in the west. To single out the west as endemically racist is therefore a gross double standard and calumny.

As usual, however, liberal Jews have taken the wrong side in this most explosive development of the culture wars against the west. Having fully internalized the inversion of truth and lies, victim and oppressor involved in identity politics they have uncritically embraced black victimology, which casts black people as the invariable victims of white society, and championed the agenda and values of Black Lives Matter.

Endorsing that group’s representation of its own anti-white, racist, antisemitic animus as anti-racism, they have also engaged in the vicious demonization of anyone who dares call out BLM activists for what they really are.

After the Zionist Organization of America president Mort Klein denounced BLM on Twitter as a “a Jew hating, White hating, Israel hating, conservative Black hating, violence promoting, dangerous Soros funded extremist group of haters,” Rabbi Rick Jacobs, president of the Union of Reform Judaism, denounced him as a racist and tried to get the ZOA kicked out of the influential Conference of Presidents of Major Jewish Organizations.

In Britain, the Board of Deputies of British Jews has set up a commission to investigate racial prejudice within the Jewish community. It isn’t clear whether this is to be confined to alleged racism by the community towards its tiny number of black Jews or whether it will cover alleged community racism towards non-Jews.

There may be instances of community prejudice against some black Jews or Jews married to black people. Those who have experienced the isolation and rejection resulting from this deserve sympathy, and it is a worthy aim to seek to address it. However, the context in which this inquiry has been launched is not auspicious.

In both Britain and America, anyone who criticizes black victimology for its anti-white, anti-Jewish, insurrectionist or subjectively suspect side is called a racist. A Twitter mob then assembles to strip such people of their reputation, platform or job for the crime of telling the truth.

In an atmosphere redolent of the 17th-century Salem witch trials, the risk is that the Board of Deputies may have appointed a hanging jury to find Britain’s Jewish community guilty under rigged cultural rules. If so, this would be yet another example of the board “taking a knee” to people with a rotten agenda but who have the power to dictate the terms of public debate.

It’s not just that many liberal Jews are on the wrong side of this titanic struggle to defend civilization. It’s not even that they don’t recognize the danger to themselves from an agenda of destroying a culture whose roots lie in the Hebrew Bible. It’s also a striking fact that the tactics now being used in this ramped-up onslaught against the west are mirrored in the attempt to bring down the State of Israel.

Pulling down the statues is the physical manifestation of the decades-long attempt, through the hijack of the education system, to destroy the west by erasing the record of its achievements and presenting it instead as intrinsically racist, colonialist and evil.

In Israel, Palestinians have systematically vandalized archeological digs in Jerusalem in order to tip into the garbage excavated materials containing possibly priceless artifacts. They do this to destroy the evidence that is constantly being dug up of the ancient kingdom of Israel and thus the unique claim of the Jews to the land. By attacking these ancient items, they are physically trying to erase the Jews’ own history.

Black victimology routinely blames others for all disadvantage suffered by black people, denying the part played by chance, misfortune or their own behavior, while claiming moral impunity as “victims” for any wrongs they may themselves do.

Palestinians blame Israel for all their misfortune, falsely accusing it of driving them out of their homeland and denying them their own state. At the same time, they deny their century-old war to destroy the Jewish homeland and have always refused the offer of a Palestine state that has been repeatedly made to them ever since the 1930s.

BLM activists smear western society with distorted claims about slavery and oppression in order to both facilitate and obscure their real agenda of overturning white capitalist society.

Palestinians smear Israel with false claims about occupation and oppression in order to both facilitate and obscure their real agenda of wiping Israel off the map.

Anti-white racists project their own offense of racism onto others, falsely accusing anyone who criticizes the sinister agenda of black victimology of being a racist.

Palestinians, whose aim is a Palestine state from which all Jewish residents of the land would be driven out, project their own agenda of racist ethnic cleansing onto Israel which they accuse with malicious and demonstrable absurdity of committing genocide against the Palestinians.

BLM supporters who single out the west as the endemically racist perpetrators of slavery while ignoring the same or worse in the rest of the world subject the west to a double standard.

Palestinianism is the poster cause of western progressives. It is no coincidence that the tactics being used in the culture war against the west turn out to be the same tactics used against Israel.

What starts with the Jews never stops with the Jews. In this current mayhem on the streets of America and Britain, so it is now playing out before our horrified eyes.