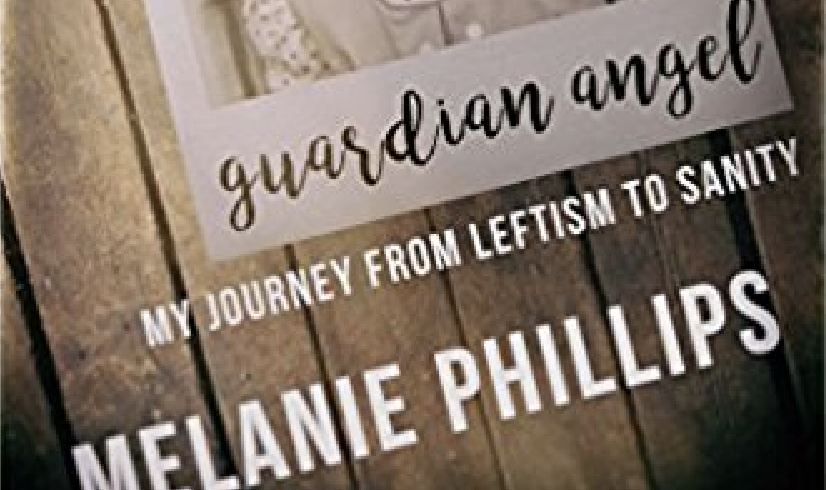 On the Conservative Woman site, Kathy Gyngell has written a super review of my memoir, Guardian Angel. My grateful thanks to her, and I reproduce it below. You can buy the book on Amazon here and here.

Anyone wondering if they’d gone insane or lost their moral compass last week as they witnessed a terrorist bride transition from Jihadi poster girl into a Leftie victim pin-up in a few days, or couldn’t understand the frightening collapse of judgment over the new, exploited army of child climate activists – and Conservative government ministers egging on their strike – is advised to reach quickly for Melanie Phillips’s memoir, Guardian Angel, My Journey from Leftism to Sanity.

This, her most up-to-date explanation of a world turned upside down, is the necessary antidote to the real insanity or mainstream madness that has swapped reason for unreason and is striking at the heart of Western civilisation.

If you haven’t come across it before, you are not alone. The reason is simple – the mainstream media in the UK and US chose to ignore it when it was published last year, as they did with the publication of her first novel, The Legacy. Though her debut pages of fiction bring alive an antisemitism so endemic in our culture that finds Jews today still apologising for themselves or otherwise disclaiming their identity and heritage, it has received scant reviews.

Why the silence? Why this paralysis over inconvenient truths? Because so few dare upset the applecart. Far safer to accept muddled and contradictory mores as ‘the new culture’ when disputing them has consequences, as seen in the regular reports of the penalties paid for not toeing the party line, whether in universities, schools, local authorities or the health service.

Dissent as Melanie documents it through her own journalistic battle is no longer tolerated; easier by far to put up the white flag or agree to re-education. But from the moment the scales fell from her eyes working as a journalist at the Guardian this route never tempted her.

Her ‘self-imposed exile’ from the Eden of that newspaper’s culture of ‘narcissistic self-regard based on a fixed belief in their own superiority and righteousness, nurtured by indulgence and privilege’, she traces back to her own lonely childhood. Despite being one of restrictions, she never thought them oppressive or necessary to rebel against. They did however leave her outside rather than inside the social crowd, ‘never like the other girls at Putney High’ where ‘for the child who didn’t know how to play, studying was a recreation’. School became her life and her family, as she naively hoped her revered employer, the Guardian, would too.

The book is part documentation and part retrospective analysis of the gelling of the realisation that, far from comment being free and facts sacred, ‘Guardian news stories spun facts while its editorial comments columns treated opinion as sacred’. Her passage through its newsroom to news-editor and later on to opinion writer is an account of one conflict after another with colleagues who increasingly regarding her as beyond the moral pale and ‘on the other side from all that was good, decent and just’ – marginalised her.

It resonated as I read. I have found myself cast, in my own far less effective culture wars since the early 1990s, as a dinosaur, a Mary Whitehouse figure to be mocked (anything to tar me with when they couldn’t discredit my facts) when I advocated marriage and motherhood, or spoke out against the heartless daycare movement and, later, most viciously when I took up the cudgels against the devastatingly damaging drugs culture so called liberals were so desperate to defend. I was censorious, a throw back to the fifties, and when it came to single mums, who, to the Left were necessarily victims of circumstances rather than ever accountable for their own behaviour, the problem was turned on me for ‘stigmatising them’. To analyse was to stigmatise – a crime in itself.

I wish I’d had Melanie’s clear logic to aid me in challenging their mendacious thinking. As it was, I too often found myself on the back foot, frustrated and ill-equipped or lacking the confidence to take their leftism on. To read by her own admission that Melanie lacked confidence too – and felt like an imposter (unworthy perhaps?) – startled yet warmed me to her. And made me all the more in awe of her courage.

Her trajectory through the Guardian was of one demolition job after another as she ripped open the Left’s favourite assumptions and credos, from the environment to education, from the family to Israel. But if Phillips stumbled into the culture wars as she says, then she did it with aplomb, in face of her colleagues’ disdain, driven by her single-minded pursuit of the truth, shattering their peace. The crisis in education she wrote to their dismay was not about spending cuts but lousy schools that had abandoned structured teaching: about an educational establishment perpetuating its own myths through generations of poorly taught children.

Branded both elitist and a heretic, she continued ‘onwards to the fire’. In the Left’s mindset she realised subjective experience was dominating over objective authority. This was something which would not merely transform family life, ‘but turn the understanding of what was normal and what was transgressive inside out’. It explains today the astonishing contradiction in feminist thinking that allows the oppression and mistreatment of women in fundamentalist Islamic society to be ‘understood’ (ignored or forgiven) because of their different culture.

By far Phillips’s biggest break with the Left – the one she describes as the cultural Rubicon – was in the late eighties over the breakdown of the family, as it was for me too and around the same time. Whereas for me it was the simple fact of having children myself to nurture that drove me to question received feminist wisdom; for Phillips, already a social policy commentator, it was the statistics – indisputable sets of evidence of family breakdown crossing her desk, of middle as well as working class, and its devastating impact on child outcomes.

One A H Halsey, an ethical socialist who happened also to have tutored me at Oxford, came to influence Melanie. He’d written the foreword to a book still quoted today, documenting from longitudinal national cohort study evidence how children, regardless of social class, fared worst where the mother had never been married, where the father was absent, and how the children of divorced parents were next in line to fare badly.

Her description of the furore and denial sparked by this evidence – and her communication of it – that family breakdown hurts children makes the book worth buying just for this.

No better example of the displacement of truth by ideology exists than in governments’ (Tory as well as Labour) subsequent response to this – a perverse determination to push the mother out of the family too, replacing her with impersonal, third party or State care, from birth if need be, rather than restore the father to the family.

Whatever in the bigger picture of truth inversion that her final chapters detail that we find ourselves fighting on a daily basis – education, the environment, moral relativism or that which underlies it all, the attack on the Judeo-Christian moral code – Melanie’s memoir provides the guide we need to keep our sinews stiffened, to know what to dispute, what not to be afraid of, what never to deny or be ‘shamed’ over.

Her career in journalism mirrors ‘what has happened to British society and western culture during the past three decades’. In her words ‘it helps explain what is otherwise very hard to understand and bewilders many of us: that our cultural and political elites have simply turned truth and justice inside out and, with argument replaced by insult and abuse, taken leave of reality itself’.