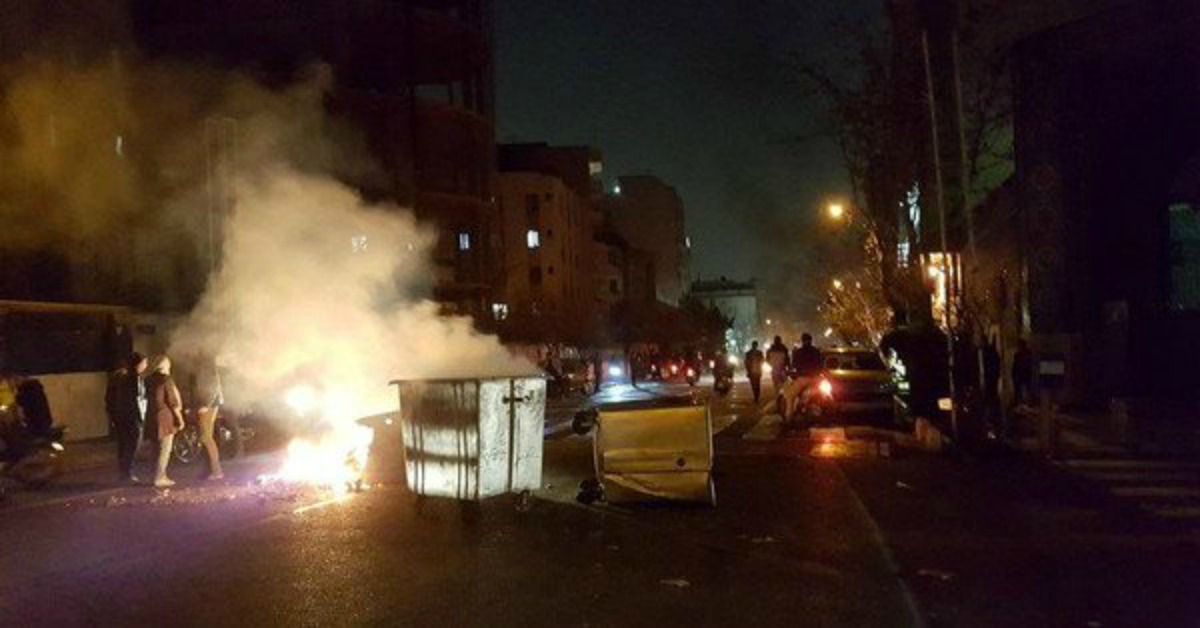 What’s happening in Iran is of the greatest significance. Thousands of anti-regime demonstrators have taken to the streets now for four days in protest. Reports suggest that at least twelve people have been killed by government troops. It is hard to over-estimate the courage of those demonstrators.

The scale and scope of these demonstrations across Iran is unprecedented: estimates suggest they have been occurring in at least 30 cities, including some places long deemed to be the regime’s power base.

With President Hassan Rouhani acknowledging economic “grievances”, a “lack of transparency” and “corruption”, the regime has responded with patent alarm. As well it might. If these protests continue to accelerate, they can produce an upset that was unimaginable until now. For this is an uprising against the regime itself.

Demonstrators have been chanting “Death to Khamenei” (|Iran’s supreme Leader), “Reformists, hardliners, it is game over now,” “Death to the Islamic Republic” and “Shame on you, mullahs.”

As Dr Majid Rafizadeh observes here, this uprising is more significant even than the “Green Revolution” demonstrations in 2009. People then were protesting against rigged elections and the presidency of Mahmoud Ahmadinejad. Today they are demanding regime change: an end to the Islamist regime that took power in 1979.

This of course shows up as utterly risible the gloss initially put on these protests by the western media – those outlets, that is, that even bothered to report the demonstrations when they first erupted – that the issue which has brought Iranians onto the streets is merely economic privation.

They said this because the media reflects the European/Obama view that the Iranian regime is not an enemy but an ally. How then can they acknowledge that the Iranian people are rising up against oppression?

The Obama/EU axis and its media supporters have consistently dismissed or denied Iran’s role as the world’s principal sponsor of terrorism. They have ignored or downplayed its march to regional hegemony. They procured or applauded the shocking nuclear deal which enables this fanatical Islamist regime –– which has been at war with the west since 1979 and which openly declares its genocidal intent to wipe out out Israel – to become a nuclear armed power in ten or fifteen years’ time: a deal which, though sanctions relief, has also funnelled money to the regime to enable it to step up its terrorism and embed itself further in the region.

The result has not been merely that the free world has been placed in hugely increased danger. The European/Obama axis also abandoned and betrayed the Iranian people who have been suffering under the cruel tyranny of a regime which oppresses women, jails dissidents and hangs gay men from cranes.

When the people previously rose up in the 2009 “Green Revolution”, they were brutally suppressed. That revolt was put down with the tacit connivance of President Obama who said and did nothing to support them. So why have the Iranian people now risen up again and in such huge numbers? The answer is two words: Donald Trump.

For he has changed the dynamic of the entire region by signalling from the get-go that he has the Iranian regime in his sights. The Iranian people have been thus encouraged to believe they will be backed by the president of the most powerful nation on earth, rather than betrayed as they were by his predecessor.

“The people are finally getting wise as to how their money and wealth is being stolen and squandered on terrorism. Looks like they will not take it any longer. The USA is watching very closely for human rights violations!”

“Oppressive regimes cannot endure forever, and the day will come when the Iranian people will face a choice. The world is watching!”

“The entire world understands that the good people of Iran want change, and, other than the vast military power of the United States, that Iran’s people are what their leaders fear the most….”

Slowly, reluctantly, the media are being forced to revise their previous indifference and dismissive attitude. Yesterday, CNN reported that this wave of protests seems to be a direct challenge to the rule of the Supreme Leader.

“’This is something that didn’t happen in 2009. This is a huge thing to happen in Iran’, said Nic Robertson, CNN’s international diplomatic editor.”

You don’t say! But if you think this means CNN is finally waking up to reality, you’d better calm down. For lower down the story, it solemnly tells us:

“The consensus from experts: US President Donald Trump’s tweets about the situation are not helpful.Rather, they say, the world should show solidarity with the Iranian people by supporting freedom of expression.”

Trump’s tweets are aimed at both the regime and the demonstrators. To the regime he’s saying: your time is up and the US will be helping the people make that a reality. He’s saying this to demoralise and weaken it. To the people he’s saying: we’re with you. That message of backing from the most powerful leader in the world is aimed at giving the people the courage to continue. Without it they are far less likely to persevere.

If people are to rouse their courage to pit themselves against the might of a regime that can kill and crush them, the support of the rest of the world is absolutely crucial. So far, though, Trump is alone in offering such support. Apart from Britain’s Foreign Secretary Boris Johnson feebly and pointlessly tweeting his “concern”, Britain and the EU have been silent. They are not supporting the people of Iran against the regime. They are not trying to weaken it. How can they? They have helped empower it. As have their cheerleaders and Obama sycophants in the media.

Dr Rafizadeh writes: “The fault lines are completely visible. If you are on the side of justice, freedom, and basic human rights, and if you respect humanity, you will not be able to remain silent. Let us at least give moral support, if not more, to the Iranian people. Justice and truth need to prevail. This is what history has repeatedly shown us. Let us not be on the side of history that would remain silent in the face of such crimes against humanity, let us not join the ranks of other dictators, terrorists, and criminals, that turned a blind eye to violence, and the will of brave, innocent people.”

Alas, on this Britain and Europe are, as so often, on the wrong side.