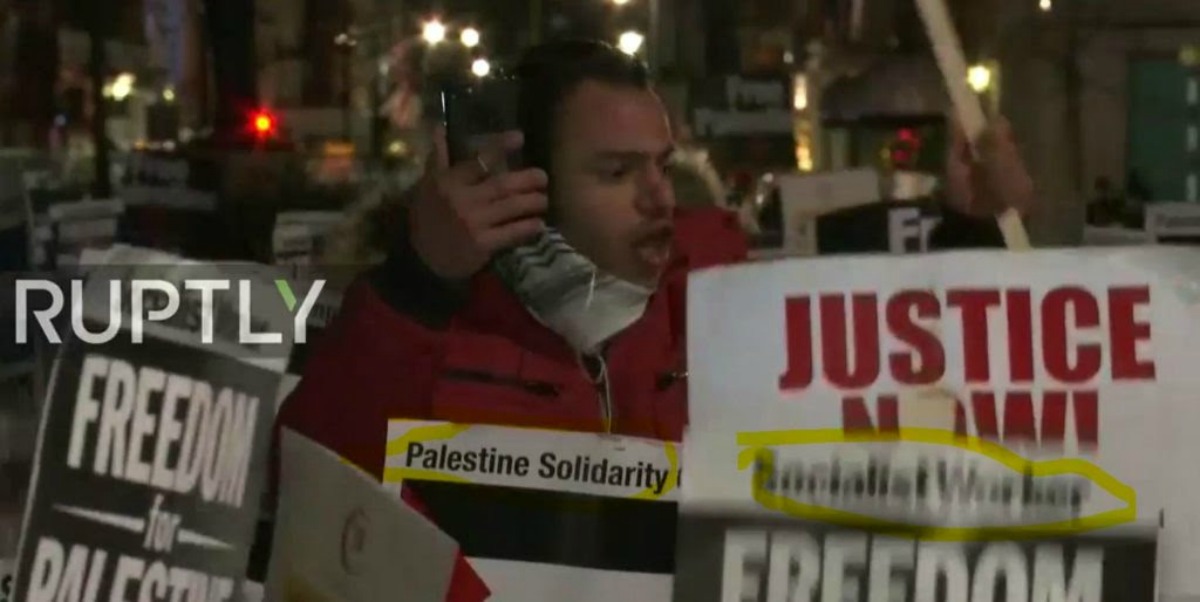 A demonstration was held in London last week in protest at President Trump’s recognition of Jerusalem as Israel’s capital. It featured the usual suspects: the Palestine Solidarity Campaign, Stop the War Coalition, Friends of Al Aqsa, War on Want, Socialist Worker.

Nothing surprising about any of that. The far left — along with significant NGOs — is motivated by a vicious loathing of Israel and support for those committed to its extermination. It’s hardly news, therefore, that they would react so virulently against the idea that the Jewish people are fully entitled, legally, historically and morally, to declare that Jerusalem, which was only ever the capital city of the Jewish people’s own national kingdom, remains its capital city today.

Oh –– and Jewish Voice for Labour, which claims not to be anti-Zionist but merely to “uphold the right of supporters of justice for Palestinians to engage in solidarity activities”, was also at the demo.

Well, this is the “right” that JVL upheld last at last week’s “solidarity” activity. Watch here as the demonstrators chanted “Khaybar Khaybar, ya yahud, jaish Mohammed, as yahud”.

This translates as “Khaybar, Khaybar, oh Jews, the army of Mohammed will return” — a reference to the Muslims’ slaughter of the Jews of Khaybar in 628 CE.

For Islamist extremists and terrorists, this is a touchstone historical event which they seek to re-enact today. Chanting this is to declare their intention to do so. It is effectively incitement to murder Jews. And it was chanted on the streets of London, at a demonstration supported by Jewish Voice for Labour and under the noses of the “hate-crime” obsessed British police.

Of course, the police don’t speak Arabic. But shouldn’t someone, somewhere in the British security apparatus have worked out by now that it might be useful to deploy a few Arabic speakers at such events because they invariably feature a spot of incitement to genocide?

The indefatigable David Collier reports on his blog (which reproduced the picture above of one of those Khaybar chanters): “Within the crowd, comments about ‘bloodsuckers’ could be heard, along with other hard-core antisemitic statements. These groups, all of them, need to be held to account for aligning with blatant anti-Jewish activity in London”.

Of course nothing of the kind will occur. Three days after that demonstration, The Times reported that Tahra Ahmed, who runs a volunteer network to help victims of the appalling Grenfell tower block fire in Kensington, west London last June in which more than 70 people died, has been making deranged claims about a Jewish conspiracy behind the fire against the background of a history of antisemitic remarks.

“Attending a town hall protest two days after the fire, she told reporters there that the fire was a ‘holocaust’. She has previously described Hitler’s massacre of Jews as the ‘holohoax’….she is known to antisemitism watchdogs who have been alarmed by her public claims about the Nazi genocide and ‘Jewish power’.

“…On Facebook Ms Ahmed has gone further in her virulent attacks on Jews. ‘Hitler and the Germans were the victims of the Jewish conspiracy to destroy Germany,’ she wrote.

“Of Grenfell she has said: ‘Watch the live footage of people trapped in the inferno with flames behind them. They were burnt alive in a Jewish sacrifice… Grenfell is owned by a private Jewish property developer just like the twin towers. I wonder how much Goldman [Goldman Sachs, a bank often targeted by antisemites] is standing to make in the world’s most expensive real estate location [Kensington]’.

“In fact, Grenfell Tower is owned by the local council. Goldman Sachs has had no involvement in the disaster apart from donating 100 boxes of children’s clothing and books, helping residents access technology and matching employees’ appeal donations.”

Earlier this year the Campaign against Antisemitism reported that Beinazir Lasharie was appointed deputy mayor of Kensington and Chelsea “to help the Council rebuild trust with residents following the tragedy at Grenfell Tower”.

This was despite Guido Fawkes in the Sun having reported her as posting a video on Facebook entitled: “ISIS: Israeli Secret Intelligence Service” and commenting on it: “Many people know about who was behind 9/11 and also who is behind ISIS. I’ve nothing against Jews… just sharing it.” Guido added: “Cllr Lasharie refused to apologise for her comments and said: “I don’t know what to believe any more. I’ve seen compelling evidence that links Zionists to ISIS.”

Lasharie defended herself against the charge of antisemitism on the grounds that her husband and children were part-Jewish and she didn’t think all Jews were Zionists. So that’s all right, then.

Look up the Khaybar chanting or Tahra Ahmed’s comments on the Guardian website and you’ll draw a blank. Look up Bainazir Lasharie and up comes an article published on Wednesday by Amelia Gentleman. It’s an entirely sympathetic piece — indeed, as a traumatised surviver of the Grenfell fire, Lasharie deserves sympathy. But as events in the Middle East remind us over and over again, victims even of the most barbaric atrocities may nevertheless themselves harbour barbaric views.

Gentleman writes of Lasharie: “The majority of the council is white, middle-class and over 50, and she has found it hard since her election as a councillor in 2014 to make her voice heard.” Yet she makes no mention of the Jewish conspiracy theory to which that voice reportedly gave expression.

Surprised? But to the left, politically approved victims are always morally pure and any claim of Muslim antisemitism is Islamophobic. Didn’t you know?