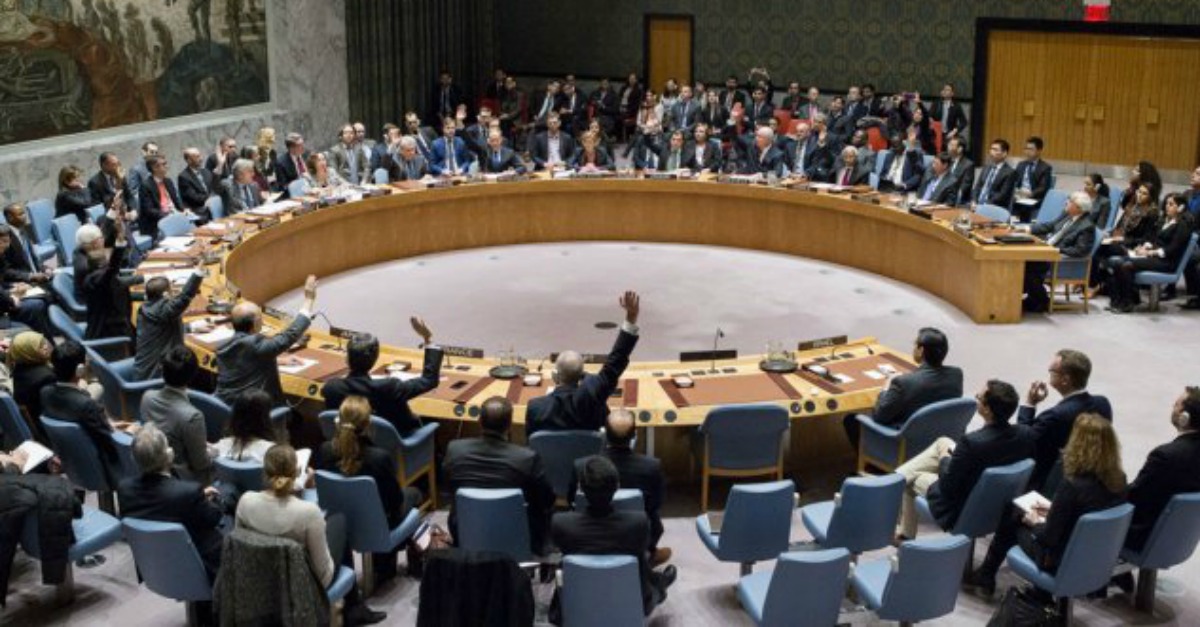 President Obama’s refusal to veto the sickening UN Security Council resolution against Israel yesterday was an act of pure malice.

The resolution, demanding an immediate halt to all Israeli “settlement” construction, was proposed by New Zealand, Malaysia, Venezuela and Senegal after its original sponsor, Egypt, had withdrawn. No-one can be in any doubt, though, that the resolution’s real sponsor was Obama, acting behind the backs of the US Congress and the American people.

Worse than that, it seeks to draw the border of Israel along the ceasefire lines established in 1949, when Israel fought off the Arab attempt to exterminate it at its rebirth. These ceasefire lines have been called the “Auschwitz borders” because they leave Israel militarily indefensible against its enemies. These include the Palestinians who remain committed to destroy Israel – and whose infernal cause the UN, manipulated by Obama, has now backed.

Worse even than that, the resolution is legally illiterate and perpetrates the Big Lie about Israel: that the “settlements” violate international law and that they are the major obstacle to peace.

They do not violate international law and no UN resolution can make them unlawful. Israel is legally entitled to build on this territory. This is principally because 1) it was never sovereign land belonging to any other state and 2) because it was land where the UN’s precursor body pledged that the Jews should be settled on account of their unique right to do so.

The idea that the settlements are the greatest obstacle to peace is ludicrous. There were no settlements before 1967, yet the Arab war of extermination against Israel had already gone on for decades.

There are two actual reasons for the Middle East impasse: first, that the Palestinians continuously incite their people to hatred of the Jews and mass murder of Israelis on the back of a narrative of lies which writes the Jews out of their own history in the land; and second, that America, Britain and Europe fund, sanitise and incentivise that genocidal Palestinian agenda.

What this vote so clearly demonstrates is what has been clear for years: that the UN is no longer fit for purpose. Dominated by states implacably hostile to Israel and the Jewish people, the UN has long demonstrated through its egregious application of double standards against Israel alone that it has become nothing less than an instrument of extermination against a member state. Only the US restrained it; now Obama has allied America to this agenda of infamy.

The US Congress and new American president must now finally hold the UN to account. It is insupportable that the American people should be financing this rogue body which is not just motivated by ideological and religious malevolence against the Jewish people but actively damages world peace.

There is another country, however, whose behaviour over this resolution must be noted with grim dismay (we can forget New Zealand, a stupid country of no other significance). As one of the five permanent Security Council members, Britain could have vetoed the resolution. Instead it actually supported it.

Since she came to power last July the British Prime Minister, Theresa May, has gone out off her way to express her warm affection for the Jewish people and her strong support for the State of Israel.

Her words now stick in the throat. If Obama has committed a foul and final act of malice towards Israel, Mrs May has done something just as bad, if not worse: presented herself as the friend upon whom the Jewish people can rely while her government stuck the knife not into Israel’s back, as did Obama, but its front.

Two weeks ago, Mrs May told the Conservative Friends of Israel that the 1917 Balfour Declaration, in which the British government committed itself to the re-establishment of the Jewish homeland in Palestine, was “one of the most important letters in history” and that next year’s anniversary of the Declaration was one that Britain would be “marking with pride”.

There is no reason to doubt that she is personally warmly disposed towards the Jews and Israel. But her understanding seems terribly limited. The reality, of which she seems to be genuinely unaware, is that for three decades after the Balfour Declaration the British did everything they could to undo it.

They turned a blind eye to Arab pogroms against the Jews of Palestine. They tore up Britain’s internationally binding obligation to settle the Jews throughout that land, making Britain an accessory to the Holocaust by refusing Jewish refugees entry to Palestine during the Nazi period. And they offered the Arabs, as a response to their murderous violence against both the Jews and the British, part of the Jews’ own entitlement to the land.

Britain’s wholesale disregard of international law, its craven appeasement of the Arabs’ violence and its further punishment of their Jewish victims cemented permanent Arab aggression and rejectionism towards Israel. Yesterday at the UN, making common cause with ideologues, appeasers and tyrants, perfidious Albion continued its betrayal of the Jewish people.

The scene is now set for the US to tackle the reservoir of evil that the UN has become. Not before time. This is one swamp that most urgently needs to be drained.