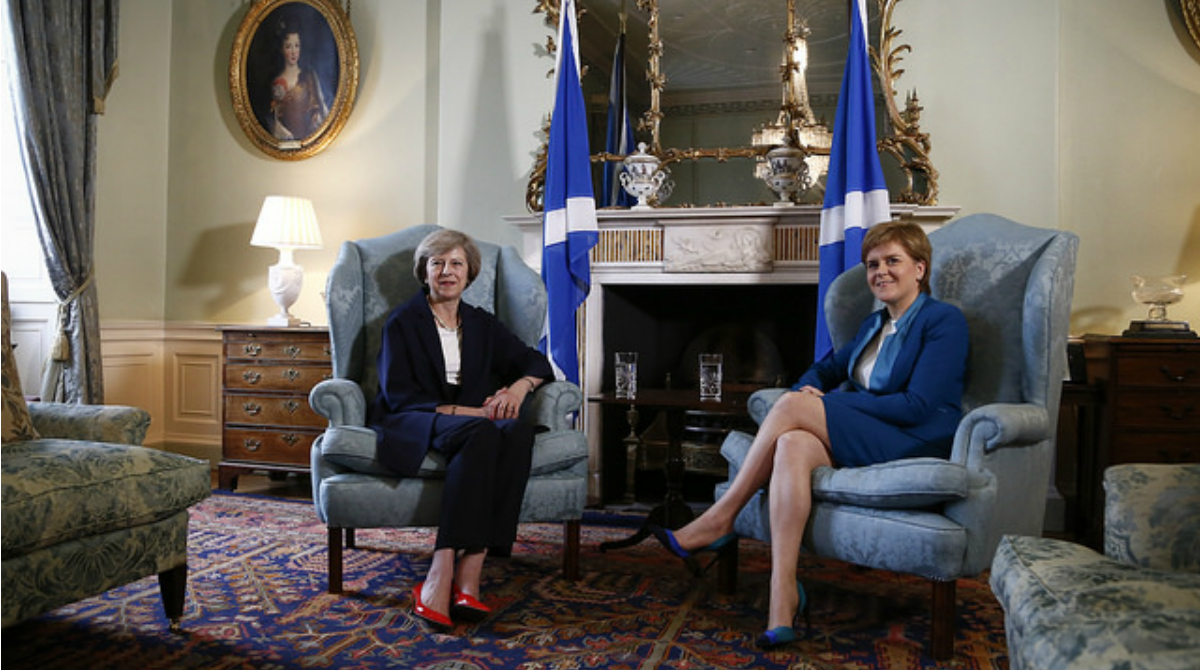 British politics is entering very turbulent waters. Join me here as I discuss whether Prime Minister Theresa May can simultaneously fight EU bureaucrats, Scottish nationalists, Irish republicans and Remainers at Westminster, variously intent on seizing the moment for their agenda, scuppering Brexit or both. A transcript of my remarks follows beneath the video.

The starting gun has been fired for independence in the United Kingdom. No, not independence FOR the UK from the European Union, or Brexit. Although the parliamentary bill enabling the government to start that process cleared its final hurdle last night, and Prime Minister Theresa May was expected today to trigger Article 50 which sets the two-year exit procedure in motion, we’re now told she won’t do that until the end of the month.

The reason for the delay isn’t yet clear. Certainly, today’s news has been dominated by a development which drove that crucial parliamentary vote off the front pages. Scotland’s First Minister and leader of the Scottish National Party Nicola Sturgeon chose yesterday to demand that a second Scotland independence referendum should be held between autumn 2018 and spring 2019 – while the Brexit negotiations will still be going on – and to announce that the Scottish parliament in Holyrood will vote on such a demand next week.

Not surprisingly, she got a very dusty response from 10 Downing Street. Westminster’s approval is needed for a legally binding referendum, and Mrs May’s team made it clear immediately there was no question of allowing that vote to take place before the separation deal with the EU was finalised.

This is hardly surprising, since once the Brexit process gets going the negotiations with the EU are likely to be extremely fraught in Brussels and politically explosive at home. The last thing Mrs May would want is simultaneously to be fighting to keep Scotland in the UK.

Nicola Sturgeon’s time-frame seems to have been crafted to be as damaging and disruptive as possible. It was always obvious therefore that Mrs May would reject it. Ms Sturgeon must have known that. So what exactly is she up to?

The main reason she gave for demanding a second referendum during this period makes no sense at all. She claimed it was to give Scotland “a real choice, when the terms of Brexit are known but before it is too late to choose our own course”.

This is absurd. The terms of Brexit won’t be known until the deal is finally done – and negotiations could well go down to the wire. And why will it then be too late for Scotland to choose its own course? It can vote for independence just as well after the deal is done – indeed, only then will it be able to make a properly informed decision. As the former deputy leader of the Scottish National Party Jim Sillars has observed, Ms Sturgeon’s timetable invites the Scots to vote for a pig in a poke. They wouldn’t have any real idea what exactly they were voting to leave.

Ms Sturgeon appears to be taking an extraordinary gamble. It’s far from clear that the Scots would vote for independence in a second referendum. Public opinion is pretty well split down the middle. With the collapse in the oil price, Scotland’s economic prospects are worse than when the first referendum was held in 2014. More pertinently, the EU won’t even consider a request from Scotland to join until and unless it has actually left the UK – which may leave it marooned outside both the UK and the EU for years. Even more pertinently several EU member states will actively resist Scotland joining, out of fear this would galvanise their own separatist movements.

A second referendum is therefore a terrible risk. So why has Nicola Sturgeon decide to take it?

It’s been reported that, as Mrs May closed off the option of remaining in the single market, Ms Sturgeon saw the opportunity open up of capitalising on Scotland’s fears of a so-called “hard Brexit” which would impose tariff barriers with the EU. She may also be calculating that as negotiations propel the UK towards a bad deal or no deal at all and tempers everywhere rise, opinion in Scotland will progressively harden in favour of independence.

But if the UK secures a good free-trade deal, her strategy will blow up in her face. And even if it’s a bad deal, the prospects for an independent Scotland may still be worse. Above all, if she loses an independence referendum for the second time she will have destroyed Scottish nationalism for the foreseeble future.

The most likely reason she’s taken this gamble is that she’s between a rock and a hard place. If she didn’t now demand the second referendum she’s been threatening for so long, she’d look like a busted flush. Already weakened in Scotland itself, without an overall majority at Holyrood and with her personal approval ratings sliding, she may hope her referendum ploy will lift her out of the political doldrums.

The conclusion therefore is that she may have wrong-footed Mrs May with her timing but Nicola Sturgeon has acted out of weakness and even desperation. On the other hand, losing Scotland is Mrs May’s nightmare. Ms Sturgeon hopes to trap her in a vice between mutinous Remainers on one side and rebellious Scots on the other – and with the EU screwing the vice ever tighter.

Mrs May is about to enter an exceptionally testing period in which she may be embattled on many fronts simultaneously: Brussels, Westminster, Edinburgh and Belfast, where independence noises are also being made. Is she up to it?

I share the doubts. The recent Budget debacle over national insurance for the self-employed has produced the unedifying spectacle of the Prime Minister trying to pretend she’d been blindsided by the proposal, even though it’s inconceivable she wouldn’t have known what the Chancellor was going to announce. If she scuttles for cover like this at home, how is she going to face down the eurocrats of Brussels?

And just why HAS she postponed triggering Article 50? That’s the point of no return, when Britain’s exit from the EU becomes irreversible. Parliament has now given its authority, so why should there be any further delay?

Mrs May is popular in Britain. People like her style. We are only now about to see, however, whether the Prime Minister is a statesman fitted for the momentous task with which she has been entrusted by the British people.