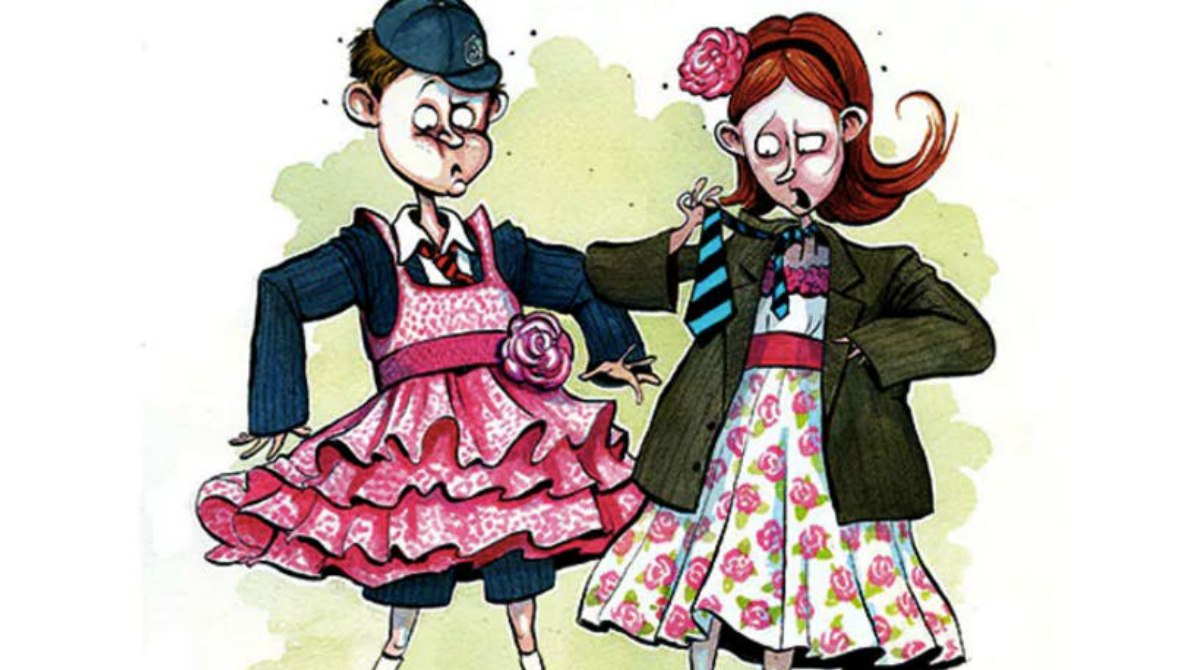 The British government intends to change the law so that adults can alter at will the sex registered on their birth certificates.

At present, a person who wishes to change gender must apply for a Gender Recognition Certificate. This requires a doctor’s diagnosis of gender dysphoria certifying that the individual has spent two years of living in the opposite gender. All that will be needed in future is for a man to say he is now a woman and vice versa for their birth certificate to be changed.
time
Such a birth certificate will thus be a lie. For whether or not the person should be recognised as having changed sex now, he or she was born a girl or a boy. This Conservative government – conservative! – will thus be putting legalised lying onto the statute book.

This is why the Conservative Party has lost its way.

The Spectator has today kindly republished on its Coffee House website the cover story I wrote for it about this issue in January last year. I am therefore also taking the opportunity to republish it below for the interest of those who may have missed it last time round.

Once upon a time, ‘binary’ was a mathematical term. Now it is an insult on a par with ‘racist’, ‘sexist’ or ‘homophobic’, to be deployed as a weapon in our culture wars. The enemy on this particular battleground is anyone who maintains that there are men and there are women, and that the difference between them is fundamental.

This ‘binary’ distinction is accepted as a given by the vast majority of the human race. No matter. It is now being categorised as a form of bigotry. Utterly bizarre? Scoff at your peril. It’s fast becoming an enforceable orthodoxy, with children and young people particularly in the frame for attitude reassignment.

Many didn’t know whether to be amused or bemused when the feminist ideologue Germaine Greer was attacked by other progressives for claiming that transgender men who became women after medical treatment were still men. What started as a baffling skirmish on the wilder shores of victim culture has now turned into something more menacing.

The Commons Women and Equalities Select Committee recently produced a report saying transgender people are being failed. The issue is not just whether they really do change their sex. The crime being committed by society is to insist on any objective evidence for this at all. According to the committee, people should be able to change their gender at will merely by filling in a form. Instead of requiring evidence of sex-change treatment, Britain should adopt the ‘self-declaration’ model now used in Ireland, Malta, Argentina and Denmark. To paraphrase Descartes, ‘I think I am a man/woman/of no sex, therefore I am.’

The committee’s chairwoman, the Tory MP Maria Miller, said there’s no need for gender categories on passports, drivers’ licences or other official forms because gender is irrelevant. ‘We should be looking at ways of trying to strip back talking about gender,’ she says. The Tories are now promising reforms along these lines, and the momentum has been building for some time.

In 2004, Parliament passed the Gender Recognition Act; in 2010, the Equality Act made gender reassignment a protected characteristic; in 2011, the government published its ‘Advancing transgender equality’ action plan.

In short, the political class is obsessed by gender issues. I trust you are, too. Surely you can reel off the differences between trans, intersex, polygender, asexual, gender–neutral and genderqueer? Do keep up. We’re all gender fluid now, no?

No. Gender is not fluid. What is fluid, however, is the language.

The notion that gender can be deconstructed in accordance with ideology started in the 1970s when (ironically, in view of the Greer row) it was promoted by feminists for whom gender was not a biological fact but a social construct. But it’s not. Gender derives from a complex relationship between biological sex and behaviour. And nature and nurture are not easily separable. Some unfortunates feel they are trapped in the wrong gender. Surgery may or may not resolve this confusion. Many who change sex still don’t feel comfortable; tragically, some even commit suicide.

Crucially, however, such people are desperate to make that change. That’s because for trans people gender is certainly not irrelevant but is of all–consuming importance. Yet Miller and her committee would deprive them of the ability to announce their new sexual identity on passports or other official documents.

Is this not, by Miller’s own logic, cruelty to trans people? But of course logic doesn’t come into this. Gender politics is all about subjective feelings. It has nothing to do with fairness or equality. It embodies instead an extreme egalitarianism which holds that any evidence of difference is a form of prejudice.

If people want to identify with either gender or none, no one is allowed to gainsay it. Objective reality crumbles under the supremacy of subjective desire. Those who demur are damned as heartless.

In fact, gender fluidity itself creates victims. Professor Paul McHugh is the former chief psychiatrist at Johns Hopkins hospital in the US. In the 1960s this pioneered sex-reassignment surgery — but subsequently abandoned it because of the problems it left in its wake. Most young boys and girls who seek sex reassignment, McHugh has written, have psychosocial issues and presume that such treatment will resolve them. ‘The grim fact is that most of these youngsters do not find therapists willing to assess and guide them in ways that permit them to work out their conflicts and correct their assumptions. Rather, they and their families find only “gender counsellors” who encourage them in their sexual misassumptions.’

In two states, any doctor who looked into the psychological history of a ‘transgender-ed’ boy or girl in search of a resolvable problem could lose his or her licence to practise medicine.

In line with such suppression of medical freedom, Miller’s committee also wants to dump McHugh’s ‘medicalised approach’. The MPs claim it ‘pathologises trans identities’ and runs ‘contrary to the dignity and personal autonomy’ of trans people. They note that a UK survey found about half of young and a third of adult transgender people said they had attempted suicide. The committee does not suggest this is most likely because of the unbearable mental conflict over their sexual identity. Instead, it blames ‘transphobia’ for driving them to this despair.

Thus Miller and her colleagues do two things: display callous denial of the tragic condition of such unfortunates, and set up the basis for state-mandated coercion.

Their prime target, of course, will be children, whose young minds can be so easily manipulated. Trans and gender issues, says the committee, should be taught in schools as part of personal, social and health education.

We can all predict what will happen. Gender fluidity will be actively promoted as just another lifestyle choice. Under the commendable guise of stopping the minute number of transgender children being bullied, the rest of the class will be bullied into accepting the prescribed orthodoxy — that gender is mutable, and any differentiation in value between behaviour or attitudes is bigoted and prohibited.

The intention is to break down children’s sense of what sex they are and also wipe from their minds any notion of gender norms. In American schools, last November’s Transgender Awareness Month was a festival of such indoctrination. Children were handed out ‘pronoun buttons’, badges which identified their own preferred personal pronouns as specific to any gender they chose or none.

Brighton College, one of Britain’s leading private schools, has abolished distinctions between boys’ and girls’ uniforms. All can now choose between wearing a blazer, trousers and tie or skirt and bolero jacket. The school’s head, Richard Cairns, says he only wants to make his transgender pupils happy. But inviting boys to wear skirts is a dangerous frivolity. Promoting gender fluidity is likely to make children confused or distressed. If a girl prefers to climb trees rather than play with dolls or a boy likes ballet, will they now wonder if they’re really not a girl or a boy at all?

Worse still, something most children grow out of may cause them to become — to use the Miller committee’s own boo-word — pathologised. According to Professor McHugh, prepubescent children who begin imitating the opposite sex are being treated by misguided doctors with puberty-delaying hormones to render later sex-change surgery less onerous — even though such drugs stunt children’s growth and risk causing sterility. These are the very drugs that the Miller committee wants the specialist Tavistock gender clinic to prescribe to children with less delay.

These MPs are turning gender confusion from a health issue into a political statement to be enforced. So of course they also want to turn denying or questioning gender fluidity into a hate crime. Certainly, anyone who attacks or threatens people on account of their gender should be prosecuted. But the committee wants ‘stirring up hatred’ against trans people to become a crime — which would include insulting them by saying they belong to the sex they deny.

The Law Commission didn’t support that, observing that ‘criminalisation might also inhibit discussion of disability and transgender issues and of social attitudes relating to them’.

You bet. The Miller committee wants ‘mandatory national transphobic hate-crime training for police officers and the promotion of third-party reporting’.

Heaven help us — Caroline Dinenage, a junior minister at the Ministry of Justice, meekly agreed to this sinister proposal and confessed the government was ‘very much on a journey’.

Indeed, you could say the West is very much on a journey. From divorce and lone parenthood to gay marriage, what was once regarded as a source of disadvantage or category error has been transformed into a human right. In the process, compassion has turned into oppression.

The Miller committee writes about one of its witnesses who talked about the government’s Advancing Transgender Equality plan: ‘Christie Elan-Cane told us that the plan was, from per [sic] point of view as a non-gendered person, “all plan and no action, because nothing resulted from it”.’

Yes, I also stumbled over what I thought was a typing error; but no, a footnote tells us: ‘Christie Elan-Cane asked us to use the non-gendered pronoun “per”.’ Such supine surrender to this hijack of language, the signature motif of totalitarian political systems, tells you more than anything else what’s in store for us.

Gender cannot be at real risk because it is anchored in an immutable reality. What is on the cards is oppression, socially engineered dysfunction and the loss of individual freedom. And it is so-called Conservative politicians who are helping wave the red flag of revolution.