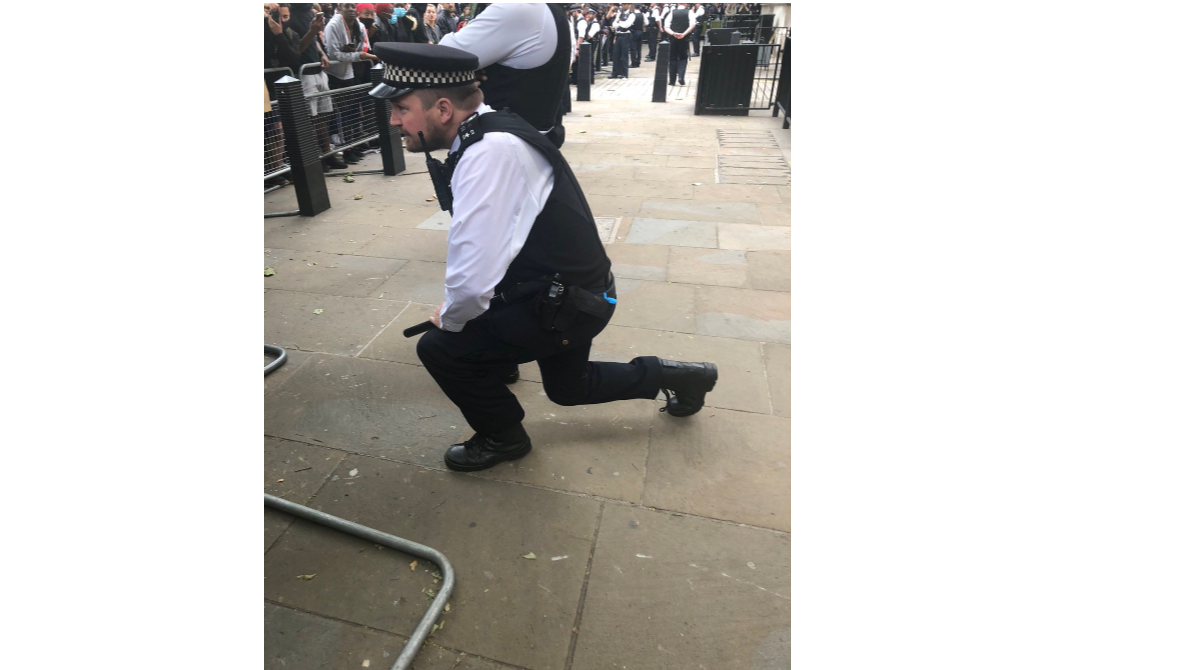 When people in London demonstrating over the death of George Floyd in Minneapolis shouted at police guarding the Downing Street gates “take a knee”, four Metropolitan Police officers meekly got down on one knee as demanded.

Last night, hundreds of people around Britain came out onto the streets at 6pm, in the coordinated demonstration suggested by “Stand Up to Racism” activists, and all sank to one knee.

The death of George Floyd after more than eight minutes pinned down on the ground by a police officer kneeling on his neck was appalling. But what all these Britons were doing in this act of “solidarity” was deeply shocking.

“Taking a knee” is a gesture which was introduced in 2016 by the American football star Colin Kaepernick, who sank to one knee during his country’s national anthem as a protest against what he said was American racism and police brutality. “I am not going to stand up to show pride in a flag for a country that oppresses black people and people of colour,” he said.

“Taking a knee”, which was subsequently widely emulated and became a kind of equivalent to the black power salute, was therefore not merely a statement that the police were racist and brutal. It was a statement that white society as a whole was institutionally racist; and in disrespecting the flag and national anthem, it was a statement that repudiated allegiance to the nation itself.

That is what those hundreds of Britons “taking the knee” were actually identifying themselves with – a grotesque, racially prejudiced libel against the police and the whole of white society, not just in America but in Britain.

In Wolverhampton, councillor Beverly Momenabadi wrote: “I’ve been quietly reflecting on the hurt, pain and oppression that black people have been suffering for so long. Both in the US and here in the UK. But we don’t want words. We don’t want condolences. We don’t want any more deaths. We want justice. We want equality for all. And we will continue to challenge the institutions, the Governments and the abhorrent policies which continue to oppress people”.

Racial prejudice and police brutality certainly occur in Britain and America. But the allegation that the police in these countries along with their wider societies are institutionally racist is a lie.

As Heather MacDonald pointed out in the Wall Street Journal this week, roughly a quarter of fatal police shootings are of African-Americans. But this isn’t surprising, even though they constitute 13 per cent of the population, given the disproportionate number of armed black suspects encountered by the police. In 2018 they made up 53 per cent of known homicide offenders in the US and committed about 60 per cent of robberies.

As for Britain, the claim that the police are “institutionally racist” was a lie when it was first promulgated by the 1999 Macpherson report on the murder of the black teenager Stephen Laurence, and it remains a lie today. Yet it has never been properly called out as a lie by either politicians or police chiefs, who thus abandoned the police service to implode ever since through demoralisation, self-doubt and loss of purpose.

Which is why it was particularly sickening to see those police officers sink to one knee outside Downing Street under pressure from a threatening mob. It wasn’t just that the police should remain impartial at all times and never be seen to identify with any cause. It was also that, by signalling support for the claim that the police and white society are institutionally racist, that gesture by those officers was a sign of professional and civilisational humiliation and surrender.

Various groups have seized the opportunity offered by Floyd’s death to whip up hatred, criminality and insurrection in pursuit of their aim of overturning western society which they claim is incorrigibly bad. The hundreds “taking a knee” on Britain’s streets have duly acted as their useful idiots by falling into line – some raising clenched fists – behind that utterly malign agenda.

These scenes have given rise to the sickening realisation that much of Britain has simply spun off its moral compass.

All too eager to show off to everyone else what nice people they are by identifying with what they have been told is a protest against injustice or oppression, these knee-bobbers have merely advertised their replacement of reason by emotion and their unwitting endorsement of resentment, prejudice and moral bankruptcy.

Over this past ten days or so, we have witnessed the nauseating death of George Floyd, the manipulated nihilism and violence that followed, and now the disgusting endorsement of that agenda and the twisted and hateful falsehoods at its core by so many who have credulously swallowed it all wholesale.

Millions of decent people in the west will be aghast at this further evidence of the steady disintegration of their once-magnificent culture of civilised values. The great question, of course, is whether this desperately sad process can be halted; and if so, how.