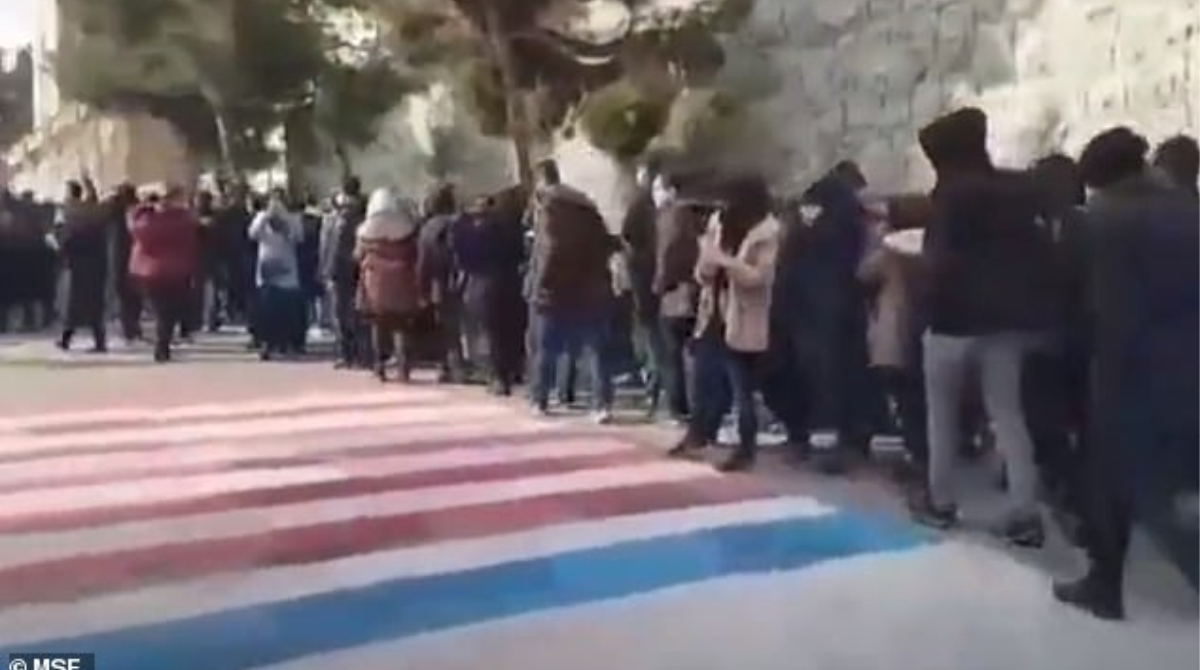 In the US, President Donald Trump and Secretary of State Mike Pompeo have expressed their support for the heroic Iranian protesters who have returned to the streets calling for their ruling tyranny to be brought down.

Trump tweeted: “To the brave, long-suffering people of Iran: I’ve stood with you since the beginning of my presidency, and my administration will continue to stand with you. We are following your protests closely, and are inspired by your courage”.

He followed this with a warning to the Iranian regime that there must not be “another massacre of peaceful protesters, nor an internet shutdown. The world is watching”.

Anyone heard similar full-throated support for the Iranian people against their tyrannical rulers from Britain’s prime minister, Boris Johnson? Or the leaders of France or Germany?

The oppressive, genocidal and jihadi terrorist regime in Tehran is on the ropes. America’s elimination ten days ago of Iran’s diabolical strategic and military mastermind, Qassem Soleimani, was itself a crushing blow from which it will find it hard to recover.

The subsequent downing of the Ukrainian passenger plane by an Iranian surface-to-air missile, causing the deaths of more than 176 people on board and which the regime said on Friday was an accident (powerfully disputed here and by other commentators who say the claim that a panicky Iranian Revolutionary Guards Corps operator mistook a scheduled passenger flight taking off from Tehran airport for an incoming cruise missile just doesn’t stack up) delivered a devastating blow to the prestige of the IRGC and weakened still further the Supreme Leader, Ayatollah Khamenei, to whom it directly answers.

Now the protesters who have endured an estimated 1500 murders and thousands of arrests since their demonstrations started last November, against a regime which has crushed their lives, freedom and economy and prioritised instead foreign terrorism and war-mongering, have taken to the streets again in further astonishing scenes of mass courage.

Galvanised by the (at best) lethal incompetence and outright lies over the downing of the Ukrainian plane, which the regime first claimed was brought down by its own mechanical problems, they are once again risking their lives by massing in large numbers and chanting for the removal of the Supreme Leader, Ayatollah Khamenei. Large-scale protests have erupted across Iran including Tehran, Shiraz, Isfahan, Hemdan and Orumiyeh.

This monstrous regime is now weakened to an unprecedented degree. Suddenly, there’s a real chance that it might be brought down by its own people. It’s therefore crucial that the west supports these protesters to help them keep up this pressure. That’s why Trump and Pompeo sprang to their support, and did so moreover in Farsi.

Yet sickeningly, the EU is poised to undermine this revolt and strengthen the regime. Despite the US introducing new sanctions on Iran last Friday, EU leaders have said they will “spare no efforts” to keep the 2015 nuclear deal alive.

This would not only once again allow Iran to develop a nuclear weapon after only a few years delay, not only ignore the fact that it has said it will no longer respect the limits set on how many centrifuges it can use to enrich uranium to weapons-grade levels in breach of the agreement, but would also restore the flow of money to Iran’s rulers that would enable them to continue oppressing their population and waging war upon the civilised world.

In the UK, which is due to leave the EU at the end of this month, Boris Johnson is trying to face both ways by saying of the Soleimani killing that America had the right to protect its forces and interests in the region while at the same time telling Tehran that Britain still supports rescuing the nuclear deal.

This despite the fact not only that four British nationals were killed in the Ukrainian plane strike but also that, in a violation of international law, the Iranians temporarily arrested the British ambassador to Iran, Rob Macaire, for allegedly directing “radical” actions in the protests. He has tweeted that he had merely attended a memorial ceremony for the victims of the downed airliner and left before this became an an anti-regime demonstration.

It would be despicable and unforgivable for Britain and the EU, whose support for the 2015 Obama-brokered deal hugely helped empower this unconscionable regime, now to weaken the protesters and strengthen their tyrannical rulers still further – at precisely the point at which the possibility has arisen of bringing down a regime which otherwise risks plunging the world into a terrible war.

The protesters have been ripping down mourning posters of Soleimani, chanting that both he and Khamenei were murderers. “They are lying that our enemy is America; our enemy is right here,” they have cried. At a university outside Tehran, they refused to trample upon the American and Israeli flags that had been laid out on the ground but instead stepped respectfully around them, chastising any who stepped on them. (Even though elsewhere some pro-regime thugs predictably burnt the British and Israeli flags, the former was the far more remarkable development.)

Compare all this this with the west’s received opinion about the Soleimani killing: that he was a hero, that Trump was the war criminal and monster, and that the elimination of this supposedly great general had united the Iranian people against America.

You think? According to Saeed Ghasseminejad, senior adviser and financial economist at the Foundation for Defence of Democracies: “This tweet by @realDonaldTrump with more than 100k likes is already the most liked Persian tweet in the history of Twitter. A strong show of support by Iranians for Trump’s Iran policy, something the MSM does not and will not report.”

The people of Iran know Trump is behind them and against the regime which so oppresses them and menaces the civilised world; and they also know that the west’s so-called “liberal progressives” are against them and are instead lined up behind the regime.

This is one of those moments where the division between those who seek to defend civilisation and those who wish to aid its would-be destroyers is being starkly and terrifyingly exposed.