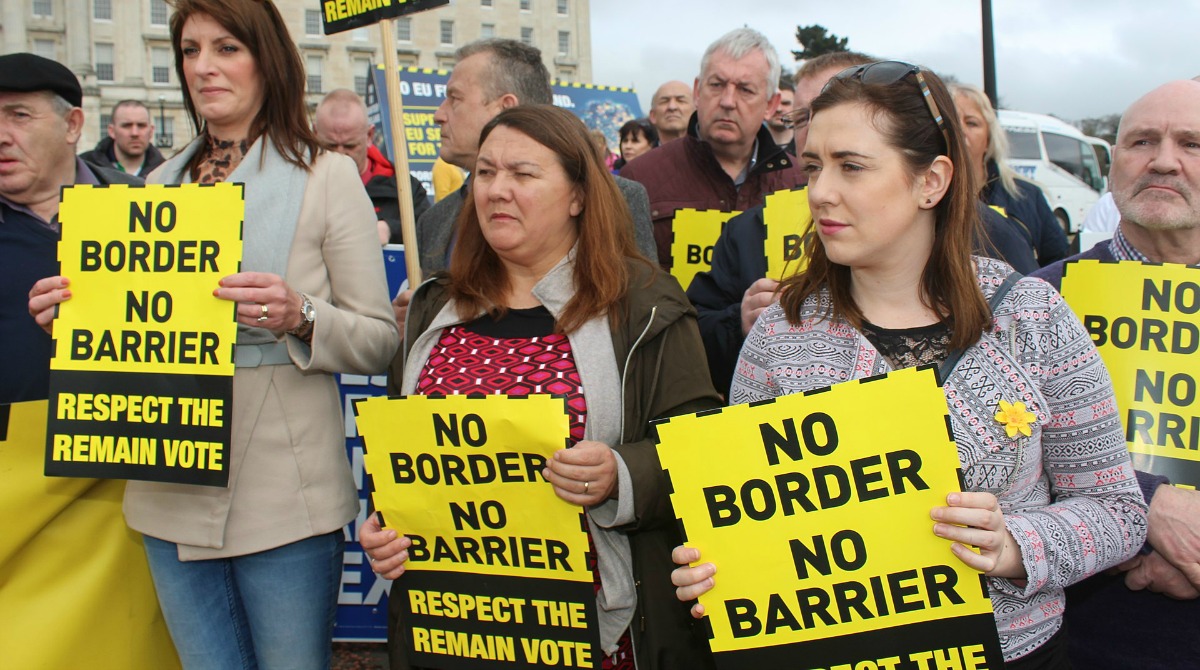 Day after day, the Remainer media hammer away at the apparently insoluble problem of the border between the Irish Republic and Northern Ireland after Brexit.

Day after day, the BBC et al tell us that if there is a “hard” border the Northern Ireland Good Friday peace settlement will collapse; and so there is no alternative to Northern Ireland remaining within the EU single market/customs union to enable uninterrupted passage of goods from south to north. Which of course would mean no Brexit for the rest of the UK either.

This impossible Irish conundrum is deployed as the ultimate argument by Remainers to prove that Brexit is an impossibility wrapped in a delusion representing an insanity. Look at these benighted Brexiteers, they cry, even prepared to countenance renewed murder and mayhem in Northern Ireland to realise the fanatical bigotry of Brexit.

It is a study commissioned by the European Parliament’s Policy Department for Citizens’ Rights and Constitutional Affairs. Written by Lars Karlsson, President of KGH Border Services, former Director of the World Customs Organisation and Deputy Director-General of Swedish Customs, it “provides background on cross-border movement and trade between Northern Ireland and Ireland and identifies international standards and best practices and technologies that can be used too avoid a ‘hard’ border as well as case studies that provide insights into creating a smooth border experience”.

“There have been significant developments around the world in creating bring together international standards and best practices and new technologies to create low friction borders that support that fast and secure movement of persons and goods. Standards and best practices such as domestic and cross-border coordinated border management as well as trusted trader and trusted traveller programs can significantly reduce compliance requirements and make borders almost friction free.

Customs and other border control practices that keep the border open, such as release before clearance, deferred duty payments and clearance away from the border, also help keep the border free of traffic and speed up or even remove the need for processing. Technologies such as automatic number plate recognition, enhanced driver s licenses, barcode scanning and the use of smartphone apps can also have a significant impact by reducing paperwork and allowing pre- or on-arrival release, which can reduce or even eliminate the need to stop or undergo checks.

Many of these measures have been introduced at borders across the world. At both the Norway-Sweden border and the Canada-US border, low friction borders have been created through a focus on sharing of both data and facilities, the creation of electronic environments for trade and travel and the use of modern technologies. Both Australia and New Zealand have also focused on utilising technology, in particular bio-metrics, to speed-up the movement of citizens between their respective countries. In developing a solution for the Irish border, there is an opportunity to develop a friction free border building on international standards and best practices, technology and insights from other jurisdictions.

This report proposes the implementation of a new border solution that serves both sides of the border with maximum predictability, speed and security and with a minimum burden and cost for traders and travellers. It is based on international standards and operational best practices from different parts of the world supported by state-of-the-art technology.

The solution presented here can also be implemented regardless of the legal framework for EU; therefore, the implementation can commence and the solution can be ready to operate with a minimum transition period. In addition, it is also scalable and presents a potential future model for the future movement of persons and goods between the EU and the UK.

… It is possible to implement a Customs and Border solution that meets the requirements of the EU Customs legislation (Union Customs Code) and procedures, with expected post-Brexit volumes of cross-border people and goods, if using a combination of international standards, global best practices and state-of-the-art technology upgraded to a Smart Border 2.0 or similar solution.”

The Telegraph reported a few days ago that Mr Karlsson ‘had been sounded out by European Commission and British officials over a report he wrote setting out proposals for a “smart” border on the island of Ireland after Brexit – bolstering suggestions the technology is likely to form part of the “end state” relationship between the UK and EU regardless of the specifics of a trade deal. “Officials from the commission and British Government have both been in touch with questions about the report’s conclusions,” he said.’”

The report was published last November. Yet in all the intense debate about the Irish border issue, it has barely figured. It has been mentioned only in a few press stories that appear to have surfaced only to be ignored.