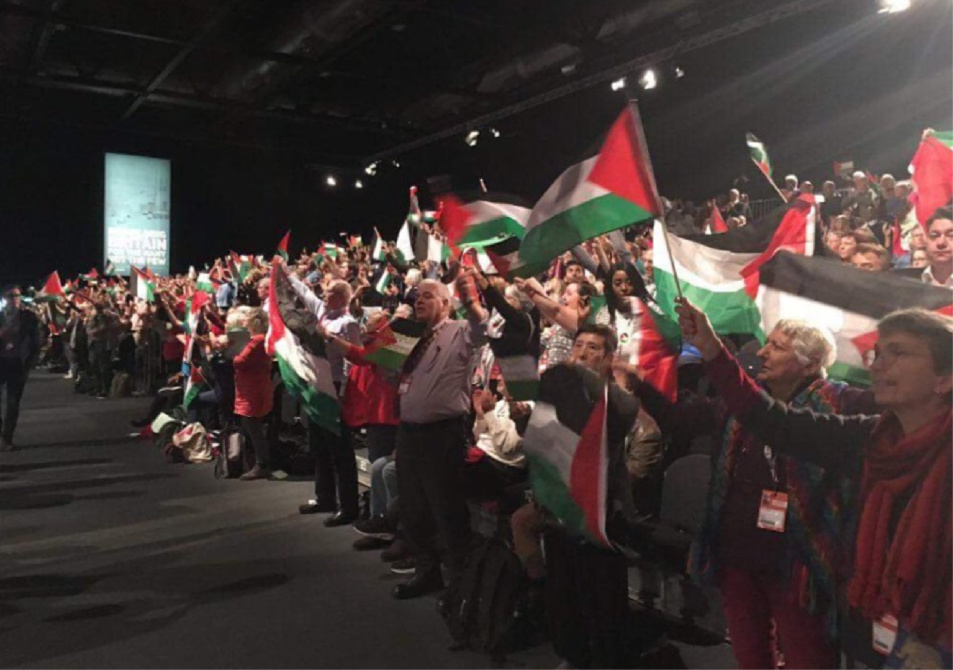 The leader of Britain’s Labour Party, Jeremy Corbyn, has told his party’s annual conference that if he becomes Prime Minister he will immediately recognise a Palestinian state. Immediately. Why? What kind of priority is this for a British Prime Minister?

Labour delegates also voted to condemn Israel’s use of force against violent riots on the Gaza border, urge more UK funding for UNWRA, the UN agency for Palestinians, and back a freeze on British arms sales to Israel. And in a veritable sea of hatred of the Jewish state, they waved Palestinian flags provided for their debate on “Palestine”, which delegates had voted was a priority issue ahead of the NHS, Brexit, social care and welfare.

How come that’s such a priority?

At a fringe meeting Len McCluskey, the Unite trade union leader who previously dismissed the party’s antisemitism scandal as “mood music”, spat his venom against Israel.

Unite represents mainly low-paid British workers in the service sector. Unite is obsessed by hatred of Israel. Why? What possible reason can there be for this? What impact does Israel have on the lives of such workers? None.

All this has made one thing crystal clear. Palestinianism is now the signature cause of the Labour party. Members don’t wave the flag of the potential state of Kurdistan, or Tibet, or identify any other foreign cause to be more important than British domestic issues.

So why has Palestinianism become the cause of causes? The answer is that the obsession is not with the fate of the “Palestinians”, whose lives in fact have been made wretched by their own leaders and the Arab world in general. The obsession is with the Jews.

The foundational aim of Palestinianism is to destroy the state of Israel and deny the historic right of the Jewish people to their homeland. That is what the “Palestinians” constantly proclaim in their speeches, maps and insignia, educational materials and media, and in their rejection of every single attempt to provide them with a “two-state solution” and their resort instead to terrorism and war.

In Judaism the people, the religion and the land are inextricably fused. The signature cause of the Labour party is therefore, in effect and despite the pious espousal of a “two-state solution”, the destruction of Israel and the denial of Judaism itself. This is the core reason why the party is unable to purge itself of the poison of antisemitism.

In a disgusting conference speech, Corbyn further protested “the ongoing denial of justice and rights to the Palestinian people”, declared Labour was “united in condemning the shooting of hundreds of unarmed demonstrators in Gaza by Israeli forces and the passing of Israel’s discriminatory nation-state law” and that “the continuing occupation, the expansion of illegal settlements and the imprisonment of Palestinian children are an outrage”.

No. The true outrage is the distortion, twisted thinking, selective reporting, blood libels and malevolence in those statements, and their consequent incitement to hatred not just of Israel but of its supporters too. The obsession, the falsehoods, the double standards, the singling out of Israel alone for this kind of malice, the denial to the Jewish people alone the right of national self-self-determination in their own historic national homeland (for that is the import of the attack on the “nation-state law”) – this is the “new” antisemitism, the application to Israel of the same techniques of vilification that have been applied to the Jewish people without remission down through the centuries.

In the light of all this, Corbyn’s professed hatred of antisemitism and his acknowledgement of the Jewish people’s “long and terrible history of persecution and genocide” culminating in the Nazi Holocaust was sickening.

This was waving the shroud of the Holocaust to sanitise his onslaught on Israel and Judaism. He ramps up his solidarity with dead Jews in order to mask the agenda of disempowerment, death and destruction embodied in the agenda of Palestinianism that he supports for the living Jews in Israel.

So when he said, “I say this to all in the Jewish community: this party, this movement, will always be implacable campaigners against antisemitism and racism in all its forms. We are your ally”, this seemed like just another obscene Labour hypocrisy.

In pre-Israel Palestine under the British Mandate, the Arabs became Hitler’s legion in the Middle East. The Mufti of Jerusalem, Haj Amin al Husseini, who intended to exterminate the Jews not just in Palestine but throughout the Middle East if Hitler won the war, incited hatred and pogroms against the Jews through fabrications, blood libels and genocidal demonisation – in exactly the same way as does his latter-day cheerleader, the Palestinian Authority president Mahmoud Abbas, the liberation poster-boy of the British Labour movement.

Despite the 1917 Balfour Declaration committing Britain to re-establish the Jewish national home in Palestine, a pledge enshrined in international law though the 1922 Mandate, the British military administration backed by elements in the Colonial Office set out to frustrate this binding obligation.

Officials and officers consciously fomented hostility between Arabs and Jews to make it impossible to recreate the Jewish national home. Deciding that the Arabs were more malleable than the “upstart” Jews, they also set about talking up a mythical pan-Arab claim to Palestine which they knew did not exist. In subsequent Arab pogroms against the returning Jews, British officials provoked and even armed the Arabs and then stood aside as the slaughter took place.

Not surprisingly, the Arabs took this as their cue for yet more violence. “The government is with us” they cried as they carried out their attacks. As anti-Jewish riots continued, the British authorities did nothing to stop the incitement to violence being promulgated month after month, with the Arab press branding the Jews “the human sexual disease” and “a menace to all mankind”.

As the Nazis stepped up their persecution of the Jews in Europe, Arab storm-troopers marched in Palestine openly shouting “Heil Hitler”. Most of the ring-leaders of these riots were on the British government payroll. In 1936, after the British had again ignored Jewish pleas to prevent what was coming, more than 1,990 attacks took place in which some 700 Jews up and down the country were mutilated and slaughtered under the noses of the British Palestine police – whose activities were confined as usual to forcibly disarming the Jews.

In 1947, hours after the UN voted to partition Palestine into a Jewish and an Arab state (with Britain abstaining), the Arabs launched their war to exterminate the Jewish state at birth. Still the British stood by, refusing to allow the Jews to arm themselves while the Arabs attacked them.

Repugnant as this British behaviour was at the time, what is less understood is that it also sent a lasting message to the Arabs – that violence pays, and that in their genocidal war against the Jews of Palestine they were pushing at an open door.

When you look at those Palestinian flags being waved at the Labour party conference, the echoes are unmistakeable.