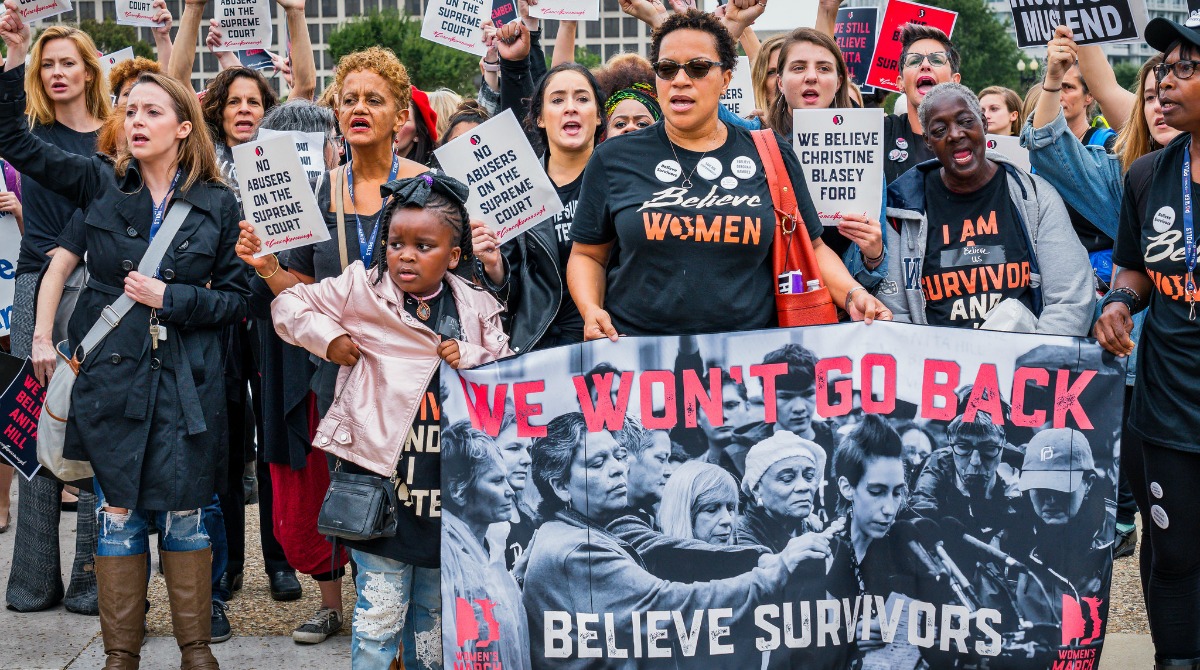 I wrote here that the American Democratic party had become the party of hate. Subsequent events have not only amply confirmed that view but further suggest that the Democrats now pose a real threat to America, in terms of both physical violence and a threat to due process and the US constitution.

“These demonstrators, I’m sure some of them were well-meaning citizens. But many of them were obviously trying to get in our faces, to go to our homes. Basically almost attack us in the halls of the capitol. There was a full-scale effort to intimidate.”

Senator Rand Paul reportedly suffered severe injuries and was hospitalised after being attacked by a Democrat while mowing his own lawn. His wife wrote to Democrat senator Cory Booker demanding that he take back his comment encouraging activists to “get up in the face of some Congresspeople”.

“Preventing someone from moving forward, thrusting your middle finger in their face, screaming vitriol — is this the way to express concern or enact change?” she wrote. “Or does it only incite unstable people to violence, making them feel that assaulting a person is somehow politically justifiable?”

“I would call on you to retract your statement,” Paul said in the letter. “I would call on you to condemn violence, the leaking of elected officials’ personal addresses (our address was leaked from a Senate directory given only to senators), and the intimidation and threats that are being hurled at them and their families.”

She and her family, she said, had “experienced violence and threats of violence at a horrifying level” over the past 18 months.“I now keep a loaded gun by my bed. Our security systems have had to be expanded. I have never felt this way in my life.”

It should be noted that this uproar appears to be driven, at least in part, by a network funded by the billionaire financier George Soros. In the Wall Street Journal, Asra Q Nomani reported on the spreadsheet she had assembled from “following the money” behind the anti-Trump so-called“resistance”:

At least 50 of the largest organizations that participated as “partners” in the Jan. 21, 2017, Women’s March had received grants from Mr. Soros’s Open Society Foundations or similar funds in the “House of Soros,” as his philanthropic empire was once called internally. The number of Soros-backed partners has grown to at least 80. At least 20 of the largest groups that led the Saturday anti-Kavanaugh protests have been Open Society grantees.

On Saturday I also studied the fine print on the signs as protesters waved them defiantly at the Capitol and the high court. They came from a familiar list of Democratic interest groups that have received millions from Mr. Soros: the American Civil Liberties Union, the Leadership Conference on Civil and Human Rights, Planned Parenthood, NARAL Pro-Choice America, the Center for Popular Democracy, Human Rights Campaign and on and on. MoveOn.org, a Democratic organizing and lobbying group founded with Soros money, sent its army of partisan followers regular missives that led them to a Google form to ask for train tickets and places to stay.

Under a ginkgo tree on the East Lawn of the Capitol, Center for Popular Democracy field marshals put protesters through a “training” Saturday morning. “Are you ready to be arrested?” she asks. “Yes!” the crowd shouts, although one woman asks quietly: “For what?”

Nor was Kavanaugh’s confirmation the end of that particular matter. Not content with having undermined America’s judicial appointments procedure by a vicious onslaught on due process and the presumption of innocence, the Democrats have now started to attack the US constitution itself. Because it has not delivered the political result they want, it is now in their sights as apparently not fit for purpose.

Having failed in her disgraceful attempt to destroy Kavanaugh’s Supreme Court candidacy, reputation and professional life through an appalling smear campaign, Senator Dianne Feinstein has now decided that the Supreme Court itself is illegitimate.

“Confirming Brett Kavanaugh in the face of credible allegations of sexual assault that were not thoroughly investigated, and his belligerent, partisan performance in last Thursday’s hearing undermines the legitimacy of the Supreme Court,” she tweeted.

And so, after failing to frustrate an inbuilt conservative majority on the court, Democrats are now planning a brazen new tactic to force it to do their ideological bidding. A campaign has sprung up to change the court’s historic composition in order to pack it with Democrat supporters.

In Vice, Harry Cheadle explained that, even though the court’s previous “swing voter”, the former Justice Anthony Kennedy whose seat Kavanaugh now occupies, occasionally sided with the liberals on the bench, the court had “found room in its judicial philosophy for every right-wing cause under the sun.”

He wrote: “Chatter of impeaching Kavanaugh was floating around, and some have taken to imagining a scenario where the Democrats retake Congress and the White House in 2020 but have their progressive legislation blocked by the Supreme Court. The only way forward then, the argument goes, would be appointing extra justices to ‘pack’ the court—a scheme proposed by Franklin Roosevelt in response to a similarly right-wing Supreme Court in the 30s (FDR’s plan was rejected by Congress, but the court became friendlier to his policies anyway)”.

This is not some one-off, far-left, kooky suggestion. “Pack the court!” is becoming the latest Democrat war-cry. Political scientist David Faris says in a recently published book that Democrats should pack the Supreme Court with as many liberal judges as they can, a tactic he brands the “neutron option for the Supreme Court.”

Indiana Law professor Ian Samuel has tweeted: “‘Pack the courts’ should be a phrase on par with ‘abolish ICE.’” In Huffington Post Zach Carter wrote an article headed “Hey, Democrats: Pack The Court; ‘Eleven Justices’ is the next ‘Abolish ICE’”.

And of course, an electoral college which can deliver a president like Donald J Trump has to be illegitimate, doesn’t it – because it enabled him to become president. And so Alexandria Ocasio-Cortez, a far-left Democrat hoping to represent New York’s 14th congressional District, has declared that the electoral college is a racist American relic that must be abolished.

“It is well past time we eliminate the Electoral College, a shadow of slavery’s power on America today that undermines our nation as a democratic republic,” the 28-year-old Boston University graduate tweeted to her 881,000 followers Saturday afternoon. Ms. Ocasio-Cortez was commenting on a tweet by GQ magazine’s Julia Ioffe, who complained that the Electoral College has helped conservatives get elected.

This is behaviour more fitting for a banana republic.

The Democratic party has allowed itself to be taken over by people who are turning it into a force for violence, disorder and subversion. It is becoming an agency for leftwing totalitarianism, displaying contempt for the rule of law and emerging as an enemy of the US constitution. As it stands, no decent person should vote for it.

Behind it, however, stands the ultra-left in the universities, where education has been hijacked by propaganda and which have been turned from temples of enlightenment into crucibles of hate. And in front of it stands the mainstream media, the Democrats’ brazenly unprincipled weapon of ideological war.

The Kavanaugh confirmation hearings were not just an appalling travesty of justice and decency. They were a key front in America’s increasingly savage and desperately important culture war, whose battle lines are now apparent for all to see.