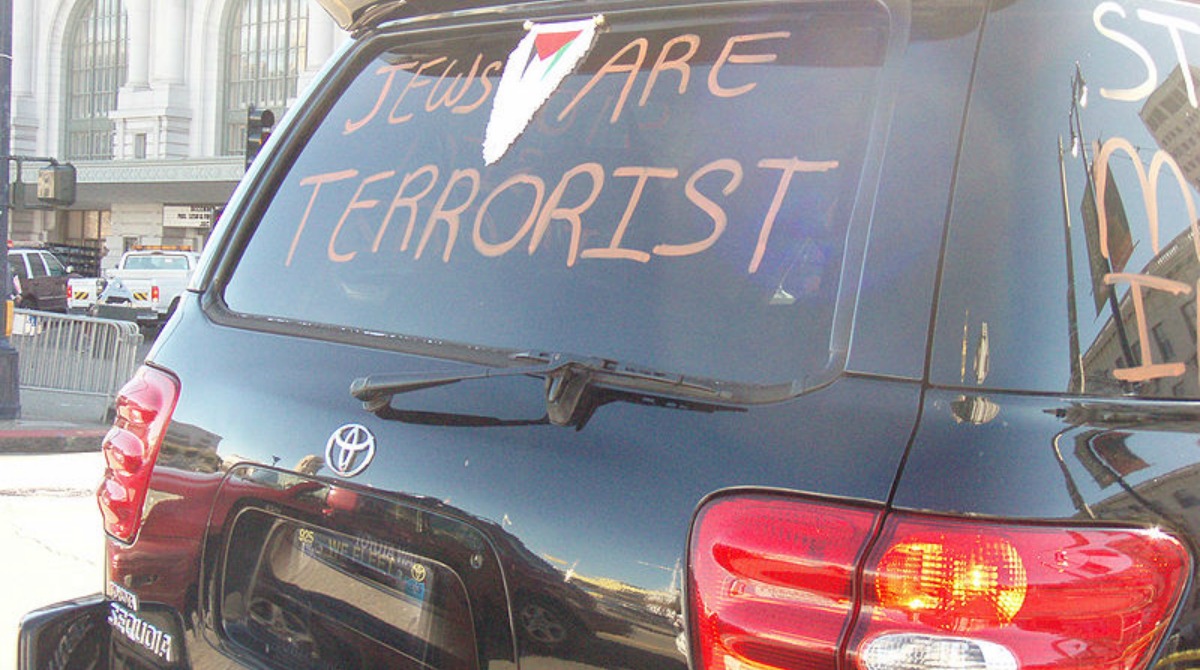 In recent decades, antisemitism has been the prejudice that dare not speak its name. The “Israel apartheid weeks” on campus, the blood libels about Israelis wantonly killing Arab children, the high proportion of attacks on Jews by Muslims – no one was allowed to call this anti-Jewish hatred.

Anyone who did so was accused of Islamophobia, sanitizing the crimes of Israel by waving the shroud of the Holocaust and so on.

Now people are shouting about antisemitism almost every day. Recent events are certainly alarming. Last month, Jewish cemeteries in Philadelphia and near St. Louis, Missouri were vandalized. Hoax bomb threats have forced the evacuation of nearly 100 Jewish community centers and other institutions across America.

No one knows who or what is behind all this. Some people, though, explain it in two words: Donald Trump. They just know it’s the work of white neo-fascists empowered by “dog-whistles” emanating from President Trump, who is said to harbor antisemitic sympathies, and his Svengali, Steve Bannon, who is held to be a white supremacist.

These are ludicrous smears. Trump is one of the most pro-Jewish US presidents ever to be elected. Bannon is also deeply pro-Jew and, far from being a racist or fascist, merely believes in restoring and defending the Judeo-Christian basis of Western national identity.

In any event, attacks on Jewish targets were going on long before Trump’s ascendancy. From 2008 at least, Jewish cemeteries have been desecrated across America. And Jewish students on campus have long run a gauntlet of anti-Jewish hate and intimidation.

In Britain, the Labour Party is convulsed over antisemitic attitudes in its ranks. These are blamed on the party leadership of the far-left Jeremy Corbyn. Yet anti-Jewish double standards, conspiracy theories and demonization of Israel, along with a refusal to admit any of this was antisemitic, have been the left’s default position for years.

What brought anti-antisemitism out of the closet was the murderous Islamist onslaught in 2015 on Jewish targets in Paris, hard on the heels of the carnage at Charlie Hebdo magazine. For the first time, unambiguous anti-Jewish violence had been committed in Europe by Islamists of the kind with whom the left marched shoulder to shoulder against Israel and “Islamophobia.”

The trail in Jewish blood therefore led straight back to the left for having supported, sanitized and incentivized Muslim Jew-hatred. They had no intention, however, of abandoning their Muslim allies. So they needed to lead that trail away from themselves.

The rise of national-identity politics in Britain, Europe and the US provided the perfect cover. Antisemitism became the stick with which to beat up conservatives on the utterly false basis that the resurgence of support for Western national identity was in fact an eruption of fascism, antisemitism and white supremacism.

So all who voted for Trump, or in Britain for Brexit, were said to be in bed with racists, neo-Nazis and Jew-haters; while Trump himself has been subjected to the grotesque, Salem-style accusation that he has not done enough to prove he is not an antisemite.

Most violent antisemitic attacks in Europe have been committed by Muslims. Yet those now shouting about epidemic antisemitism make no mention of Muslim Jew-hatred. Ever.

The situation is further complicated by the professions of support for Jews and Israel by ultra-nationalist European parties, some of which have records of fascism and Jew-hatred.

The Austrian Freedom Party, created in the 1950s by former Nazis, last year sponsored a conference on the “new antisemitism.” Its leader, Heinz-Christian Strache, visited Israel and vowed to do everything he could to oppose anti-Israel boycotts.

In France, Marine Le Pen not only purged antisemites from her Front National party but has declared herself steadfastly pro-Israel. Similar attitudes are being expressed by other far-right parties, such as the Flemish Vlaams Belang, the Sweden Democrats and Russian nationalists.

Some of this may be genuine. In the Netherlands, for example, the anti-Islamist Party for Freedom leader Geert Wilders, who in his youth volunteered on an Israeli moshav, is demonized as a racist, but repeatedly refers to the Jews as role models for Europe.

Much of the rest may be opportunistic repositioning by nationalist parties realizing they can now make common cause against Muslim aggression with terrified and abandoned European Jews.

They also perceive the opportunity provided by the eruption in support for European cultural and national identity after its total abandonment by mainstream politicians. To capitalize upon this, they must detoxify themselves of anti-Jewish attitudes to pass as respectable.

The distinction between racist nationalism and the promotion of legitimate national identity is set to become one of the most fraught issues in Western politics.

Western national identity is in fact essential for freedom and democracy. To call it racist or fascist is ignorant and lazy. It makes enemies out of the true friends of freedom and allies out of its enemies.

There are indeed bad people out there. It is not, however, President Trump who has empowered them, but all those who have demonized the natural and legitimate yearning to belong to something called home.