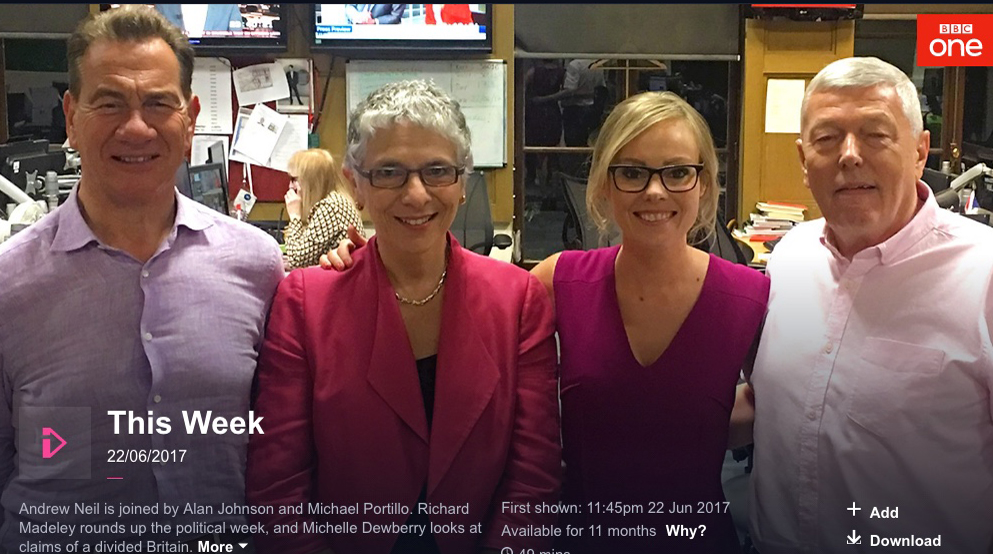 A couple of days ago, I appeared on BBC TV’s This Week show talking about whether the Anglosphere, the shorthand term for the English-speaking world led by Britain and America, was in decline given the ongoing uproar over Brexit and President Trump. You can watch this discussion here.

Since my remarks were very compressed, what follows here is a fuller version of my observations – or what I would have said had I not been confined to such a short space of time.

The Anglosphere has been in decline for the past several decades due to a deep cultural demoralisation. Since the Brexit vote, I have allowed myself a modicum of optimism that this decline might at last be halted and reversed.

The demoralisation of the west dates back to the rise of Nazism and the Second World War. Europe, the crucible of the Enlightenment which had nevertheless descended into barbarism, came to believe that it had to be protected against itself. Its constituent nations, particularly Germany, could never again be trusted with any power.

That despairing certainty was the core belief underpinning the EU project. Fascism, went the thinking, had been created by nationalism. To prevent nationalism – and thus prejudice, fascism and war – you had to emasculate the nation. Trans-national institutions, based on the idea of the brotherhood of man, must henceforth take precedence over national governments, institutions and laws.

Britain threw in its lot with this European project because it too was demoralised after the end of World War Two. Bankrupt and deeply in debt to the US, it had also lost its empire – after which, famously, it couldn’t find a role.

In this vulnerable state, its official and intellectual elites were unable to resist the tide of destructive and dangerous ideas which emerged during the sixties – all of which rested on the same premise that the western nation, along with the values it represented, was innately bad.

These ideas constituted a cultural revolution, which radicals realised was a far better way than Soviet communism to undermine the west. They could transform western society through a “long march through the institutions”, capturing the citadels of the culture such as the universities, the churches, the media and others and subverting from within the west’s core values. Through ideologies such as moral and cultural relativism, feminism and multiculturalism this strategy was carried out to the letter.

All these ideologies substituted power for truth and, embodying in their different ways the ideal of the perfection of the world, suppressed all dissent. As a result, Britain lost its sense of its own national identity and, through membership of the EU, its powers of self-government and democracy.

In America too something very similar was taking place among its intellectual elites. Unlike Britain, a defence was mounted in the US by the churches which held the cultural line over large swathes of the country.

It was nevertheless a losing battle. Paralysed by guilt over its history of racism, and increasingly beleaguered by the accusation that it had caused global damage by throwing its weight around, a more uncertain America retreated from its role as the exporter and protector of western values around the world and after Vietnam lost much of the will to defend itself by military means.

Behind Britain’s Brexit vote lay the people’s desire to “get their country back”. They wanted to reassert the integrity of their nation by regaining control over their own government. They wanted control over their immigration policy, which membership of the EU prevented through its core doctrine of the free movement of people. Laws passed by the UK parliament could be overturned by a foreign court, the European Court of Justice. The people wanted an end to ECJ supremacy. A country which doesn’t control its own laws is not an independent nation.

A similar kind of revolt happened in America. It’s more difficult to see this because Donald Trump is such a divisive figure. Like many others, I have deep reservations about his character and psychological flaws. However, it’s necessary to separate the man from the platform he represents and what brought him to power in such an extraordinary way.

He was elected to “drain the swamp”, to end the nexus of corruption and abuse of process that has come to characterise swathes of American government and to restore instead the primacy of the US constitution and the rule of law. His voters wanted him to also to defend America’s interests against foreign threats and no longer to allow those who attack it to do so with impunity.

They wanted him to reverse the dominant western ideology which holds that war to defend western interests is never justified because the west is not justifiable: that those who attack the west do so because of what the west has done to them and so can never be held to account.

In all the decades of the culture wars in the west, the votes for Brexit and Trump were the first time the liberal universalist orthodoxy had been defeated by the people. The significance of this reversal is being demonstrated by the continuing hysterical reaction of the intellectual and political establishment, in whose moral universe no deviation from their dogma is possible.

Hope for the recovery of the west from its long years of decline lies in this popular revolt within the Anglosphere. It doesn’t lie in Europe, whose history of repeated wars against each other, invasion and tyranny means it has only an imperfect understanding of political freedom and the integrity of the nation.

By contrast, America and Britain – the mother-ship of political liberty and democracy – are the foundation nations of western freedom. But people cannot uphold or defend values they no longer believe in or even understand. They will only fight and ultimately die for a nation to which they feel they belong — for a culture and a national project which they love and which they feel they share.

No-one will ever fight and die for the European Union.

The return of national identity, self-government and cultural pride doesn’t just offer both Britain and America the chance to rescue themselves as great nations. Through the Anglosphere’s leadership of the free world, it also offers the west its one and possibly only chance to prevent itself from going under.

This watershed moment for the Anglosphere has thrown up national leaders who themselves reflect the confusion of the times. They have emerged less because of their innate qualities of statesmanship or intellect and more because of the inadequacy of the alternatives. They may not be able to bear the weight of history that now rests upon their shoulders.

In the UK, the failure of Prime Minister Theresa May to secure a majority government has now cast some doubt that Britain can achieve the clean break that it needs to make with the European Union. In the US, Donald Trump’s presidency is threatened both by the relentless attempt to destroy him that is being mounted from within the very swamp he has pledged to drain, and also by his own innate frailties of character.

With both the Brexit vote and the election of President Trump, the door to the Anglosphere’s future suddenly burst open. It has not yet shut again, but it is swinging heart-stoppingly close to doing so.