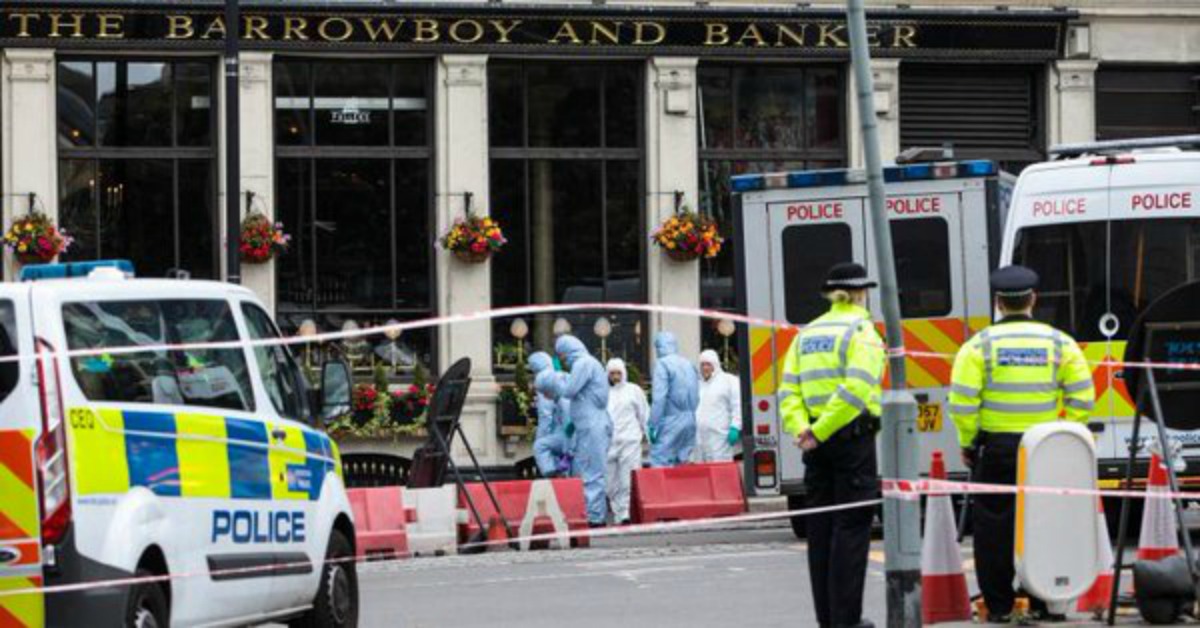 In the wake of the latest Islamist atrocities in Britain, the murderous vehicular rampage on London Bridge and then the frenzied stabbing of people enjoying a Saturday night out in local eateries, the ensuing blame game has merely highlighted the need to start facing up to what it takes to defend a free society.

Join me here for my take on these grievous events and what Britain should now be doing. A transcript follows below the video.

Does the Prime Minister read my column? In yesterday’s Times, I wrote that the chances of Theresa May doing what needs to be done to tackle Islamist extremism and terrorism are slim because of the constraints of human rights law.

Lo and behold: last night Mrs May announced she would take further condign measures, such as making it easier to deport extremists and restricting the movements of terrorism suspects when there was evidence they posed a threat but which wasn’t enough to present to a court.

“If human rights laws get in the way of doing those things,” she said, “we will change those laws to make sure we can do them”.

Well, I’ll believe that when I see it. The hue and cry that she is proposing to “rip up human rights laws”, as the Guardian put it in its usual tendentious manner, has already started.

The former Director of Public Prosecutions and Labour’s shadow Brexit spokesman, Sir Keir Starmer, claimed on the Today programme this morning (0810) that human rights law had never prevented any Islamist extremist from being properly dealt with. Yet in case after case human rights law has prevented deportations from taking place on the grounds that the suspect’s right to family life takes precedence, or the absence of human rights in the country to which he would be deported meant he couldn’t be sent there, and so on.

The Labour leader, Jeremy Corbyn, says would-be terrorists won’t be deterred by restricting our rights at home. Instead he’s been blaming Mrs May for failing to keep Britain safe from terrorist attacks.

Coming from him, this charge is just astounding. For Corbyn and his Labour party colleagues, backed by the judiciary and the civil liberties lobby, opposed just about every single attempt over the years to beef up security on the grounds that these measures supposedly eroded fundamental human rights. The human rights, that is, of the extremists and terrorists rather than their victims’ right to life and safety.

Faced with the courts’ refusal to deport, the government wanted to lock upon foreign terror suspects. Faced with protests that such detention without trial breached suspects’ human rights, the government introduced control orders. Face with protests that control orders breached suspects’ human rights, the government introduced the deeply inadequate T-PIM restrictions. Yet despite having helped emasculate, cripple and paralyse Britain’s security, the Corbyn Labour party has the gall to pose, on the eve of the general election, as the guardians of public safety.

In the wake of the recent atrocities in London and Manchester there are indeed legitimate and necessary questions to be asked about intelligence and policing mistakes. We’ve learned, for example, that some of these terrorists were on the security radar for a while but then dropped off.

But the police and security service have been foiling plot after Islamist plot: five over the last three months, in addition to the three attacks that tragically did succeed during this period. Maybe there are just too many Islamists in Britain nowadays to cope with. MI5 is monitoring no fewer than 3,500 homegrown terrorist suspects. So it’s not surprising that Britain’s top counter-terrorism police officer, Mark Rowley, says Britain needs to radically rethink its strategy because the terrorism threat is now at a “completely different” level of danger.

But any such new strategy will also fail unless basic assumptions change. Because the elephant is still in the room. Even now, with Theresa May saying “enough is enough” after the London Bridge attack, Britain is still refusing to identify correctly the threat that has already claimed so many lives.

These attackers are not “evil losers” or “sick cowards”, as some have described them. They are not nihilists or psychiatric cases or lone wolves. They are devout and ecstatic Muslim fanatics who are waging a war of religion against us.

Mrs May correctly referred to “Islamist” terrorism. Yet she also said this was a “perversion of Islam”. How can it be a “perversion” when it is solidly rooted in religious texts and theological doctrine validated and endorsed by the world’s most powerful Islamic authorities?

In an article in The Times, the Communities Secretary Sajid Javid tied himself up in knots. He rightly said it wasn’t enough for Muslims merely to condemn terror attacks; they must ask themselves “searching questions” and issue challenges.

Yet he also said the perpetrators were not “true Muslims” and it was right to say the attacks were “nothing to do with Islam”. Well if that’s really the case then why should Muslims need to do anything at all?

The west views Islam through its own cultural prism which equates religion with spirituality. The problem is that Islam is as much a political ideology as a source of spiritual guidance.

In 2010 a German study, which involved intensive questioning of 45,000 Muslim teenagers from 61 towns and regions across the country, found that the more religious they were the more likely they were to become violent.

In Australia Sheikh Mohammad Tawhidi, a Shia Muslim cleric who campaigns against Sunni extremism, has said: “The scriptures are exactly what is pushing these people to behead the infidel. Our books teach the beheading of people.”

Of course, millions of Muslims don’t subscribe to any of this. Some are merely cultural Muslims who observe no religious practices. Some, such as the Sufis or the Ahmadiyya sect, are pious Muslims who are truly peaceful (and are themselves victims of the Islamists).

But political, aggressive, jihadi Islam, constrained for so long by both the Ottoman empire and western colonialism, is now dominant once again in the Muslim world.

Which is why in 2015 Egypt’s President Abdel Fattah al Sisi remarkably told the imams of al Azhar university in Cairo – the epicentre of Islamic doctrinal edicts – that Islam’s corpus of sacred texts was “antagonising the entire world”, that it was “impossible” for 1.6 billion Muslims to “want to kill the rest of the world’s inhabitants” and so Islam had to have a “religious revolution”.

We should be promoting and defending such Muslim reformers in the desperate hope that they succeed. Instead we knock the ground from under their feet by saying Islamist attacks have nothing to do with Islam.

Until and unless Islam is reformed, we need to treat its practices on a scale ranging from extreme caution to outlawing them altogether.

Mrs May said we need to make people understand that our “pluralistic British values” were “superior to anything offered by the preachers and supporters of hatred”.

The problem is, though, that Islamists believe their values represent the literal word of God. So to them, no other values can possibly be superior. As a result, you can no more deradicalise them than you could have deradicalised the priests of the Inquisition.

We must require Muslims to take responsibility for the actions of all in their community. A poll of British Muslims last year found that nearly a quarter wanted sharia to replace British law in areas with large Muslim populations.

Four per cent – equivalent to more than 100,000 British Muslims — said they were sympathetic to suicide bombers fighting “injustice”. Only one in three would report to the police someone supporting terrorism in Syria.

In other words, we need to see jihadi Islam as at the extreme end of a continuum of beliefs which are themselves incompatible with British society.

So we shouldn’t just be stopping people coming back to Britain from Syria or Libya, or detaining terrorist suspects through control orders. We should also be closing down radical mosques, deporting those born in other countries who are involved in extremism, stopping foreign funding for Muslim institutions and banning the Muslim Brotherhood.

We should also outlaw sharia courts because, since sharia does not accept the superior authority of secular legislation, it inescapably undermines the core British value of one law for all.

The message should be that British Muslims are welcome citizens but on the same basis as everyone else: that they subscribe to the binding nature of foundational British laws and values. If not, they will be treated as subversives.

Subversion is the attempt to undermine and overthrow our free society. But the very concept of subversion has become identified with a suppression of free speech. The website of MI5 states:

“During much of the 20th century, subversion was a major concern for MI5. This threat diminished sharply following the end of the Cold War. We no longer undertake counter-subversion work, and would only resume doing so if our monitoring of emerging threats suggested an increase in the subversive threat”.

But the Islamic jihad aims to overthrow and conquer western society through both violence and cultural takeover. The Muslim Brotherhood has a stated programme of infiltrating western institutions to achieve that end. I’d say that represented a pretty major increase in the subversive threat, wouldn’t you? Isn’t it time the government banned the Muslim Brotherhood from Britain? Isn’t it time MI5 woke up from its politically-correct torpor to bring counter-subversion back from exile?

As I’ve said, though, any such measures will be opposed with inevitable claims that they will “cause social division” or “destroy British values”. Such protests are already being made.

Jihadi terrorists, however, are not trying to divide us, destroy our values or stop the general election. They are trying to kill us and conquer us.

If it is to defend itself, a liberal society may need to adopt illiberal measures. If we don’t do so now, we’ll be forced to eventually. The only question is how many will have to die before that happens.