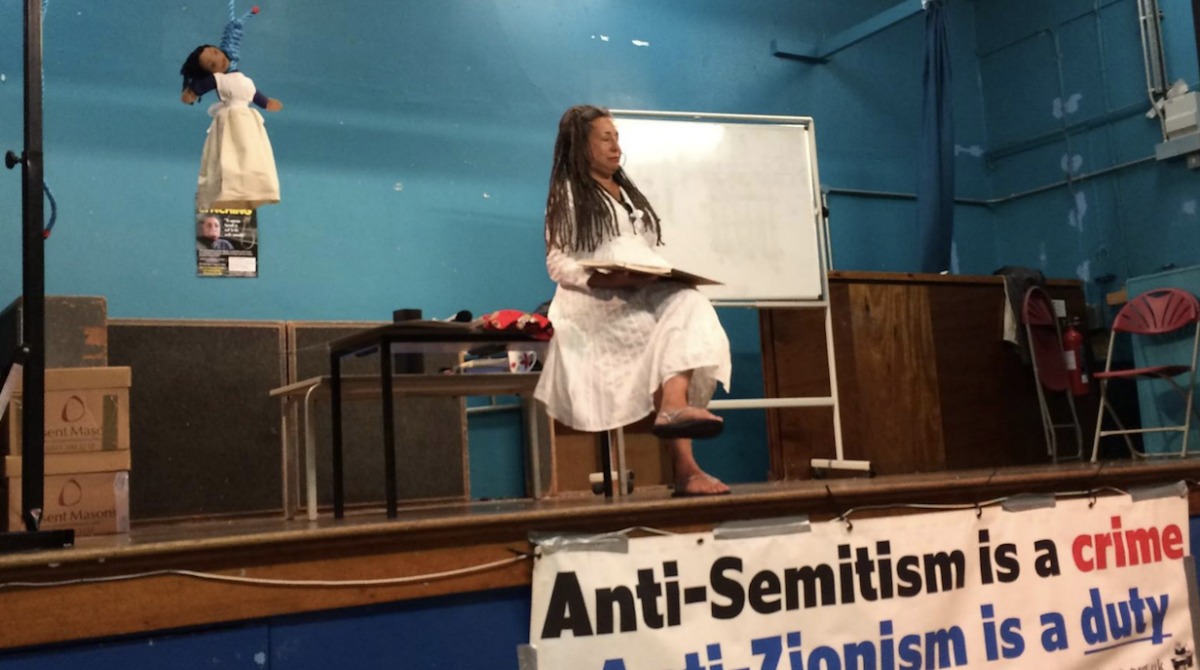 What happens to someone if they’re lynched? They’re set upon by a bunch of thugs and and murdered. Do you think someone who’s been lynched will then turn up on stage in their own show at the Edinburgh Festival Fringe? No, neither do I.

Well here’s a strange thing then. Jackie Walker, who should have been thrown out of the Labour Party over vile remarks about Israel and the Jews but wasn’t thrown out after all, has been appearing at the Edinburgh Fringe in a one-woman show called The Lynching, complete with an effigy of herself hanging from a rope, to justify her remarks and claim that she has been the victim of, ahem, a lynching over making them.

Walker was suspended from the Labour Party last May after writing on Facebook that “many Jews were the chief financiers of the sugar and slave trade,” and so were implicated in perpetrating “the African holocaust” in which “millions more Africans were killed” than in the Shoah. Asking “What debt do we owe the Jews?” she implied that Jews exploited their presumed victimhood in order to perpetrate atrocities against the Palestinians.

Following an internal party investigation, Walker was rapped over the knuckles for causing offence, cleared of antisemitism, hailed as an anti-racist and readmitted to the party by the end of the month. She was then suspended again after she (wrongly) criticised Holocaust Memorial Day for not being open to all who experienced a holocaust, questioned why Jewish schools needed particular security to protect themselves from possible attack and said the issue of antisemitism in the Labour Party had been greatly exaggerated. She was stripped of her role as vice-chairman of the Momentum revolutionary Labour caucus but remained a member of its committee – and of the party.

On the Edinburgh stage, according to the account on the Jewish Chronicle website, she claimed she was neither anti-Jew nor anti-Israel. Her only error in what she said about the slave trade, she averred, was not to use the qualifier that “many Jews, my ancestors too” were (merely) ‘AMONGST’ the chief financiers of the slave trade, because that is a fact. You can read it in the history books …”

But “many” Jews were not “amongst” among the chief financiers of the slave trade. This smear of major or majority Jewish control of the slave trade has been circulated in the US for some years by black power activists and white supremacists. Some Jews were involved in the slave trade, but in far smaller numbers than non-Jews among the Portuguese, Dutch, English and French, Arabs or Africans themselves.

The key fact about Jackie Walker, however, which has merely been reinforced by her Edinburgh travesty, is that she is troublingly obsessed by Israel and the Jews. In any normal universe, such a person would be treated as a (truly) fringe wacko of repulsive views and ignored. Instead, she is lionised. At Edinburgh she received a standing ovation (ok, there were only about 30 people in the audience, but still) with a banner fixed to the front of the stage reading: “Anti-Semitism is a crime. Anti-Zionism is a duty”.

Across the Atlantic a not dissimilar scene was being enacted by the far left Democratic Socialists of America (DSA) at a convention in Chicago last Saturday. That passed a BDS motion, with 90 percent approval of the 697 delegates from 49 states, to wild applause while participants chanted “From the river to the sea, Palestine will be free”. In other words they were chanting their support for the extermination of Israel. This is, of course, what the BDS movement is all about.

You can watch that horrible scene here.

FROM THE RIVER TO THE SEA PALESTINE WILL BE FREE @DemSocialists pic.twitter.com/F7IBFPHTLr

As with the British Labour Party’s Jew-baiting and Israel-bashing bigots, the issue that should cause such concern is the tacit or overt support for such views – or at the very least, the conspicuous failure to confront them.

The DSA claim that they now have about 25,000 dues-paying members nationwide, up from 8,000 in recent years. A similar rapid increase is true of Labour’s far-left Momentum caucus. The real problem, however, is the failure by the Labour Party to kick Momentum out, and the silence of the Democratic party in the US over the DSA spectacle – for even though the DSA is a separate organisation, this is the general direction in which the Democratic party itself has gone.

The deputy chairman of the Democratic National Committee Keith Ellison, who has been associated in the past with the virulently anti-Jewish Nation of Islam, has made a number of questionable remarks including recorded comments at a 2010 private fundraiser in which he said that American foreign policy was “governed” by Israeli interests.

In other words, both Jackie Walker in Britain and the DSA in America are holding a mirror up to the so-called moderate left. Like Caliban in The Tempest, those self-described centrists may be recoiling from what they see in that glass – but it’s their own reflection from which they are flinching.