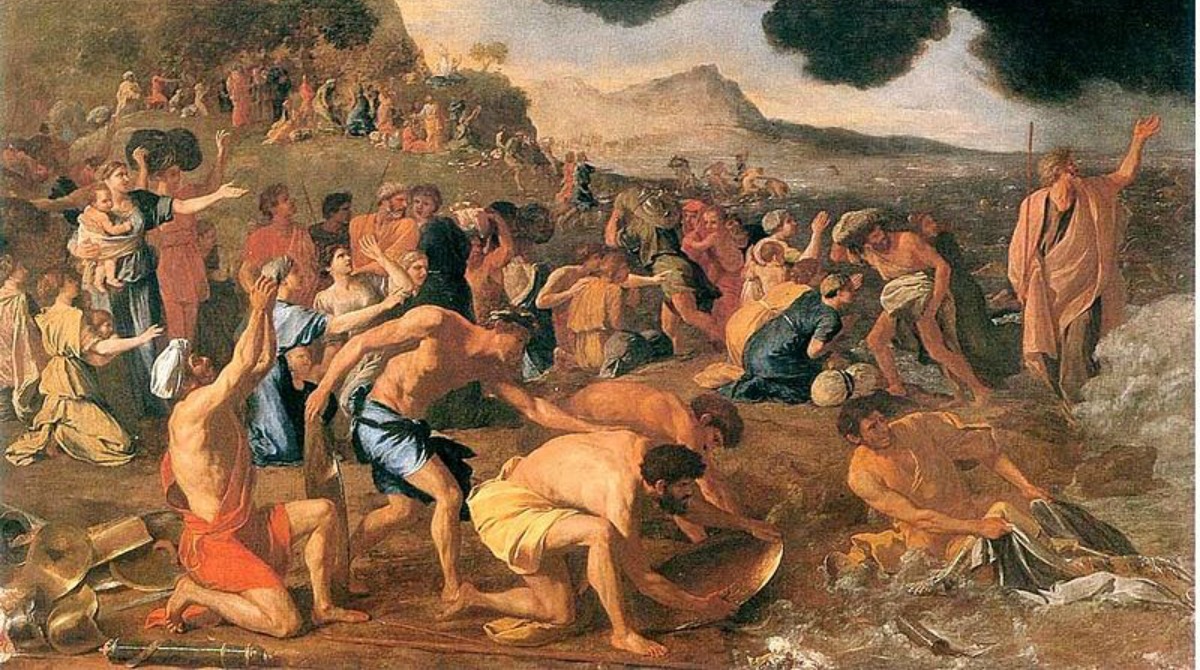 At the festival of Passover, which Jews are about to celebrate, the story is recounted of how the children of Israel managed to redeem themselves from slavery through their miraculous crossing of the Red Sea in which their Egyptian pursuers proceeded to drown.

Plunging into the sea was a supreme act of collective faith by the escaping Israelites, involving extraordinary courage and requiring an equally crucial act of leadership. These three factors are in conspicuously short supply in the west today.

In Britain, the stalled and sabotaged Brexit process irresistibly calls to mind the Biblical scene when the newly-escaped Hebrew slaves berate Moses for leading them into the desert apparently to die of starvation. We would rather still be slaves, they wail, sustained by the fleshpots of Egypt.

Despite the British people having voted in the 2016 referendum for freedom as an independent nation, the British parliament is convinced they will all die in the desert outside the EU, within which it is determined they must stay.

So currently, it’s as if Britain’s leaders have drawn back in terror at the shores of the Red Sea and, fatally pausing to enable the Pharaohs of Brussels to catch up with them, intend to cause the people to be re-enslaved against their will.

This is why, for those who think Brexit is all about the freedom to be a sovereign nation once again, the current impasse is so agonising and unbearable.

Yet over this and other issues, diaspora Jews tend to be on the wrong side of the freedom argument. Most British Jews want to remain in the EU. They’re mostly still attached to the fleshpots of slavery. Why?

To choose freedom, you have to have the courage to take risks. The diaspora experience has made many Jews timid, especially those for whom secularism has eroded their religious faith. For them, the cultural status quo appears to offer protection from harm because it is promoted by the most powerful.

This means they blind themselves to the risks to themselves posed by that very same status quo and its powerful avatars. So they may come to regard their friends as enemies and their enemies as friends.

This disastrous confusion is on cruel display in the Jewish community in both Britain and America.

In Britain recently a Conservative MP, Suella Braverman, observed that conservatives were engaged in “a battle against cultural Marxism, where banning things is becoming de rigueur; where freedom of speech is becoming a taboo; where our universities, quintessential institutions of liberalism, are being shrouded in censorship and a culture of no-platforming.”

Her words produced uproar, led by the British Jewish community. The Board of Deputies objected on the grounds that “the term ‘cultural Marxist’ has a history as an antisemitic trope.”

This was an appalling smear. For Suella Braverman, the daughter of immigrants from Kenya and Goa and whose husband is Jewish, has the warmest feelings towards the Jewish people. And “cultural Marxism” is a term that’s been widely used for decades to describe the actual agenda of revolutionary socialists to destroy western civilisation by infiltrating and subverting its culture from within.

After meeting Braverman, the Board said it realised she was “clearly a good friend of the Jewish community” and “did not intentionally use antisemitic language”.

This was wholly inadequate. Braverman deserved an abject apology, and the term was in no way antisemitic. But the Board seemed to assume that it must be so, purely because some white supremacists and neo-Nazis also use it to highlight the Jewish origins of leading supporters of this agenda.

The assumption that the term is thus intrinsically bigoted is rooted in turn in the shallow and ignorant belief by many diaspora Jews that the main threat of antisemitism comes from white supremacists and neo-Nazis.

But the threat posed by white supremacists, although real and growing, has been grossly exaggerated by left-wingers.

In America, as the conservative commentator Candace Owens recently told the House Judiciary Committee’s tendentiously-named hearing into “hate crimes and the rise of white nationalism”: “White supremacy, racism, white nationalism, words that once held real meaning, have now become nothing more than election strategies”. The aim of using this language, she said, was “to scare blacks, Hispanics, gays and Muslims, helping [Democrats] censor dissenting opinions … helping them regain control”.

Indeed, these terms are now used as an all-purpose smear against decent conservatives who are being lumped together with white supremacists under the labels of “far right”, “alt-right” and “Islamophobes”.

Many Diaspora Jews are on the wrong side of the Islamophobia issue too. Grotesquely, British Jews equate it with antisemitism. This is to fall for the propaganda aimed at suffocating the defence of freedom. For while some people are indeed irrationally prejudiced against Muslims, the term Islamophobia was coined to suppress rational, legitimate and necessary acknowledgment of the dangers within the Islamic world.

Disproportionate numbers of Muslims are alarmingly bigoted towards Jews. Yet to talk about this threat to Jews from within the Muslim community is to be called Islamophobic – even by Jews.

In the US the Democrat Speaker of the House, Nancy Pelosi, has denied there is any any antisemitism in the Democratic party. This is nothing other than a brazen attempt to whitewash the antisemitic tropes promoted by prominent Muslims in her party.

Minnesota Rep. Ilhan Omar, for example, has claimed Jewish money is used to buy influence over American policy and has accused Israel of “evil” and of “hypnotising the world”. Michigan Rep. Rashida Tlaib said Senate Republicans who opposed the Israel boycott “forgot what country they represent,” wrapped herself in the Palestinian flag to celebrate her election victory, and embraced at her inauguration a Hezbollah supporter who openly calls for Israel’s destruction.

In the face of all this, America’s Jewish leaders are largely and disgracefully silent. Most of them, that is, except the head of the Zionist Organisation of America, Mort Klein, who tells it as it is.

Sitting alongside Owens at the same judiciary committee hearing, Klein called for the removal of Omar and Tlaib from their committees. And he went much further.

While acknowledging the dangers of white nationalism, Klein identified the major issue threatening violence against Jews and all Americans as “Muslim antisemitism, which is strengthened by significant institutional support, and is becoming mainstream”.

He pointed to statistics showing that among American Muslims antisemitism was running at more than double the rate among than people of other faiths and none, and four times as much in parts of Europe. “It’s always about the Muslims and left attacking, verbally abusing, and threatening Jewish and pro-Israel students”, he said. And he also blamed institutional support for Jew-hatred by leading imams.

In a New York meeting a few days ago, Klein spoke further about the growing antisemitism from left-wing Muslims in Congress and how this is largely ignored not only by government officials and the media but also by the Jewish community.

In the current climate of intimidation, character assassination and cultural conformity, these are the words of an extremely brave man. He shames the craven Jewish community by speaking plain truths which others, including many diaspora Jewish leaders, seek all too successfully to suppress.

The epidemic of antisemitism and the twisting of the western mind are part of the great battle under way over the survival of western civilisation. It will require all our courage to fight for what’s right and true.

Personally, I shall be spending Passover in Israel, where the fight for freedom is in the very DNA of the people who have to defend it with their lives every day.

Have a good one.