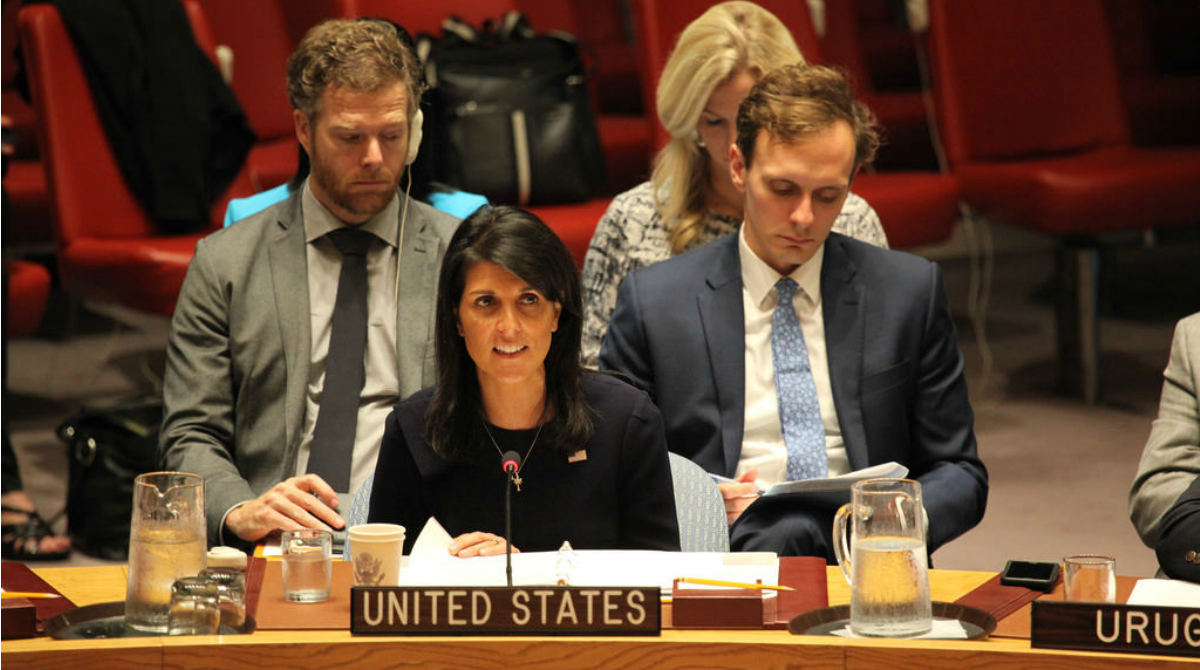 The sudden announcement of Nikki Haley’s resignation from her post as America’s ambassador to the UN at the end of the year has dismayed Israel’s supporters, and with good reason.

Her willingness to call out the despots and tyrants who have turned the UN into a theater of bigotry, injustice and hypocrisy against Israel has been an object lesson in principled and muscular diplomacy which displayed both high skill and charm.

In a universe of western appeasers, she displayed something which that world has all but lost: the moral courage to grasp that evil cannot be accommodated, but has to be confronted and defeated.

Now, though, the US needs to take its strategy of holding the UN to account onto a higher level. Haley gave the UN a regular kicking over its manifold failings. Yet the UN remains intact as a grotesque repudiation of its founding ideals.

Yes, the US quit the UN Human Rights Council. Yet that remains a travesty of its name, comprising some of the world’s major human rights violators, such as the Democratic Republic of the Congo, Cote d’Ivoire, Angola, Qatar and Venezuela.

The single-minded persecution of Israel by the UNHRC should have disqualified it years ago. As Anne Bayefsky of Human Rights Voices has observed, it reserves one permanent agenda item for condemning Israel alone.

The council has adopted more resolutions slamming Israel, and held more emergency special sessions on it, than any other country on earth – including Syria, where at least 500,000 have died and up to 12 million people have been displaced.

The UN’s Educational, Scientific and Cultural Organisation (UNESCO) vitiates its own cultural remit by attempting to write the Jews out of their own history in Jerusalem and other ancient Jewish sites.

In 2016, it adopted a resolution obliterating any Jewish historical ties to the Temple Mount and Western Wall area in Jerusalem, referring to them instead by their Arab names. This, despite the fact that Temple Mount is the holiest site in Judaism and predates the founding of Islam by hundreds of years.

This week, UNESCO passed resolutions sponsored by Jordan, Lebanon, Egypt, Oman, Qatar, Sudan and Morocco stating that the Cave of the Patriarchs in Hebron and Rachel’s Tomb in Bethlehem were both “an integral part of the Occupied Palestinian Territories” – in flagrant denial of law and history, and the sacred nature of these places for Jews as the supposed burial sites of Judaism’s foundational ancestors.

Then there’s UNWRA’s unique designation of Palestinian refugee status as inheritable, a status designed to deploy these unfortunate Arabs in perpetuity as weapons of annihilation against the State of Israel. And let’s not overlook the UN’s own UNWRA schools, which provide curricula indoctrinating Arab schoolchildren into hatred of Israel and the Jewish people.

The UN’s gross failings are by no means confined to its hatred of Israel. In Turkey, a Saudi dissident journalist, Jamal Khashoggi, has disappeared after entering the Saudi consulate in Istanbul to obtain documents relating to his marriage. According to the Turks, the Saudis murdered him, butchered his body and smuggled out the remains. What are the chances of the UNHRC investigating his fate? Zero: Saudi Arabia is a member.

By every possible standard, the UN has conspicuously failed to live up to its own objectives of maintaining global peace and security. It has failed to keep peace in the world, failed to stop global conflicts, failed to halt the carnage in Syria. It has done nothing to prevent Islamic jihadi aggression, nothing to halt the horrific mass murder of Christians in Africa and elsewhere in the developing world, nothing to stop the murder of opposition politicians and extinction of human rights in country after country.

Instead, the overtly anti-American and anti-Israel UN provides a rhetorical shield and effective justification and incitement for terrorism, tyranny and oppression.

The problem lies in the very idea of the UN itself. When it was founded, it was a very different animal in a very different world. In 1945, some 51 countries signed its charter. Now there are 193 member states.

Everything changed with the arrival of the non-aligned nations. This bloc of countries, mainly from Asia and Africa, felt the west had dominated the UN for too long. Their numbers enabled them to dominate it instead and suffuse it with a poisonous, racist ideology equating their oppression under colonialism, imperialism and neo-colonialism with the west.

Their arrival turned the UN into an intrinsically anti-western body. Yet, the pathologically guilt-ridden west persists in regarding it as a dispassionate and moral arbiter of global peace and security whose decisions have the authority of holy writ.

The Trump administration has broken with all that. The US has withdrawn from UNESCO and the UNHRC; Israel is set to withdraw from UNESCO at the end of this year.

This is not enough. The UN itself has to be effectively neutralized, deprived of its power to hurt America and Israel and promote evil in the world.

On the American Thinker website an anonymous army officer outlined how this might be done. The US should steadily withdraw its funding from the UN. It should demand changes to the permanent membership of the Security Council – for example, by getting rid of France, no longer a world power, and bringing in India instead.

In addition, he suggested, the US should clog the schedules of all UN bodies on which it sits with resolutions that would not only divide the membership, but also force them to address awkward questions. For example, resolutions condemning Israeli settlements should be followed up by resolutions on New Zealand’s historically genocidal policies towards the Maoris, Russia’s military adventures in Ukraine and Georgia, Britain’s colonial history, Venezuela’s economic policies and China’s occupation of Tibet.

You get the general idea. Impossible, you think, since the UN is an essential part of the world order? But that world order is bust; and the UN has helped bring it to this pass.

And as for impossible, did anyone ever imagine in their wildest dreams that the president of the United States would be one Donald J. Trump? Desperate times sometimes require desperate measures.