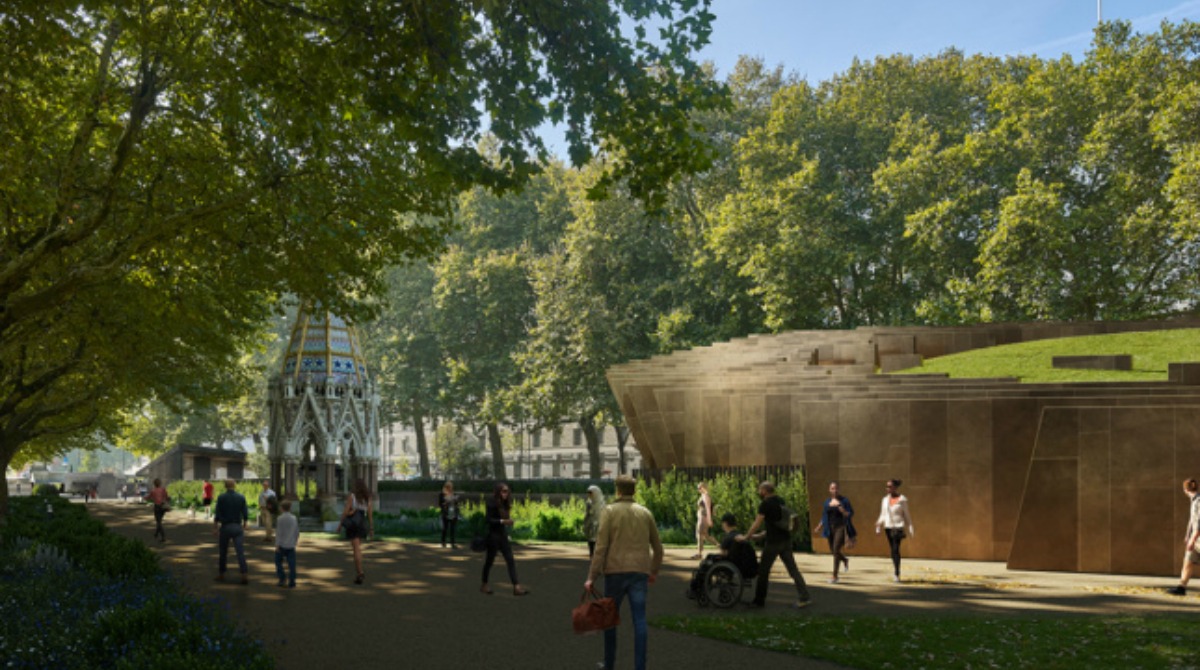 Why aren’t more people speaking out against the misconceived plan to build a Holocaust memorial in Victoria Tower Gardens?

The proposal, currently being considered by Westminster Council, has attracted wide support across the political spectrum but staunch opposition over its impact on the gardens from environmental and heritage groups such as Royal Parks, the Victorian Society and Historic England.

A cross-party group of Jewish peers has also spoken out. There are other opponents but they are keeping quiet – almost certainly because they fear being accused of antisemitism.

On every level, this is a misbegotten scheme. Architecturally it will be an eyesore. Originally constructed with with 23 tall bronze fins, it was likened to a giant toast rack.

A revised design appears to have lowered the fins and allowed for less restricted views of the Palace of Westminster, but it still threatens to stand out in brutal contrast to its gentle surroundings.

The gardens provide a small natural haven in a city which jealously protects its green lungs. The memorial threatens to transform it by crowds of visitors along with traffic to and from the site.

The design lacks either specific Jewish resonance or human sympathy. It will attract opprobrium and dislike, emotions which will inevitably become attached to the victims it memorialises. And it will cost no less than £102 million.

Holocaust memorials in Europe which similarly stick out like a sore thumb have been desecrated or treated with disrespect. The security requirements for this one would add irritating restrictions on public access to the gardens themselves.

The Government has been accused of trying to “rig” the public consultation on the plans after the communities department paid £118,000 to a private company called Big Ideas to promote “public engagement”, which produced a sudden huge surge in supportive comments online.

In the four months after the consultation period opened, there were 144 comments in support with 866 opposing. But in the last two weeks of May, supportive comments soared to 2,391 with just 92 opposing.

Britain has several Holocaust memorials already. The Imperial War Museum just across the river houses an admired Holocaust exhibition, and its own gardens would seem to offer an appropriate site for a London memorial. So why is the government so desperate to erect it in Victoria Tower Gardens?

The proposal was first made in 2016 by David Cameron, who was deeply troubled by rising antisemitism in Britain. Presumably he wanted to make a gesture of support towards the Jewish community, whose leaders gratefully seized upon the proposed memorial as a way of affirming the place of the Jewish community in the nation’s conscience.

The scheme has been called a “national, sacred mission” by Theresa May while all the former prime ministers still alive – David Cameron, Gordon Brown, Tony Blair and Sir John Major – have spoken in its support.

They all seem to have been motivated by a decent instinct to combat antisemitism and Holocaust denial. And situating the memorial next to the seat of power in Parliament itself makes an obvious and symbolic point about the political acceptance of Britain’s Jewish community.

What they all seemed to forget was its likely environmental impact on the rest of the population. And there’s a deeper, darker point to make.

Erecting this memorial against the background of epidemic antisemitism in Britain comes perilously close to humbug. Some who lament most loudly over the Jews slaughtered in the Holocaust simultaneously bash Israel and the Jews today with assumed impunity.

Such people would claim the memorial’s existence proves there is no serious antisemitism in Britain. A memorial to dead Jews will be used as a bronze shield for the bigotry being expressed towards live ones.

Memorialising the Holocaust misses another vital point. The expansion of Holocaust memorials and education programmes has not expunged antisemitism. It has been accompanied instead by an explosion in antisemitism.

This is not to say that the one caused the other; but Holocaust memorialising has not acted as the antidote that was intended.

If we really want to build something to fight antisemitism, it should be a monument to living Jews and the State of Israel to celebrate historic Jewish peoplehood and its survival against all the odds.

Doubtless, community leaders would recoil with horror from such a suggestion and call it divisive. Which tells you all you need to know about the real fight against antisemitism in Britain.