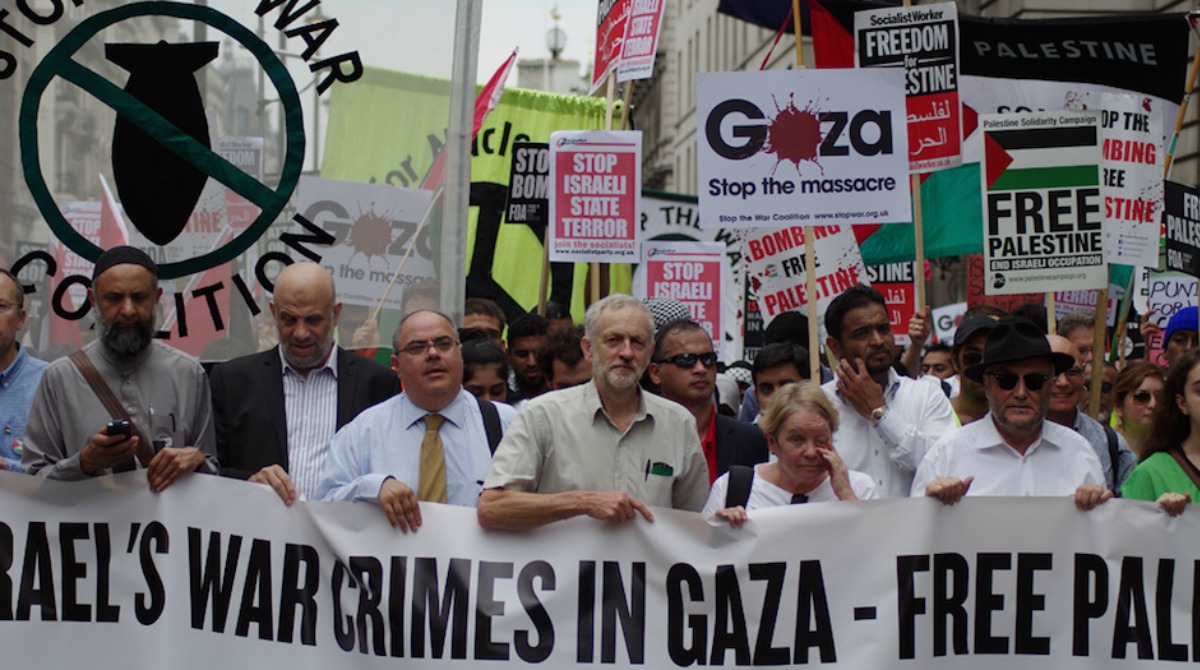 As reported here, a study by the University of Oslo has found that most anti-Jewish violence in France, Sweden, Germany and the UK is committed by Muslim extremists. This is all the more striking considering that Muslims currently make up only relatively small proportions of the populations of these countries.

Scarcely less notable (though no surprise to some of us) is that left-wing violence was the next largest category of anti-Jewish attacks, with right-wing violence trailing into insignificance. Only in Germany were right-wing attacks more numerous than left-wing ones, and then by a relatively small margin.

Last weekend, London hosted an al Quds-day rally. Al Quds-day was introduced to the world in 1979 by the Islamic Republic of Iran “in opposition to the existence of Israel”. The day itself is therefore innately anti-Israel and anti-Jew.

The good news was that the number of marchers, estimated at around 250, was lower than in previous years. Better still, they were stopped from claiming the streets as their own by brave and determined Jewish resistance activists. These faced them down by effectively saying, as the anti-fascists had said of Oswald Mosley’s marchers in London’s East End in the 1930s: “They shall not pass”; and they brought the Islamo-fascists to an unexpected halt.

The bad news was that those marchers were carrying the flag of Hezbollah, the Iran-backed genocidal terror organisation, and screamed vile anti-Israel and anti-Jewish incitement. This took place under the noses of the police who were reportedly following guidance, in accordance with British government policy, that distinguishes the “political” wing of Hezbollah from its terrorist activities.

Hezbollah has committed numerous atrocities against Jews and other westerners, is committed to the destruction of Israel and chants “Death to America”. Just which bit of this programme does the UK government think is “political” and therefore a legitimate contribution to public discourse?

Early next month a Palestinian cultural festival called Palestine Expo – billed as the biggest of its kind in Europe – is scheduled to take place at the QE2 centre in Westminster. It is being organised by the Friends of al Aqsa (FOA). The founder of FOA, Ismail Patel, has openly expressed support for Hamas. In 2009, he told a rally: “Hamas is no terrorist organisation. The reason they hate Hamas is because they refuse to be subjugated, occupied by the Israeli state, and we salute Hamas for standing up to Israel […] to the state of Israel: you no longer represent the Jewish people.”

The Culture Secretary, Sajid Javid, had told FOA he was considering cancelling the event on the grounds of “concerns that your organisation and those connected with it have expressed public support for a proscribed organisation, namely Hamas, and that you have supported events at which Hamas and Hizballah – also proscribed – have been praised”.

Today, however, Javid’s department reportedly told FOA it was “content to let the event proceed.”

That will please Tim Black. In a piece for Spiked published before Javid made his decision, he wrote it would be wrong to ban Palestine Expo just because those involved “have expressed something the state deems unacceptable”. Apparently he thought this unacceptable something amounted to “railing against Israel” and also had “a faintly Islamisty aura”.

Well Hamas isn’t “faintly Islamisty”, nor is it merely guilty of “railing against Israel”. It is an Islamist terrorist organisation which has deranged views about Jews and wants to destroy Israel. It never ceases trying to murder Israelis whether by multiple rocket fire, tunnelling into their kindergartens in order to slaughter their children, slitting the throats of Israeli Jews as they sleep or blowing them up.

It sets out to murder as many Jews as it can. Its sentiments are not merely “fringed with something more deeply antisemitic”. Its foundational covenant, as published in 1988, said this of the Jewish people:

With money they have taken control of the world media – news agencies, the press, publishing houses, broadcasting services, etc. With money they sparked revolutions in various countries around the world in order to serve their interests and to reap profits. They were behind the French Revolution and the Communist Revolution and [they are behind] most of the revolutions about which we hear from time to time here and there. With money they have formed secret organisations, all over the world, in order to destroy [those countries’] societies and to serve the Zionists’ interests, such as the Freemasons, the Rotary Clubs, the Lions, the Sons of the Covenant [i.e. B’nei B’rith], etc. All of these are organisations of espionage and sabotage. With money they were able to take control of the colonialist countries, and [they] urged them to colonise many countries so that they could exploit their resources and spread moral corruption there.

There is no end to what can be said about [their involvement in] local wars and world wars. They were behind World War I, through which they achieved the destruction of the Islamic Caliphate, reaped material profits, took control of numerous resources, obtained the Balfour Declaration, and established the League of the United Nations [sic] so as to rule the world through this organisation. They were [also] behind World War II, through which they reaped enormous profits from commerce in war materials and paved the way for the establishment of their state. They [also] suggested the formation of the United Nations and the Security Council to replace the League of the United Nations [sic] and to rule the world through this [new organisation]. Wherever there is war in the world, it is they who are pulling the strings behind the scenes.

Hamas has recently revised this covenant. It was reported to be taking out these Jew-hating passages, having finally realised they might be somewhat unhelpful to the Hamas PR machine which so wows western Israel-haters. In this interview, however, its spokesman sidestepped the question of whether it had actually done so.

Whatever. Anyone stupid enough to believe that Hamas has suddenly discovered it has no problem with Jews after all might ask themselves this question. If a Nazi organisation suddenly announced it thought Jews were ok after all the deranged things it had said about them for so long, would anyone think it had experienced a genuine change of heart? Of course not.

The new, sanitised Hamas covenant still says, moreover: “We do not recognise the Zionist state. All shapes of occupation, settlements, Judaisation and the forgery of truth are illegal. These rights do not dissolve with time.”(New Charter 2017, Article 18)

And also: “We do not leave any part of the Palestinians’ land, under any circumstances, conditions or pressure, as long as the occupation remains. Hamas refuses any alternative which is not the whole liberation of Palestine, from the river to the sea.” (New Charter 2017, Article 19)

There are also innumerable statements and videos of Hamas people (and also, as you can see here, individuals from Mahmoud Abbas’s supposedly “moderate” Fatah faction) spewing Islam-based hallucinatory hatred of the Jewish people.

There are many others like this. So Hamas remains not only committed to Israel’s destruction (despite the nonsensical spin that it now accepts Israel’s existence within the 1948 “Auschwitz” cease-fire lines) but still peddles the big historical lie that writes the Jews out of their own unique history in, and entitlement to, the land. The Hamas agenda therefore remains profoundly, inescapably exterminatory and Hamas remains profoundly, inescapably anti-Jew.

If a group supporting al Qaeda or Isis, or a neo-Nazi or white supremacist group, were to hire the QE2 centre in Westminster to promote its agenda in “two days’ worth of political discussion and, er, comedy and food stalls” – which was Tim Black’s cosy take on Palestine Expo – would banning that event similarly, as he warned, “harden people’s minds” and “entrench divisions”?

Now that Palestine Expo is going ahead, more people’s minds will indeed be hardened – against Israel on the basis of foul and disgusting lies, bigotry and hatred; and divisions will indeed be entrenched – against Jews who support Israel. But hey, who cares about such Jew-baiting, or that Israel is being delegitimised in order to wipe it off the map?

Tim Black is right about one thing. Support for Hamas and Hezbollah are now “bolted into the leftish mainstream”. That now all-too obvious fact should terrify everyone who may naively have believed the lie that Britain stands united against terrorism, and who previously may have been unaware of the poisonous sewer into which that once lion-hearted nation has allowed itself to slide.