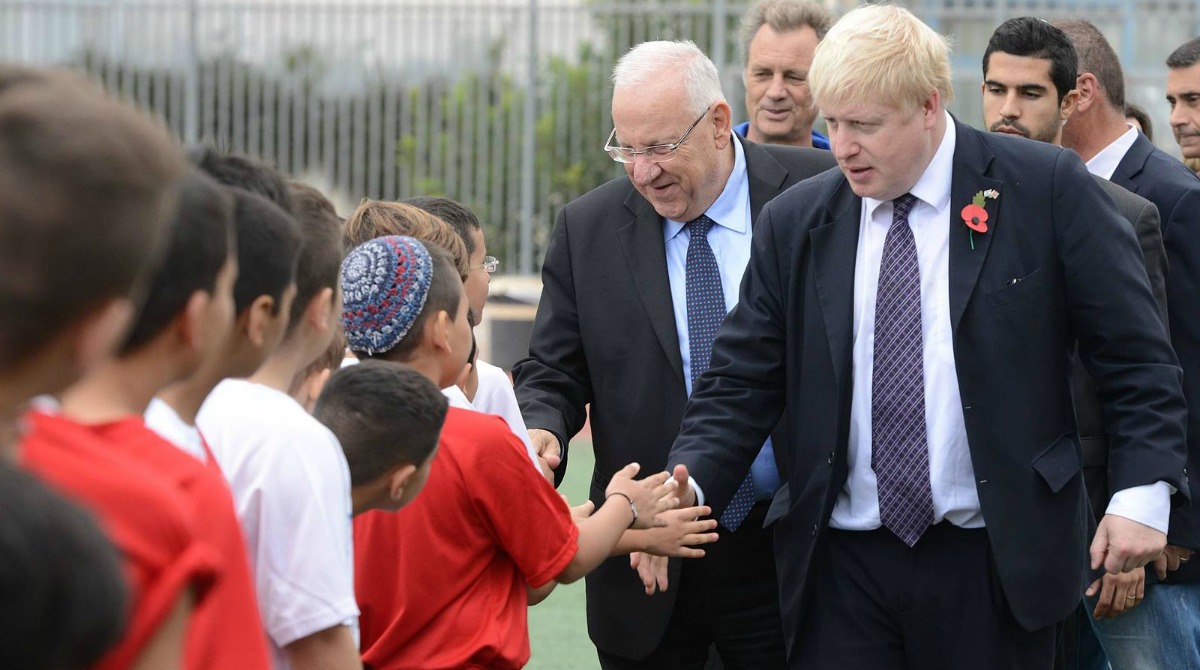 On Tuesday, Boris Johnson was elected leader of the Tory Party following Theresa May’s resignation over her failure to deliver Brexit. On Wednesday, Johnson “kissed hands” with the Queen and thus succeeded Mrs. May as Britain’s PM.

As with all social or political developments of note, the Jewish world is predictably asking about this one: “Will it be good for the Jews?”

Johnson has entertained and scandalized Britain for years through his many scrapes, his jokes, his politically incorrect gaffes, his chaotic personal life, his classically trained erudition — he will surely be the first prime minister to install a bust of Pericles in 10 Downing Street — and his ebullient disregard of boring details, such as facts.

Britain may be convulsed by Brexit, the issue that has brought buccaneering “Brexiteer Boris” to power. He has become prime minister, though, in the middle of a crisis over Iran.

Last week, Iranian commandos hijacked a British-flagged tanker in the Straits of Hormuz. This was reportedly in retaliation for Britain’s seizure off the coast of Gibraltar of an Iranian tanker said to be en route to Syria and thus in breach of E.U. sanctions.

This crisis for Britain is ironic since the British government has not only been vehemently against U.S. President Donald Trump’s withdrawal from the 2015 Iran nuclear deal, which Britain helped draft, but has been working with the European Union to circumvent the resumed sanctions against Iran resulting from Trump’s move.

So will Johnson continue to defy President Trump, who this week lavished the highest possible praise on the new prime minister by suggesting that Johnson was a clone of himself?

As so often, Johnson’s own views on Iran are kaleidoscopic: shake him at various times and a different picture emerges.

In 2006, he raised eyebrows when he wrote that Britain should help Iran get the nuclear bomb on the grounds that it was going to build it anyway.

In 2013, Johnson and I were on BBC TV’s “Question Time” panel. When I observed that Iran was the biggest threat to the West and needed to be neutralized, he scoffed that Iran posed no threat to anyone.

In October 2017, when he was foreign secretary, he expressed optimism that the Iran nuclear deal would survive; he even hailed it as a model for resolving tensions with North Korea.

And yet Ron Prosor, Israel’s former ambassador to the United Kingdom, has written that when Johnson visited Israel as a fledgling MP — at around the same time that he was suggesting that Britain should help Iran get the bomb — he was preoccupied by the Iranian threat to Israel and the world.

Now his views seem to have progressed, if only into further incoherence. Earlier this month, in an interview with Britain’s Jewish News, he strongly advised Iran “to cease this madness, not to take any further steps that would break the terms of the agreement, and not to acquire a nuclear weapon.”

He added: “As Prime Minister, I’d make sure we continue to do everything we can to constrain Iran’s disruptive behavior in the region.” And he says he is prepared to restart Iranian sanctions.

Really? Sanctions would entail Britain also walking away from the nuclear deal. Yet he still seems committed to that deal. At a leadership hustings, he said he still believed that “engaging with Iran and persuading Iran not to go forward with a nuclear-weapons program is the right way forward… ”

He has always expressed strong support for Jews. As London’s mayor, he spoke out strongly against antisemitism and opposed the Boycott, Divestment and Sanctions (BDS) movement.

Yet throughout his tenure as London mayor, Johnson consistently ignored pleas from Jewish groups to ban the Al-Quds Day marches through London, which featured Hezbollah flags and calls to kill Jews.

Israel seems to regard Johnson as a great friend. In a recent interview in Britain’s Jewish News, he repeated his claim to be a “passionate Zionist” and said that “wild horses wouldn’t keep me away” from visiting Israel as Britain’s prime minister.

Yet in 2014, he characterized the Israeli military campaign in Gaza against Hamas as “disproportionate.” On a previous visit to the area in 2004, after a Palestinian suicide-bombing attack in Haifa, Johnson observed that, having seen the humiliation of Palestinians living in Nablus at Israeli checkpoints, he could understand “the frustrations that might produce a cult of suicidal martyrdom… It is all about a sense of powerlessness, and rage, and hatred, and a sense of injustice.”

Recently, though, he condemned the Palestinian policy of paying salaries to terrorists. “I think it’s ludicrous that there should be any kind of financial incentive or compensation for terrorist activities,” he said.

So which is the true Boris Johnson? Some believe that he tailors his views to appeal to whichever audience he wants to reach.

That view may be too sweeping. A rather more accurate assessment, although hardly less unsettling, may be that although he does have genuinely warm feelings towards Jews and the State of Israel, he is also (despite his Brexiteer credentials) a liberal universalist.

That means he believes that everyone is a rational actor, which means he thinks everyone is susceptible to appeals to temporal self-interest, that murderous fanaticism is caused by material circumstances, and that therefore deals can and should be done with the devil.

As a result of these illusions, despite his warm feelings he may not always act in the best interests of Israel or the Jewish people.

The most immediate concern, however, is whether the Brexit crisis and resulting political instability will sink Johnson and bring to power Labour’s far-left, venomously anti-Israel leader Jeremy Corbyn, who is still refusing adequately to address the antisemitism that has erupted in his party and is in large part exacerbated by him.

Johnson was elected leader of the Tory Party because its members are overwhelmingly determined to leave the E.U., with or without a withdrawal deal, on the already twice-postponed exit date of Oct. 31. Johnson convinced them he will achieve this “do or die.”

His problem, however, is that the majority of Parliament members are Remainers who are determined to stop a no-deal Brexit by any means.

London has been electrified by the government Johnson has now assembled in which Brexiteers have been placed in all key positions. This amounts to a declaration of war against those in both parliament and the civil service who are intent on frustrating the “will of the people” to leave the E.U.

But with a tiny overall majority, it’s hard to see how Johnson can avoid a general election very soon. This threatens unforeseeable consequences, with voters’ hitherto tribal party loyalties splintering down the Brexit/Remain chasm.

If Johnson could attract both conservatives and Labour supporters who feel utterly betrayed by the failure to deliver Brexit, he could destroy a Labour Party whose Remain supporters, many alienated by the antisemitism crisis, will be split between Remain-leaning Labour and the fanatically Remainer Liberal Democrats.

If, however, he was seen to be backsliding on Brexit he would be finished and so would the Tory party — paving the way for some kind of coalition of Labour, LibDems, Scottish nationalists and Greens, which would be very bad for Israel and British Jews (and Britain).

The next phase of Britain’s revolutionary moment is upon us. Buckle up.